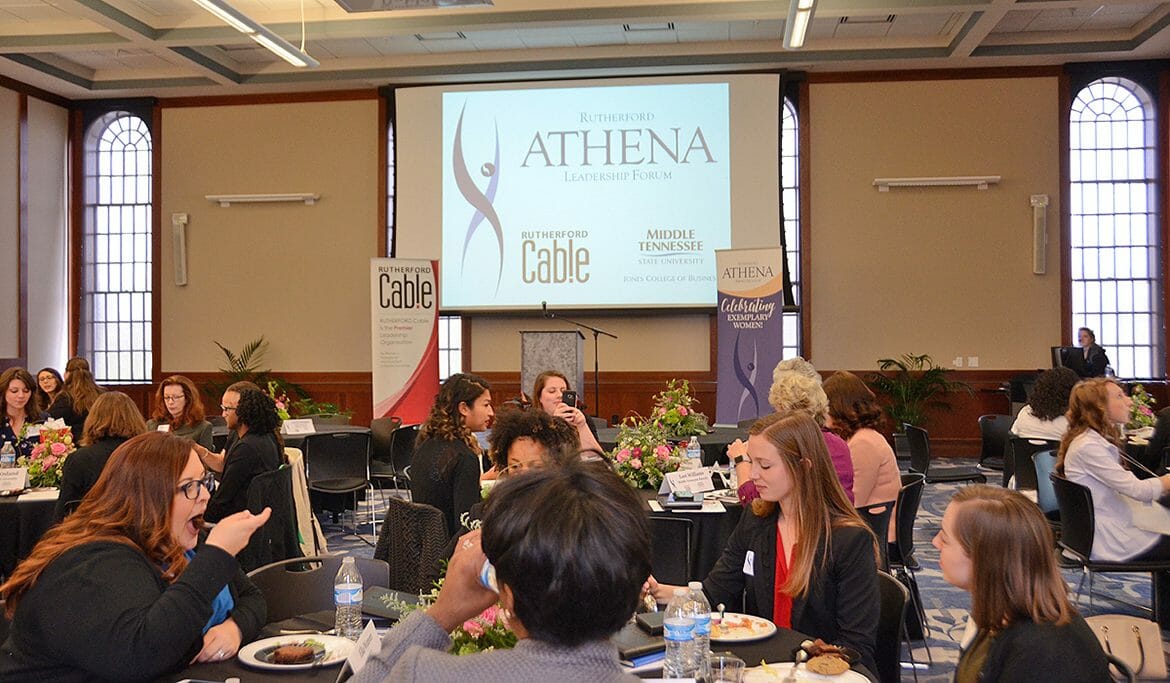 For MTSU student Stephanie Carpenter, attending the third annual Rutherford ATHENA Leadership Forum was a natural progression along her academic journey to strengthen her leadership skills for a future in the nonprofit arena.

“It’s become a big part of who I am, to want to be a leader and help others learn how to become a leader,” said the senior psychology major from Gordonsville, Tennessee, on schedule to graduate in May with minors in nonprofit management and social welfare.

Hosted by MTSU’s Jennings A. Jones College of Business in association with the Rutherford Cable women’s professional development organization, the forum’s objectives are to identify emerging women leaders among the best students; keep talented emerging leaders in Rutherford County; and connect these students with established women leaders in Rutherford Cable through networking, roundtable discussions and professional development opportunities.

Dr. David Urban, dean of Jones College, said the invited students come primarily from within in the Jones College and University Honors College. Held at the MT Center inside the Ingram Building, the event features guest speakers on topics such as professional development, attire and personal branding. Students also have the opportunity to have professional photograph taken for their portfolios.

A key goal of the forum is to “help the students build a network of contacts that they can utilize when they graduate” by interacting with the “very highly accomplished women” from Rutherford Cable, including a number of female MTSU faculty.

“Every year that we’ve had it, students have really liked it,” Urban said.

Programs await attendees of the third annual Rutherford ATHENA Leadership Forum held March 23 at the MT Center in the Ingram Building at MTSU. The event was hosted by the Jones College of Business in connection with Rutherford Cable. (MTSU photo by Jayla Jackson)

Carpenter, an Honors College student, said when she became an RA (resident assistant) her sophomore year, she started to develop her leadership skills “and really understand what it was.” Attending the ATHENA forum was “probably the best thing I’ve done in a long time as far as networking … and I’m really glad I came,” she added.

During table discussions with Cable mentors, Carpenter said she picked up a bit of helpful advice about establishing a nonprofit board as she seeks to start her own nonprofit, an anti-bullying organization called Through the Mind and into the Heart.

Carpenter will be presenting her journey during the upcoming Nonprofit and Social Innovation Summit at MTSU and plans to pursue training courses at the Center for Nonprofit Management in Nashville.

Featured speakers for the forum included Mila Grigg, CEO of MODA Image and Brand Consulting who spoke on “Your Personal Brand”; and Margaret Morford, CEO of The HR Edge Inc. who spoke on “Courage at Work—Having the Heart of a Lion.”

Rutherford Cable members in attendance represented companies ranging from State Farm to Tennessee Valley Authority and from the Rutherford Chamber to the Federal Reserve.

“This is just another example of how the Jones College and MTSU interacts with the community,” Urban said. “We want these students when they graduate to stay here … to contribute to the economic development of the region.”

The forum is also financially supported by the Jennings and Rebecca Jones Foundation.