Some budding athletic trainers have earned their way into the finals of a national tournament to show how much they know about their major. 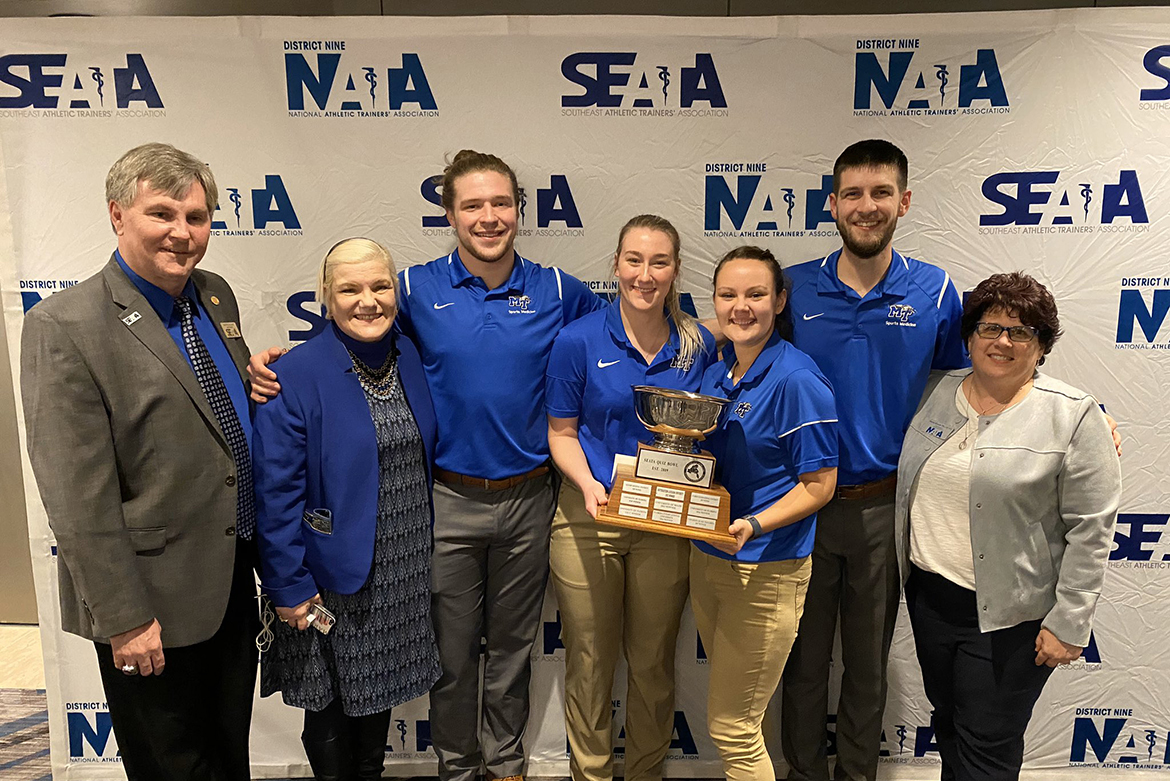 This is the first victory in the nine years MTSU has competed in the regional Quiz Bowl, and it is the first ever victory by a Tennessee team. The MTSU students will advance to the National Athletic Training Association’s annual competition in Atlanta in June to face the rest of the country’s brightest athletic training majors in a test of their knowledge.

MTSU’s team members said they prepared for the contest categories by going over their classwork, homework and tests individually. They faced challenges in categories such as anatomy, psychomotor skills, musculoskeletal conditions, fractures and just about any situation professional athletic trainers could encounter.

“As a senior, I’m studying for our board of certification exam this coming April, and those are the exact kind of questions that are going to be on the exam,” said Andrew McAllister, a senior from Troy, Ohio, and a Quiz Bowl participant.

The contest’s format resembles that of the game show “Jeopardy.” There are Jeopardy and Double Jeopardy rounds in which the first contestant to click his or her clicker may respond to each answer with a question. Points are awarded for correct responses and subtracted for inaccurate responses.

“It shows them, yes, I did actually learn something in class, and it shows them areas where they need to go back and study again,” said Helen Binkley, an associate professor in the Department of Health and Human Performance and director of MTSU’s Athletic Training Program.

The MTSU team was in third place going into the Final Jeopardy round. The contestants had to know the name of the NATA executive director, Dave Saddler. No one responded correctly, but other teams lost so many points in the round that MTSU came out on top with a total of 8,064 points.

“Everybody who came with us to SEATA started screaming,” said Mary Tate, a sophomore from Humboldt, Tennessee, and an MTSU team member. “We were jumping up and down up front because we realized we actually won.”

In addition to the opportunity for students to exhibit and improve their knowledge, the Quiz Bowl and the symposium provide a showcase for the profession of athletic training.

“Athletic training is a medical profession that is recognized by the American Medical Association,” said Binkley. “We take care of athlete and physically active patient populations, preventing injuries and (caring for them) from the time they’re injured through the entire rehabilitation process.”

In addition to sports, Binkley said professions which have need for athletic trainers include the performing arts, first responders, industries, physician’s offices and the military.

For more information about the MTSU athletic training program, visit https://www.mtsu.edu/programs/athletic-training/ or contact Binkley at 615-904-8192 or helen.binkley@mtsu.edu.