ATLANTA, Ga., and CHATTANOOGA, Tenn. — Zachary Zanowski and his father, Steve, traveled five hours one way from the Charleston, South Carolina, area to Atlanta to learn more about the Middle Tennessee State University mechatronics engineering program he will be entering in January.

Breana Manning and her mother, Mary, drove about an hour from Calhoun, Georgia, to Chattanooga, Tennessee, to discover all MTSU has to offer the prospective student with a 4.0 GPA and 32 ACT score, who’s also heavily involved with 4-H and leadership in Gordon County and planning to pursue biology or forensic science wherever she lands. 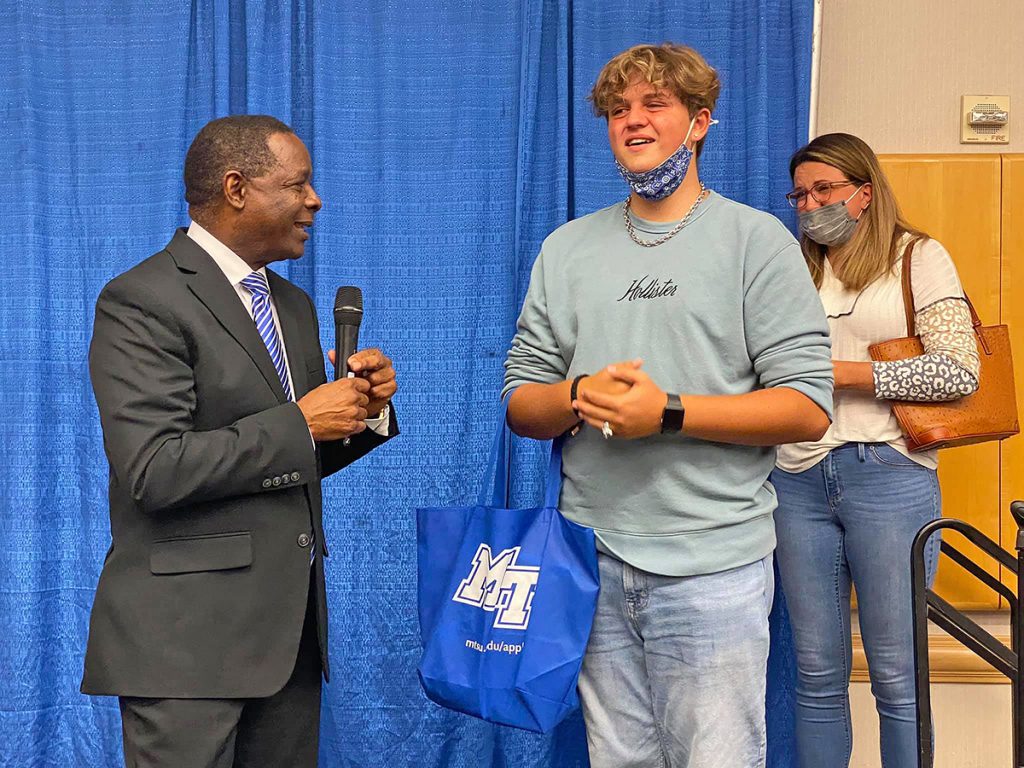 MTSU President Sidney A. McPhee, left, listens as Mason Taylor, a senior at Marion County High School in Jasper, Tenn., shares how much he has wanted to attend the Murfreesboro university after winning a $10,500 scholarship during the recent True Blue Tour recruiting event at the Chattanooga Convention Center. Dozens of students and their families attended the event, gathering material and getting their questions answered by MTSU staff. (MTSU photo by Andrew Oppmann)

To view video from the Chattanooga event, go here.

MTSU is in the midst of recruiting new and transfer students for 2022 and beyond. The university travels across Tennessee and to five major cities out of state to share what MTSU offers in terms of academic programs, financial aid, guaranteed scholarships, housing and much more. 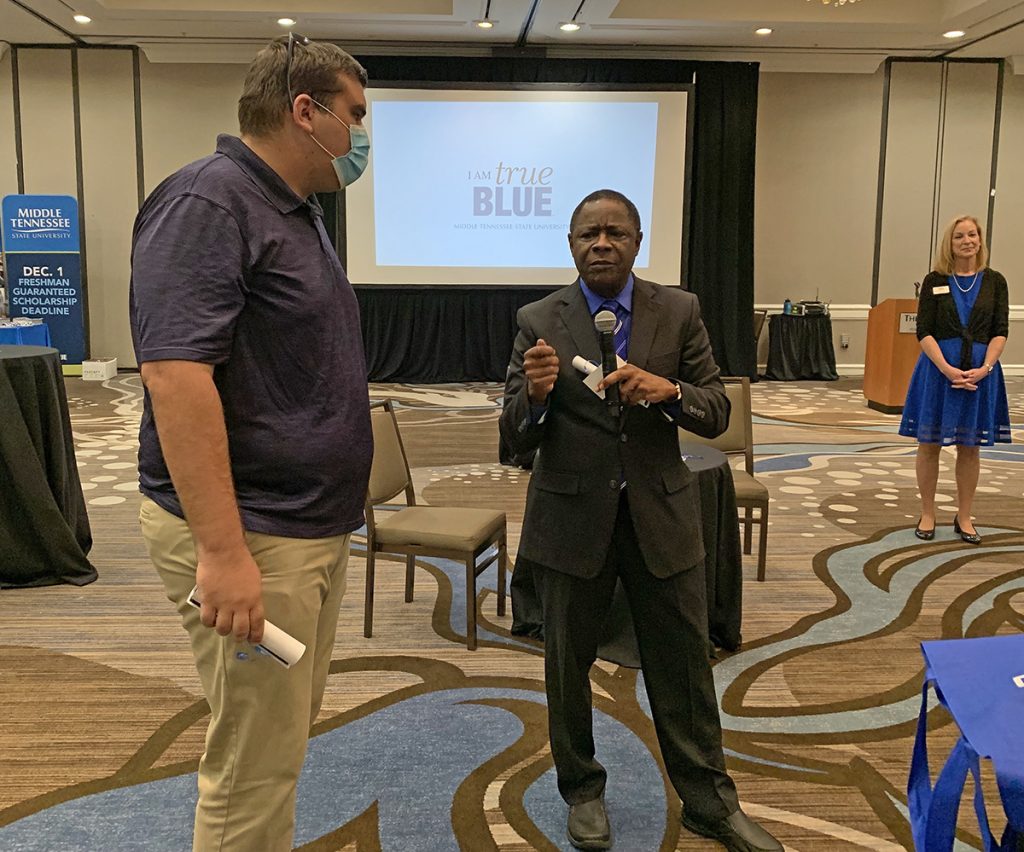 MTSU President Sidney A. McPhee, right, awards Zach Zanowski of Summerville, S.C., a $1,000 scholarship and gift certificate to the MTSU Phillips Bookstore after learning of the student’s plans to transfer into the MTSU mechatronics engineering program in January. Zanowski and his father, Steve, drove five hours one way to attend the True Blue Tour event at The Westin Atlanta Perimeter North on Oct. 19. (MTSU photo by Randy Weiler)

Zach Zanowski, 20, of Summerville, South Carolina, attends Trident Technical College in North Charleston, studying in a robotics apprenticeship program. An Academic Common Market option with mechatronics will provide a 48% discount on out-of-state tuition. In Sandy Springs/Dunwoody at The Westin Atlanta Perimeter Perimeter, he received a $1,000 scholarship.

“It was worthwhile to drive all the way here,” he said. “I know it’s a good program. There’s not many mechatronics programs — and none in South Carolina.” The Zanowskis will visit campus in December, touring and finalizing housing plans.

Breana Manning fully intends to apply for an MTSU Honors College Buchanan Fellowship, the highest academic award a student can receive to attend MTSU. Her family lives on a 10-acre farm and she helps with an extended family 154-acre farm. The “very competitive” young woman is involved in public speaking, livestock and dairy judging, national ambassador for shooting sports and more. 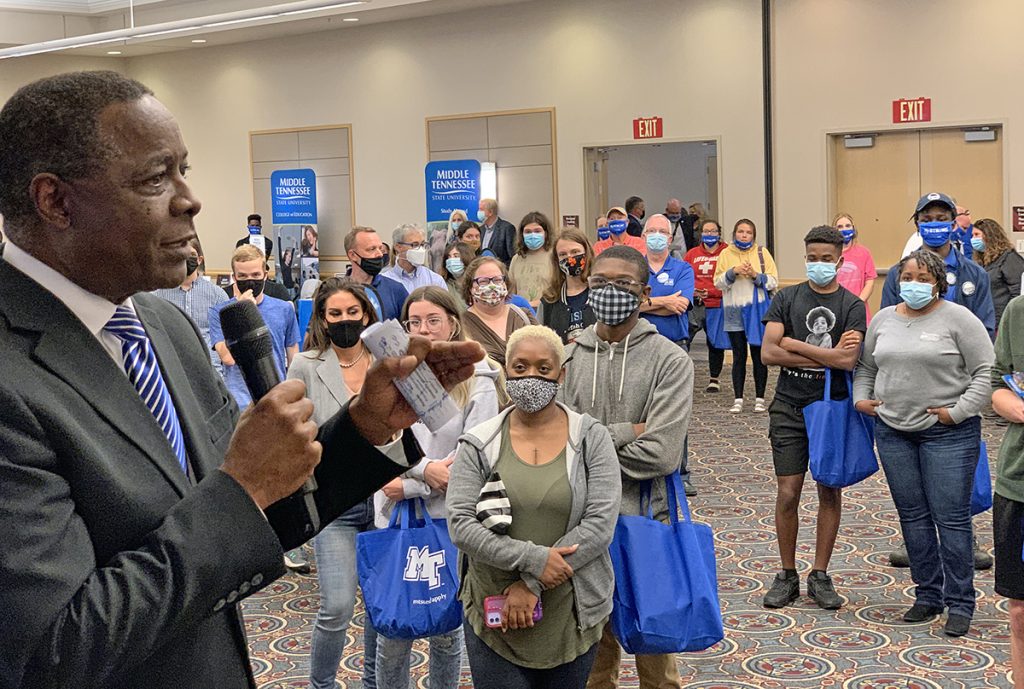 MTSU President Sidney A. McPhee, right, talks to prospective students and their parents attending the True Blue Tour event recently at the Chattanooga Convention Center. The students and family members came from across the area, seeking information about the university to help them make their decision on a college choice. Numerous MTSU academic colleges and other departments answered questions and provided material they can take with them. (MTSU photo by Randy Weiler)

An emotional Mason Taylor of Marion County High School in Jasper, Tennessee, walked away with a $10,500 scholarship from MTSU at the Chattanooga event, held at the Chattanooga Convention Center. He plans to study computer science.

“Ever since I was younger, MTSU is where I’ve always wanted to go,” he said.

Madison McElhaney, 17, of Red Bank, Tennessee, whose parents, David and Kristie McElhaney, are Hamilton County K-12 educators, won an $8,500 scholarship. The Hixson senior plans to study nursing. At age 8, she was diagnosed with Legg-Calve Perthes Disease, a condition affecting the hip.

“I like the community (atmosphere),” said McElhaney, a bowling team member and wrestling manager.

That night, MTSU awarded nine scholarships for a total of $38,500. During the luncheon earlier in the day, nine counselors/community college staff won scholarships totaling $14,250 to award to their students.

In Atlanta, students walked out with $31,500 in scholarships.

“A really surprised” Devin Crowder, 18, a senior at Sequoyah High School in Canton, Georgia, won a $7,500 scholarship. “I’m really interested in music business and would like to know more about it,” he said. 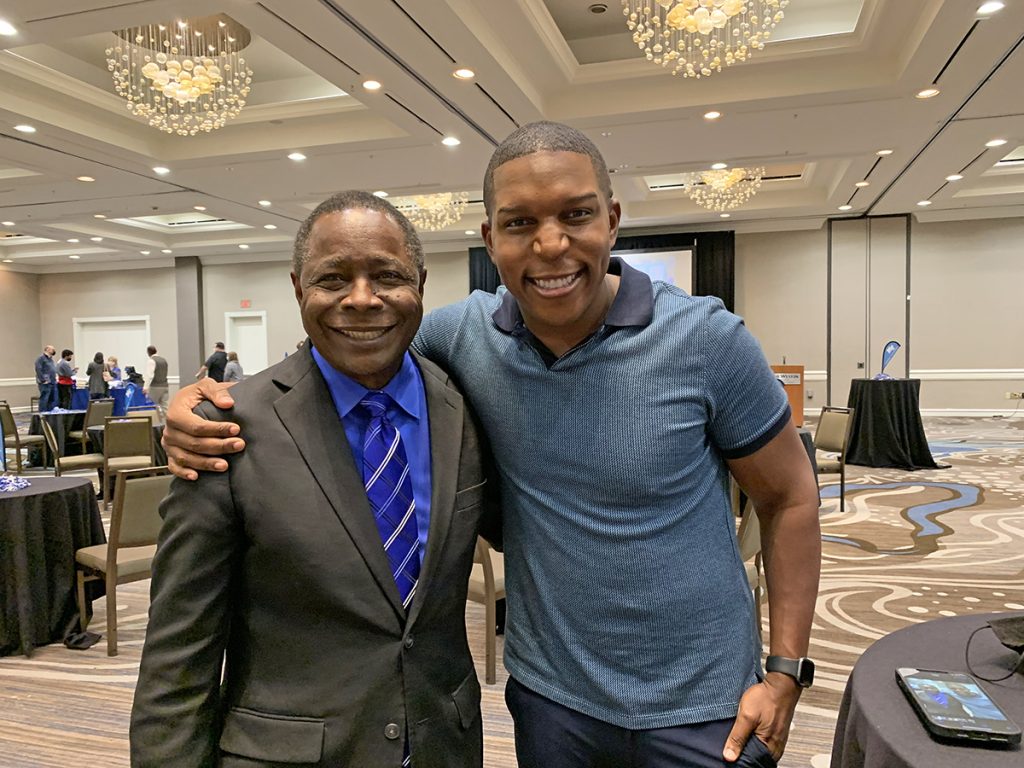 MTSU alumnus Jonathan Stacey broke away from his meteorologist position with Fox 5 Atlanta to attend. He shared with students how “MTSU is the gold choice. Why stick around (here) when you can go somewhere with outstanding programs?” He entered MTSU in 2010 and graduated in three years.

Col. Barry Melton (Class of 1982) of Cleveland, Tennessee, a longtime Civil Air Patrol member, attended the Chattanooga event. He is a member of the 2021-22 MTSU Distinguished Alumni, who will be recognized later this week during homecoming. He earned the Citation of Distinction for Service to Community.

A number of alumni, who are counselors in the Chattanooga area, attended the luncheon there. They included Amy Glancy (’13), who “has students who could use the money.” She will award $1,625 scholarships to two Red Bank seniors, “providing more opportunities for students to go to a great school.” 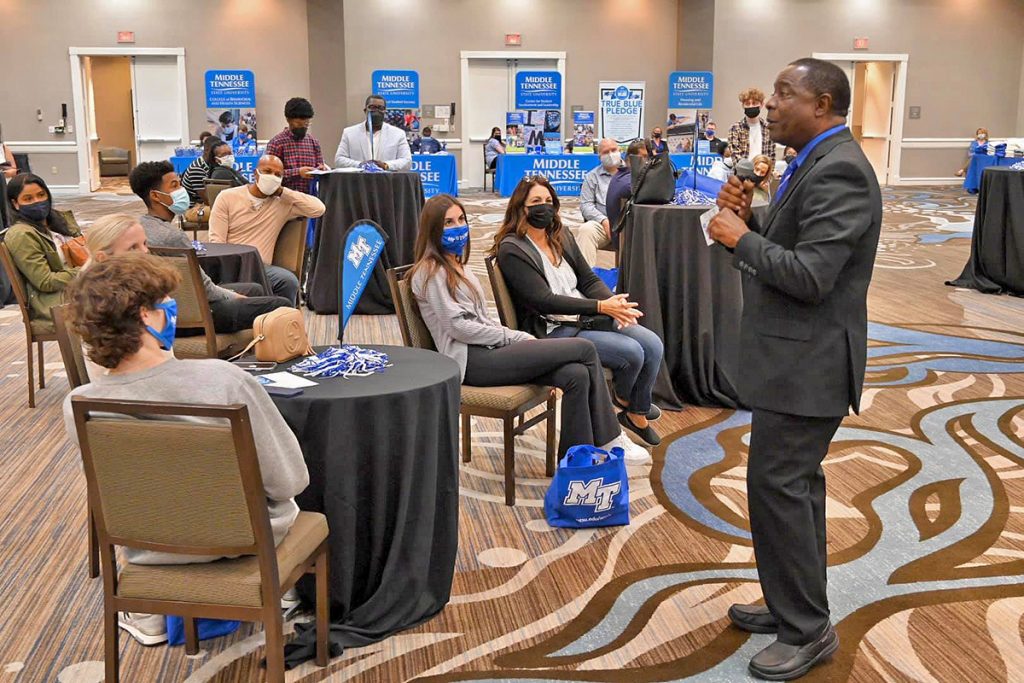 On deck: Johnson City and Knoxville 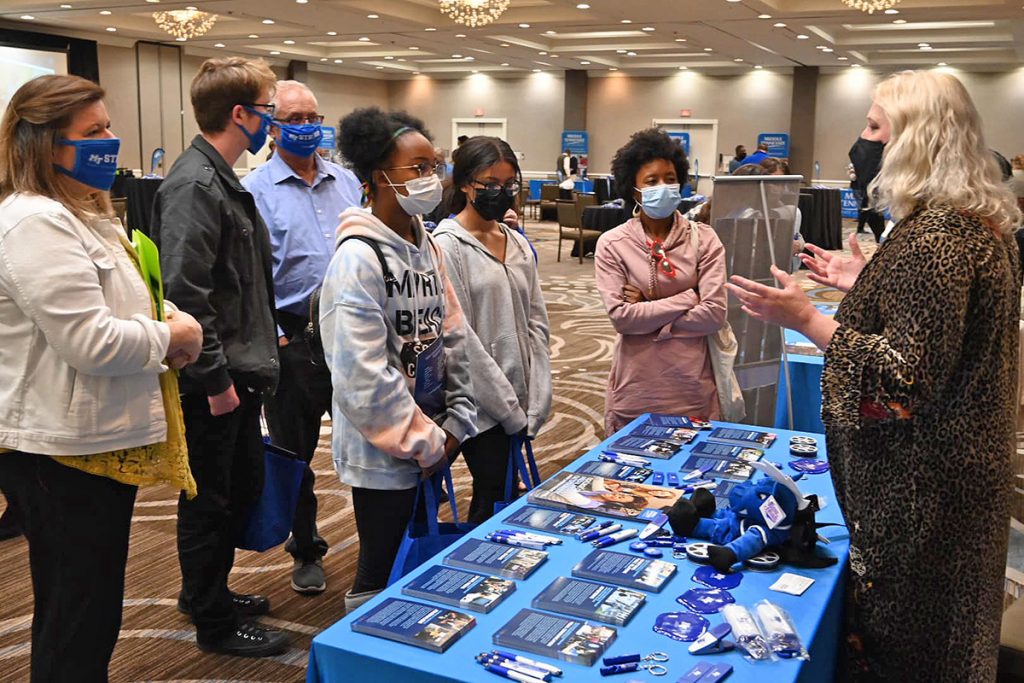