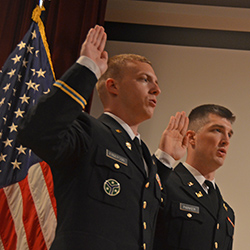 Jeffrey Enderson of Smyrna, Tennessee, and Damian Parker of Centerville, Tennessee, are two of the military’s newest members.

U.S. Army Major Jason Beck, a public affairs officer for the Southeast medical area support group at Fort Knox, Kentucky, was guest speaker. His primary message to Enderson, 26, and Parker, 25, was about trust.

Both Enderson and Parker are degree candidates for the Saturday, Aug. 8, commencement in Murphy Center.

A psychology major, Enderson will graduate with a bachelor’s degree in psychology. He received a reserve forces duty commission into the military intelligence branch of the Tennessee Army National Guard.

Parker, a criminal justice major, received a commission in the engineer branch of the U.S. Army reserves. He plans to pursue his master’s degree in engineering management at MTSU.

As his mother Brenda Enderson, right, of Smyrna, Tennessee, watches, Jeffrey Enderson has his second lieutenant bars pinned on him by his father, Scott, Aug. 7 during the MTSU military science ROTC commissioning ceremony in the Keathley University Center Theater. Jeffrey Enderson, who is a psychology major, will graduate Saturday, Aug. 8, during the university’s summer commencement in Murphy Center. He received a reserve forces duty commission in the Tennessee Army National Guard in the military intelligence branch. (MTSU photo by Randy Weiler)