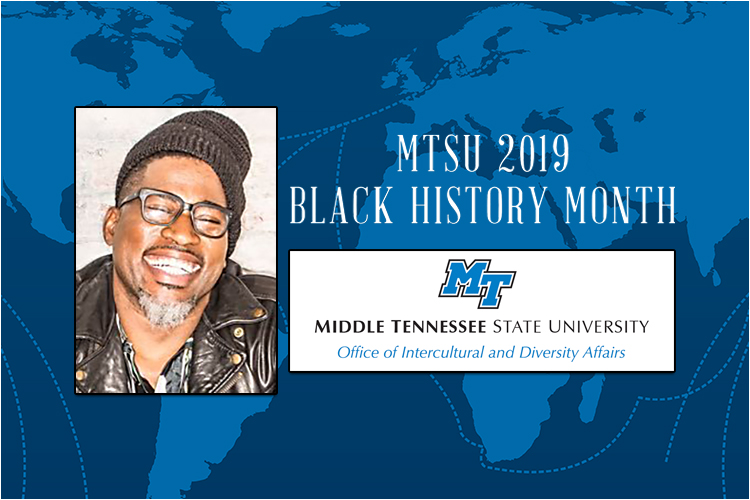 MTSU will wrap up its 2019 Black History Month celebration with a visit from a Grammy Award-nominated keynote speaker Thursday, Feb. 28.

David Banner will speak at 7 p.m. Feb. 28 in the Student Union Ballroom. His talk is free and open to the public; a campus map is available at http://tinyurl.com/MTParkingMap.

The multitalented Banner, born Lavell William Crump in Jackson, Mississippi, has distinguished himself as a singer, composer, producer and actor.

Beginning his career as part of the rap duo Crooked Lettaz in the late 1990s, Banner broke out on his own with his debut solo album “Them Firewater Boyz, Vol. 1” in 2000. His single “Like a Pimp” received major airplay.

Along with his innovations in the recording industry, Banner is an outspoken activist and commentator on African-American issues and culture. In a June 29, 2018, article in Billboard magazine, Banner encouraged hip-hop artists to strive for more balance in their lyrical depictions of black people.

“Talk about more than the stereotypical things white people think about us,” Banner said in the article, “’cause really what we’re doing is pandering to white people … So we need balance, you feel me? We don’t want to broadcast to the world that black people are just one way.”

Banner’s current album, “The God Box,” includes a symphony orchestra and attacks racism, police brutality, misogyny and white artists’ co-opting of black music. He personally financed the project to have the kind of creative control he said he fears is disappearing in the digital era.

“We’ve allowed the artists to not get paid anymore — they get paid fractions of pennies — and we pay big corporations instead,” Banner told Billboard. “Now we have to beg companies to pay (corporate streaming services) to stream our music, and then they give them the money! That’s not right! But if you say anything about it, then you get shut out.”

Banner’s acting credits include the films “The Experiment,” “The Butler” and “Ride Along” and the music video for the song “Confessions” by Lecrae.

He has produced music for artists including T.I., Jill Scott, Chris Brown, Maroon 5, Lil Wayne and Ne-Yo and also is the founder of A Banner Vision, a multimedia company that provides music for television commercials, video games and films. His co-producing work on Lil Wayne’s “Tha Carter III” album earned the triple-platinum-selling project a 2009 Grammy for best rap album and a nomination for album of the year.

For more information about the lecture, visit www.mtsu.edu/aahm or contact Daniel Green, director of the Office of Intercultural and Diversity Affairs and chair of the university’s Black History Month Committee, at 615-898-5812 or daniel.green@mtsu.edu.