Audiences can stay in to go ‘Outside of Here’ Oct....

Audiences can stay in to go ‘Outside of Here’ Oct. 2 for MTSU professor’s new Nashville-acted TV, web play 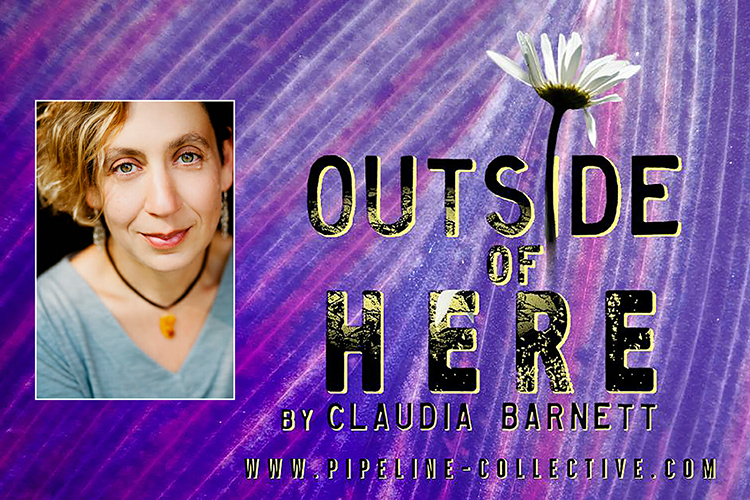 In a world where many Americans need our remote controls surgically removed to step away from DVR binge-watching and scrolling streaming services, an MTSU English professor has helped create a compelling lure back into the big comfy chair with a bowl of the good snacks.

The production also will stream live at the NECAT Network website and at Pipeline-Collective’s Facebook event page.

In Barnett’s play, a woman receives an unexpected guest. When she refuses to leave her home, the guest entices her with poignant and joyful visions of the world outside. When one guest leaves, another arrives, and the scene repeats, with near-imperceptible shifts in text and tone.

Reminiscent of “Playhouse 90” and other early-TV live anthology series, this 12-hour production allows one character to experience one story dozens of times over with dozens of different characters. Each hour features a different set of actors, who’ve never rehearsed together for this play; the first time they’ll share space is on Oct. 2.

A teaser trailer is available below.

Barnett, who teaches Modern Drama, Playwriting and Science Plays courses in MTSU’s Department of English, serves as the department’s writing minor adviser and the coordinator of In Process: A Creative Writing Event Series. She also is a playwright who creates experimental productions about women and history and science.

She says Pipeline-Collective producing artistic directors David Ian Lee and Karen Sternberg contacted her with an idea for a 12-hour show and asked her to write it.

“I was immediately intrigued by the impossibilities, and of course I said yes,” she recalls. “The two plays that stayed in my head the whole time I was writing are Samuel Beckett’s ‘Endgame,’ with its characters seemingly trapped at the end of the world — and which includes the line ‘Outside of here it’s death’ — and Eugène Ionesco’s ‘The Bald Soprano,’ with its incessant, nonsensical repetitions.

“And while there are many plays in which one actor plays multiple characters, who ever heard of multiple actors playing one character? That’s essentially what we have here. One role, ‘Her,’ will be played by Karen, but the other is a revolving role written for 32 actors. One-character plays are eminently practical. This project is exactly the opposite, which is another reason it appealed to me.”

They and the entire “Outside of Here” crew have been vaccinated and will be following safety guidelines issued by the Centers for Disease Control and Prevention, Metro Nashville government and the performing artists’ unions on Oct. 2, including wearing masks for the duration of the performance unless they’re on camera.

The production won’t have a live studio audience, either. Producers are limiting access to and occupancy of the performance space to keep cast and crew safer.

“Innovation is key to the work we do,” says Lee, who’s also the “Outside of Here” co-director with Melinda Sewak. “We believe in theatrical magic on a shoestring budget, and ‘Outside of Here’ is stretching us in many ways.

Adds Sternberg, who’ll be onstage for the 12-hour duration: “Being able to realize this massive yet safe project with dozens of local performers and technicians after so much time physically apart is deeply gratifying. And working with Claudia Barnett, who’s one of the most poetic playwrights we know, has been the perfect fit for this project.”

The 12-hour performance of “Outside of Here” is free for viewers. Any donations will be shared among the artists; more details are available in the video below.

For more information and to support the production of “Outside of Here,” visit www.pipeline-collective.com.

For more information on the programs in MTSU’s Department of English, visit www.mtsu.edu/english. More details on the College of Liberal Arts at MTSU, of which the English department is a part, are available at www.mtsu.edu/liberalarts.