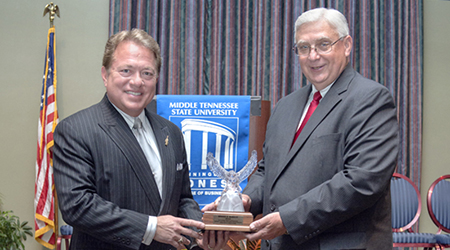 The Jennings A. Jones College of Business presents that award annually “to a businessman who has demonstrated the best of the spirit of America through significant contributions in government, education, and/or civic and charitable organizations.”

Barrett is the founder and CEO of Barrett Firearms Manufacturing Inc., located in Murfreesboro and most famously known as the maker of the .50-caliber rifle. A native of Murfreesboro, Barrett built his company into a multi-million-dollar business that serves all branches of the U.S. military as well as over 73 different governments.

The award was established in honor of former U.S. Ambassador to France Joe Rodgers, who was the inaugural chairholder of the Jennings A. Jones Chair of Excellence in Free Enterprise.