Bass shares ‘Life at the Body Farm’ in Murphy Cent...

Bass shares ‘Life at the Body Farm’ in Murphy Center 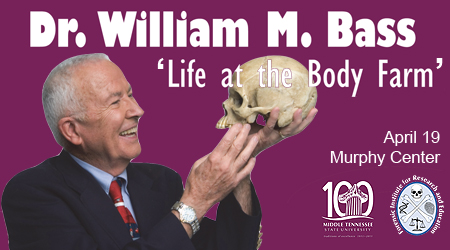 Dr. William M. Bass talks about the beginnings of the Tennessee Body Farm in Knoxville during the William M. Bass Legends in Forensic Science Lectureship at Murphy Center April 19. (photo by Andy Heidt)

Speaking at MTSU April 19 as part of the MTSU Legends in Forensic Science Lectureship that bears his name, Bass told a crowd of nearly 500 that a consultation with Kansas investigators made him realize the necessity of studying how bodies decay.

“These rustlers were leaving carcasses on the ranches, and the investigators wanted to know how long they’d been dead so they could make some arrests,” he explained. “I told them to get a rancher to let me kill a cow and look at it every day and see what happens when it decays.”

He then realized he’d need four cattle—one for each season—to determine a time of death with even greater specificity.

“Ultimately, nothing happened there (in Kansas),” Bass said to a chorus of “oh no’s” from the audience, “but that was the beginning of the idea of the Body Farm. I came to UT-Knoxville (in 1971) and thought more about it. And it wasn’t long before dead (human) bodies started coming to my office.”

With more than 30 years of experience in the field, Bass is considered one of the nation’s foremost forensic anthropologists. The “Body Farm” he founded, now known as UT’s Forensic Anthropology Center, enables students to study the rate of decomposition of human remains in both natural and controlled environments.

The Body Farm has been featured in fiction and nonfiction books as well as television programs such as “The Dead Zone” and “CSI: Crime Scene Investigation.”

While the crowd alternately cringed and chuckled at Bass’s stories of a career founded in scientific research, he offered just-this-side-of-gruesome photos as well as basic entomology lessons familiar to anyone who’s watched a few TV police-procedural dramas.

“The basis of the Body Farm is knowledge,” he said. “The difference in us and ‘CSI’ is on ‘CSI’ you have someone in high heels and high fashion coming out and solving a crime. We depend on law enforcement to do that. We provide the information. We don’t go to the family or the suspect; a real crime-scene investigation consists of a team effort.”

Bass saluted his former teaching and research assistant, MTSU’s Dr. Hugh Berryman, noting that he even made Berryman a hero in one of the books he’s co-written with Jon Jefferson under the nom de plume “Jefferson Bass.”

While explaining how much he owed to his former professor and mentor, Berryman, who is director of MTSU’s Forensic Institute for Research and Education, recalled that after his first class at UT with Bass, he realized that “we had laughed through the entire class period.”

“Then I looked down and saw I’d taken seven pages of notes while doing all that laughing,” said Berryman. “I said then, ‘THAT is how you teach a class.’”

Bass autographed numerous books, including Flesh and Bone, Carved in Bone and Death’s Acre, and spoke extensively with audience members during the book-signing session that followed his lecture.

Along with FIRE, the Bass lecture’s sponsors include the MTSU College of Liberal Arts; the College of Basic and Applied Science; the College of Health and Behavioral Sciences; the College of Graduate Studies; the University College; Phillips Bookstore; the Departments of Biology, Chemistry, Criminal Justice, and Sociology and Anthropology; the MTSU Distinguished Lecture Fund; the Centennial Committee; Middle Tennessee Forensic Science Society; and the Office of the University Provost.