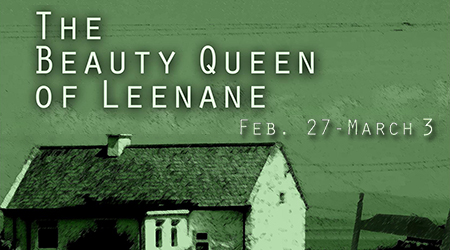 MTSU students will take audiences to the Irish village of Leenane, Connemara, in County Galway when Tucker Theatre lifts the curtain on “The Beauty Queen of Leenane” on Wednesday, Feb. 27.

Directed by Professor Kyle Kennedy, “The Beauty Queen of Leenane” features a cast of four, including Nashville actress Kelly Lapczynski, an MTSU alumna, as guest artist.

“The Beauty Queen” performances at MTSU are scheduled Feb. 27-March 2 at 7:30 each evening. One matinee performance is planned at 2 p.m. Sunday, March 3.

“The Beauty Queen of Leenane,” set in the 1990s, depicts Mag, a 70-year-old woman, and Maureen, the 40-year-old daughter who takes care of her. With deception, manipulation and heartbreak hovering over Maureen’s life, her last chance of happiness lies in the hands of Pato, the man with whom she’s fallen in love.

Nominated for an Olivier Award as Best Play for its London production and a four-time Tony Award winner for its 1998 Broadway production, “The Beauty Queen” is “a dark, sardonic comedy … that keeps the audience enthralled and at the edge of their seats,” said director Kennedy.

For more information about the show, or to buy tickets online, visit www.mtsu.edu/tuckertheatre/PurchaseTickets.php and click on the “Beauty Queen of Leenane” poster. You also can call 615-494-8810.