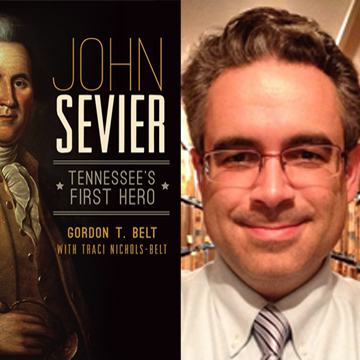 Unraveling the myths and legends surrounding one of Tennessee’s founding fathers was the focus of a recent edition of the “MTSU On the Record” radio program.

Host Gina Logue’s interview with MTSU alumnus and historian Gordon T. Belt first aired Aug. 25 on WMOT-FM (89.5 and www.wmot.org ). You can listen to their conversation here.

The book explores Sevier’s leadership in a battle against British loyalists at Kings Mountain, his reputation as an Indian fighter and his formation of the state of Franklin, the predecessor to the state of Tennessee, out of lands belonging to North Carolina.

“A lot of what we know, or what we think we know, about him is wrapped up in these embellishments written by men who were respected,” Belt said.

“The true essence of this man, I think, has yet to be revealed. There’s so much about him we know, and there’s so much we don’t know.”

A video clip of the interview may been seen below.