Home prices continue to increase across the state and are at their highest level in the past decade, according the latest quarterly housing report from the MTSU Business and Economic Research Center.

See the full current and previous reports with detailed breakdowns and summaries by going to http://mtsu.edu/berc/housing.php and clicking the appropriate links.

All three regions of the state have experienced growth in home closings over the year, though the data indicate slower activity in closings throughout Nashville, Knoxville, and Memphis since the beginning of 2018.

Quarterly inventories increased in all three areas with Nashville leading at 14.26 percent, followed by Knoxville with 2.18 percent and Memphis with 3.03 percent.

“This may indicate a small correction in the market for home sales, as closings in all three areas are at a low since the beginning of this year,” Arik noted.

Nashville’s closings have steadily declined while its inventory has continually increased since the beginning of the third quarter.

Tennessee saw growth in single-family, multifamily, and total construction permits from the last quarter as well as year over year.

Home prices continued their positive trend across the state, with increases across all Metropolitan Statistical Areas, or MSAs, tracked by this report.

Areas showing the most growth from last year are the Clarksville MSA (11.5 percent), the Nashville MSA (9.9 percent), and the Jackson MSA (7.8 percent). Housing prices for the state are up 7.7 percent from last year, which is 1.1 percentage points higher than the nation’s yearly growth.

Other areas worth noting are the Johnson City MSA and the Kingsport-Bristol MSA, which have both reported much stronger growth than in the previous quarter. 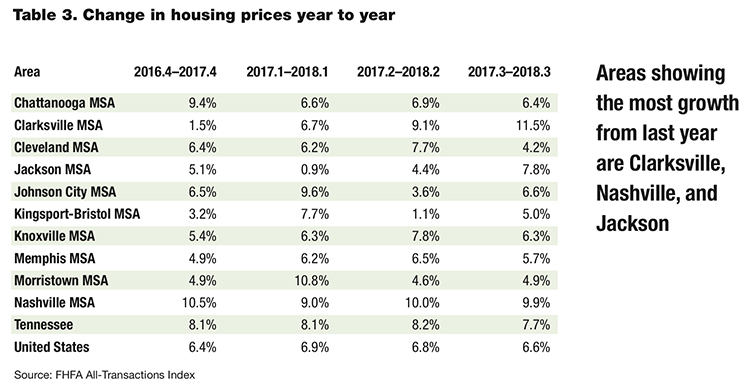 This chart shows year-over-year changes in housing prices for state MSAs, the state overall and the U.S. since the fourth quarter of 2017. (Courtesy of the MTSU Business and Economic Research Center)

Tennessee’s foreclosure rate was the lowest in at least 18 years, although mortgages past due are up compared to the second quarter.

BERC’s report is funded by Tennessee Housing Development Agency. The quarterly report offers an overview of the state’s economy as it relates to the housing market and includes data on employment, housing construction, rental vacancy rates, real estate transactions and mortgages, home sales and prices, delinquencies and foreclosures.

The Business and Economic Research Center operates under the Jennings A. Jones College of Business at MTSU. For more information, visit http://mtsu.edu/berc/.