In MTSU’s Exercise Science program, personal passion pays off in a major way

Exercise science is one of MTSU’s biggest programs, but you’d never know it from visiting the faculty offices in Alumni Memorial Gym. The exercise science professors work within shouting distance of one another—and that comes in handy.

“We all have our offices together, right around the lab,” says Dr. Jennifer Caputo. “I don’t even use the phone; we just kind of yell back and forth. And we have students around all the time. It’s a different environment in that regard.”

“I had a great relationship with every professor there. Everyone knew me and the path I was taking,” he says.

Matt Renfrow, who earned his PhD in exercise science in 2009, says his professors were mentors, more committed to building his career than their own.

“As such, they were there every step of the way to guide and support me,” he says, “even when I needed a good kick in the pants.”

For the exercise science faculty, that wholesale dedication to students is standard operating procedure, Caputo says.

“We all work with all our students, and all of our faculty work at all levels—undergraduate, master’s and doctorate,” she says. “We’re a very cohesive unit, and I think that helps our students, because they get input from all of us.”

Students do most of the research produced within the program. And because MTSU’s program has an applied focus, research opportunities abound. Guided by faculty, students at all levels can get hands-on experience in the exercise science lab with “some of the best equipment in the state,” notes Dr. John Coons, and in pilot health programs in the many schools and communities with which MTSU partners.

Terri Ellison, a graduate student, can vouch for the heavy research focus. “It seems like I’m either reading about a study or conducting one,” she says.

For Renfrow, that wealth of opportunity translated into a strong vita and, ultimately, an assistant professorship in the Midwest—plus extra income along the way.

Former doctoral student Jeremy Bettle says research skills he cultivated at MTSU helped him land a past job as head strength and conditioning director at the University of California at Santa Barbara.

“I’m probably not going to know everything about your sports and what to do with your athletes,” Bettle told UCSB coaches during his job interview, “but I certainly have the tools to find out.” 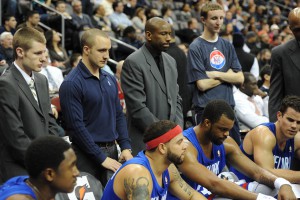 Bettle recently took a new position as strength and conditioning coach with the New Jersey Nets of the National Basketball Association.

Monica Tucker-Schwartz says that when she enrolled as a master’s student in exercise science, research intimidated her. But with faculty encouragement, she discovered she loved it, and now she plans to get her PhD.

“If you had asked me (earlier) if I would further my education with a doctorate, I would have said, ‘No way,’” she admits. “But now? Yes. All the way.”

Dr. Don Morgan says exercise science students become passionate about research when they watch it change lives—like Dr. Sandra Stevens, a one-time doctoral student who developed underwater training for people with spinal cord injuries. After substantial training, some of her test subjects walked for the first time in years.

Health and wellness are the new focus of exercise science, Morgan notes, so while some graduates still choose traditional fields like athletic or personal training, many now gravitate toward areas like cardiac rehabilitation, public health and physical therapy—a competitive field in which MTSU grads are particularly well-suited.

“It isn’t just that they get the experience here,” Morgan explains. “I think they are moved personally by what they see. To be involved in research that really makes a difference, that’s incredibly meaningful.”

After graduating in 2001, Cliche saw the difference he could make working one-on-one with cardiac patients at Vanderbilt. Now, as coordinator of health for Hamilton County schools, he’s making a difference on a much larger scale.

“I want to have an impact on larger groups, and on this next generation,” he says.

In exercise science, he says, what’s true at MTSU is also true outside the university walls: A few dedicated people can change many, many lives.