A Look into the MTSU Career Ce.. 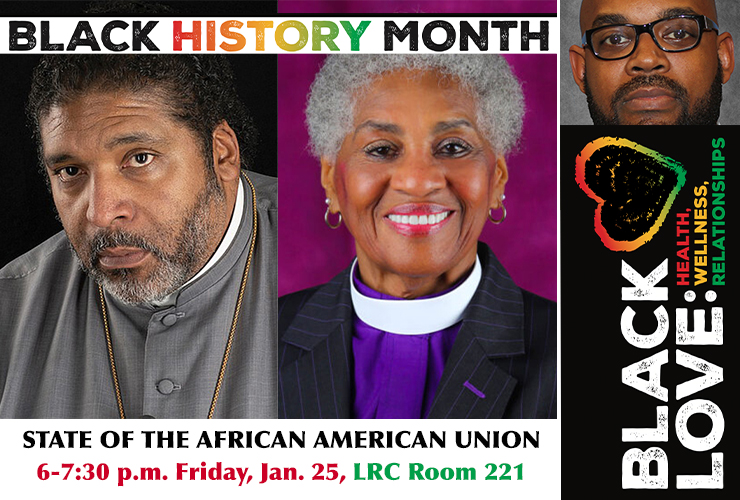 The role of the African American church in promoting wellness will be discussed at an MTSU Black History Month event this week with two prominent religious thought leaders shaping the conversation.

“The State of the African American Union” is now slated for 6 to 7:30 p.m. Friday, Feb. 25, in the McWherter Learning Resource Center, LRC Room 221. This event, in its third year, is free and open to the public and will also be livestreamed on the MTSU Facebook page and at mtsu.edu/live. (Editor’s note: This updates previous 7 to 8:30 p.m. event time and previous location of Tom Jackson Building to expand seating capacity.)

The panel will focus on the church’s role in Black wellness, including the church’s responsibility to address political concerns, engage in social action and to speak out against a variety of social issues. These include racism, classism, gentrification, sexism and gay rights.

“For Barber, he is the leader of the Poor People’s Campaign, a movement once led by the Rev. Dr. Martin Luther King Jr.,” Treadwell said. “Barber is very vocal in his claim that economic inequality is as much of a legal issue as it is theological.”

Barber is co-chair of the Poor People’s Campaign: A Nation Call for Moral Revival, a widespread grassroots campaign advocating for, among other things, “restoration of the full Voting Rights Act” and a $15 an hour federal minimum wage on behalf of the 140 million poor and low-wealth citizens in the country.

“As for Byfield, she has been instrumental in guiding America’s oldest African American connectional denominations and one of its largest denominations in a revival toward providing for social needs during worship/mission,” Treadwell said.

Helping moderate the panel will be three student representatives from MTSU’s National Pan-Hellenic Council, MTSU chapter of the NAACP and the Africana Studies Program.

For off-campus attendees, a campus map is available at http://bit.ly/MTSUParking.