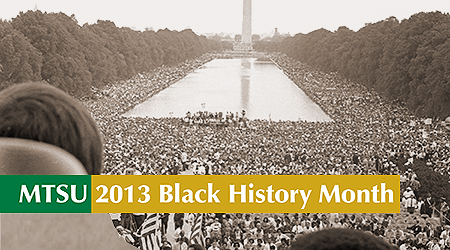 “At the Crossroads of Freedom and Equality: The Emancipation Proclamation and the March on Washington” is the theme of MTSU’s 2013 observance of Black History Month.

Click on the graphic above for a full-size, printable Black History Month 2013 events calendar.

This year marks the 150th anniversary of the signing of the Emancipation Proclamation, President Abraham Lincoln’s executive order proclaiming all blacks enslaved in the Confederate states to be free.

It also marks the 50th anniversary of the March on Washington for Jobs and Freedom spearheaded by the Rev. Dr. Martin Luther King Jr. It was at this march on the Washington, D.C., mall where King delivered his famous “I Have a Dream” speech.

This year’s events include a “campus sing” of “Lift Every Voice and Sing,” a poem written by James Weldon Johnson in 1899 and set to music in 1900 by his brother, John Rosamond Johnson.

The entire campus community is invited to lend their voices to the song nicknamed “The Black National Anthem” at 12:30 p.m. Friday, Feb. 1, at Peck Hall, on the Keathley University Center knoll and in the courtyard of the Student Union Building.

More events are listed below.

All events are free and open to the public unless otherwise stated.

For details on these and other Black History Month activities, contact Vincent Windrow, director of the Intercultural and Diversity Center and chair of the Black History Month Committee, at 615-898-5812 or vincent.windrow@mtsu.edu. You also can learn more from excerpts from Windrow’s Jan. 28 appearance on “MTSU On the Record,” the university’s weekly public affairs radio program on WMOT-FM 89.5, below.