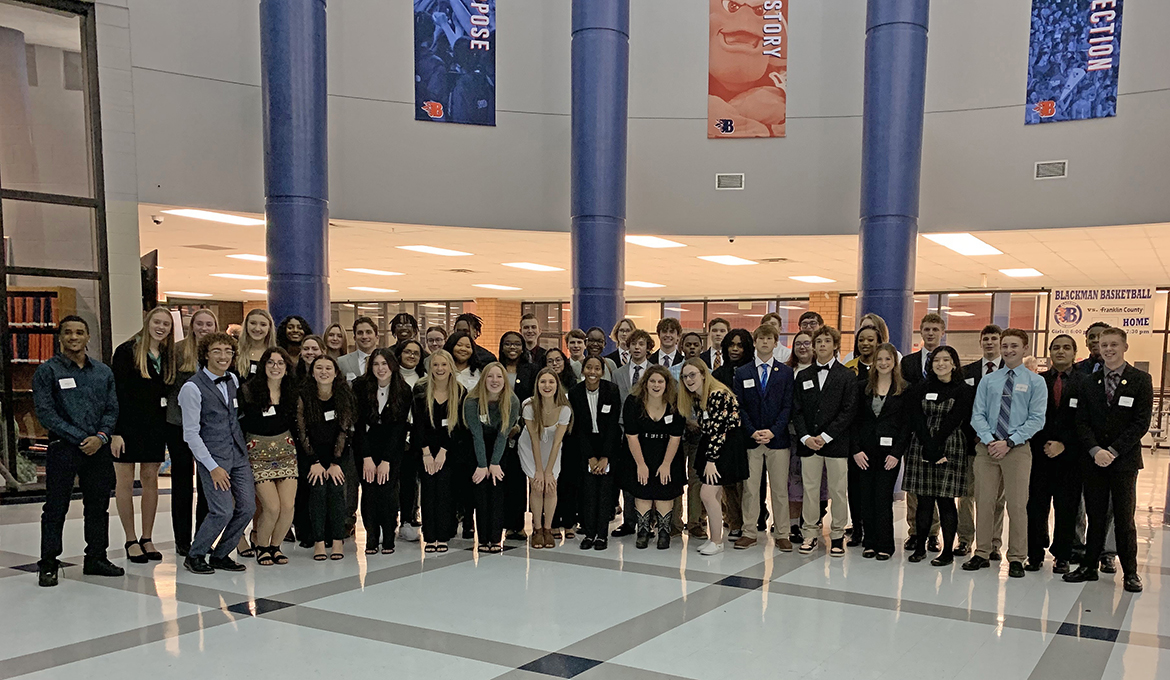 Zach Shafer wants to be a professional pilot one day. He is considering Middle Tennessee State University’s highly regarded Aerospace Department and two other southern aviation programs to help complete his dream.

“I am still considering other colleges, but MTSU is up at the top of the list,” said Shafer, a 4.0 GPA student with a 28 ACT score who visited with his parents, Dan and Christina Shafer. “We are just trying to figure out money right now for college. … I like the fact it’s close to home and the same airport I use to take off and land for my flight training.”

Launched in 2015 to attract high-achieving students, MTSU and Blackman have partnered with the collegiate academy as a way for students — many of whom will wind up at the university — to gain access to MTSU faculty and resources and grow academically through research and other means. BCA is open to qualifying students in grades 9 through 12.

Eligible juniors and seniors can take up to six hours of MTSU courses taught by university faculty at no cost, with credits counting on high school and college transcripts.

“You persevered and you did it,” he said. “The road, undoubtedly, was not easy. We hope you will be able to look back and see just how much you can do when you maximize your time, focus your attention and utilize all of the resources available to you.”

In all, 53 BCA students — all dressed for success — took part this fall in research. Forty-four indicated they had applied to MTSU — and 12 listed the university as their only choice.

Laurie Witherow, MTSU associate vice provost for Admissions and Enrollment Services, selected one of two winners of scholarships at the Dec. 7 symposium that will be presented to the recipients at Blackman’s awards day in spring 2023. The BCA Parent Association chose the other recipient.

“Attending the Capstone Symposium is always a highlight of my year,” Witherow said. “I love talking with each student about their research, interests and plans for college. I’m delighted that so many of these exceptional students are considering MTSU as part of their future.  I learned so much from this group of young researchers. They were a delight.”

Among the dozen of solid MTSU commitments was Ella Cox, 17, who plans to major in art history and minor in music. She applied and has been accepted. Her capstone project was “The Benefits of Art Therapy on Mental Health.”

“I’m grateful,” Cox said of completing the research that included a portfolio and other objectives. “I’m glad I did this. It was hard, but I persevered.”

The daughter of jazz musicians Kelli (teaches piano at Trevecca University) and Greg Cox, Ella Cox looks forward to studying art, knows the “music program is really good, MTSU is not too far from home and all the professors are nice.” Musically, she’s a percussionist.

Regarding his research, Shafer, 17, concluded that “pilot performance increases when emerging aviation technology is utilized. I took this a step further to research if technology would become so advanced that it could even replace humans as the pilot of a plane. While there are examples of unmanned aircraft today, it is going to be a bit longer before the entire aviation industry is fully automated.”

One day after the symposium, Shaver visited MTSU and its Aerospace Department on-campus and Flight Operations Center at Murfreesboro Airport for the first time.

“Minus the weather (rain), I had a great visit,” said Shafer, who hopes to obtain his pilot’s license in a few months. “We were touring with another family from Lexington (Kentucky). I found the (Diamond DA-40 and Piper Seminoles) aircraft, hangar and simulator room very appealing.”