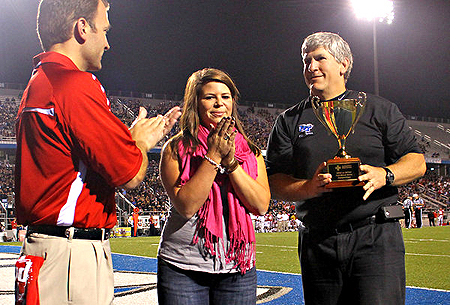 MTSU students, staff and supporters “bled blue” — to the tune of 589 units of blood — to save lives and beat Western Kentucky for the second year of a friendly off-the-gridiron competition.

The winner was announced during the Oct. 6 football game against WKU at Floyd Stadium. The three-day competition drew so many potential donors to MTSU’s Student Health, Wellness and Recreation Center that even with extra supplies on hand, blood-collection supplies ran out before the event concluded.

“It was an amazing turnout and a great opportunity to help,” said Brittany Durham, senior donor-recruitment representative for the American Red Cross’s Tennessee Valley Blood Donor Services Region. “We learned the hard way that MTSU donors will turn out in droves to support a blood drive, and we’ll plan accordingly for next year’s competition.

“I want to thank MTSU’s donors and volunteers for all their support. We’re grateful to everyone who came out, on both campuses!”

WKU collected 422 units of blood, reaching a combined total of 1,011 to almost meet the competition’s goal of 1,050 units. (Western won the football game, 36-33 in double overtime, before 23,307 fans at MTSU and a live national audience on ESPNU.) Since each donation can help up to three people, the universities’ combined efforts helped more than 3,033 hospital patients, Red Cross officials said.

Organizers praised campus groups and staff who worked hard to encourage potential donors and then volunteered during the drive, including student organizations, MTSU Campus Recreation, University Housing and Residential Life, the Department of Student Programming, the Office of Alumni Relations, the Athletic Department and the Student Government Association.

The donation drive also was ably assisted by the Dunn family of McMinnville, Tenn., whose youngest member, Andy, is a cancer survivor in part because of donated blood products. His older brother, Ray, is a freshman honors student at MTSU. The brothers and their parents, Dot and Daryl, spent much of the MTSU drive’s second day helping donors and volunteers on-site.

MTSU’s next blood drive is set Dec. 5-6 in Room 322 of the Keathley University Center from 10 a.m. to 4 p.m. daily. To make an appointment for that drive, visit www.redcrossblood.org later this month, click the blue “Enter Sponsor Code” box in the middle of the page and then enter “mtsu19” to register.