MTSU community ‘Bleeds Blue’ to help save another ...

MTSU community ‘Bleeds Blue’ to help save another 1,300+ lives, win back challenge trophy 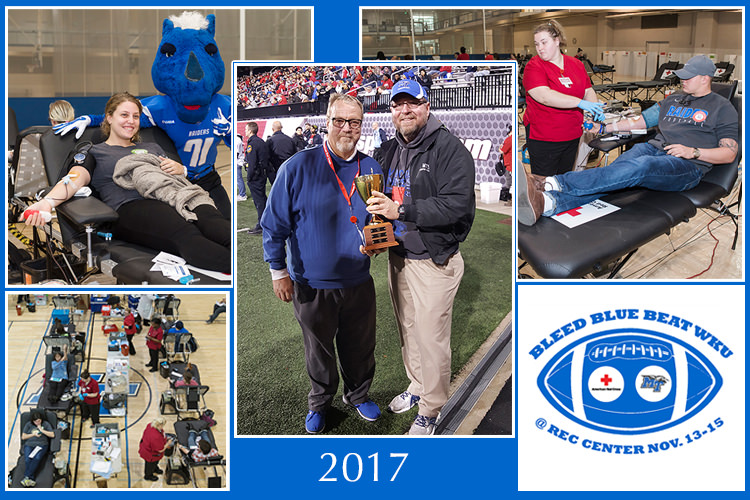 MTSU is celebrating another 1,300-plus lives to be saved — and winning a trophy for the fifth time, too — after donors stepped up to give more than 460 pints of blood during a three-day communitywide blood drive.

MTSU donors provided 461 pints of blood Nov. 13-15, while WKU donors gave 389 pints. Each donated pint of blood can save up to three lives, meaning the total 850 pints have the potential of saving 2,550 individuals.

MTSU supporters are now five-time champs in the “Bleed Blue, Beat WKU” challenge, collecting 7,690 total pints of blood with WKU since 2010. The seven-year competition now has helped, or will help, more than 23,070 people across Tennessee and parts of Kentucky, Illinois and Missouri.

Some MTSU students said they think the competition goes far beyond who takes home the trophy for most blood donated.

“My biggest takeaway would be that I made a difference for MTSU and the Rutherford County community,” said MTSU junior Grace Worley, a regular blood donor who gave at MTSU again this year.

“Even though donating my blood might not be a big deal for me, it could be an enormous deal for someone on the receiving end of my donation,” she said.

“There’s always a need for it,” Blissard said. “You never know what might happen, and other people will need it eventually. So donating blood is something we all need to do. We all need to participate just to fill the banks so there’s never a shortage.”

MTSU’s blood drive coordinator Ray Wiley said he believes that student, faculty and staff unity is a valuable factor in donating to an important cause like this.

“Let’s face it, we need opportunities to do things to help each other,” said Wiley, who’s also MTSU associate director of campus recreation.

“Universities need to take these opportunities when they can get them. It’s special and means something.

“Our committee wants to say thanks to everyone who gave, attempted to give or volunteered to work for making a positive difference by helping others in need and for helping us make this year’s drive a huge success!”

Thanks to the Red Cross “Rapid Pass” app, donors can now track their blood and see where their share of cells is headed by visiting www.redcrossblood.org/rapidpass.

“It’s a cool thing the Red Cross is doing,” said Wiley. “You can use Rapid Pass for so many things, and it’s way easier to set donor appointments,” Wiley said.

Those who were unable to donate during MTSU’s blood drive can visit www.redcrossblood.org anytime and type in their ZIP code to search for and make an appointment at a local drive or blood donation center.

MTSU alumni Shane Blissard and Danielle Boyd-Garrett will answer that question in a flash: to save lives.

They’re encouraging all Blue Raider students, staffers, graduates, neighbors and supporters to make an appointment at http://ow.ly/xu0h30gkXbo to donate Monday, Tuesday or Wednesday from 10 a.m. to 6 p.m. in the Campus Recreation Center.

MTSU junior Mari-Lynn Wilson of McMinnville, Tenn., gets support and a big thumbs-up from Lightning, the MTSU mascot, as she donates blood Monday, Nov. 13, during the 2017 “Bleed Blue, Beat WKU” blood drive in the Recreation Center. The exercise science major was one of dozens helping to save lives on the drive’s first day; it continues Tuesday and Wednesday, Nov. 14 and 15, from 10 a.m. to 6 p.m. each day. (MTSU photo by Andy Heidt)

MTSU donors will have free reserved parking at the Rec Center Nov. 13-15, and each will receive a T-shirt and two free tickets to MTSU’s last home football game of the season while supplies last.

Blissard, a Blue Raider football standout and concrete industry grad (B.S. ’12), was accidentally hurt in a spring training camp before his senior season. He initially tried to shrug it off, but a trainer knew something was wrong.

“Long story short was that I had ruptured my spleen and didn’t know it and lost a lot of blood internally,” Blissard says. “The Red Cross stepped in, and they saved my life by giving me blood transfusions.”

MTSU alumnus Shane Blissard, right, and his wife, Abby, are shown in this recent Facebook photo. Shane Blissard survived a deadly football injury in 2011 with the help of donated blood and is urging donors to roll up their sleeves Nov. 13-15 at MTSU. (Photo courtesy of Shane Blizzard)

“There’s always a need for it,” Biissard says. “You never know what might happen, and other people will need it eventually. So donating blood is something we all need to do. We all need to participate just to fill the banks so there’s never a shortage.”

Boyd-Garrett, a 2014 Bachelor of University Studies grad with a double major in Leisure, Sports and Tourism Studies and in organismal biology and ecology, has lived for nearly nine years with blood-clotting disorders.

She was a 17-year-old freshman at the University of Tennessee-Martin when she first needed someone else’s blood.

“I got really weak, and all of a sudden I couldn’t stop bleeding,” she recalls. “My friends and roommates rushed me to the emergency room, and I got a blood transfusion. The next spring it happened again.”

Boyd-Garrett finally got a diagnosis five years later: a gene mutation that requires her to take blood thinners to stay healthy and prohibits her from donating blood to help others. She volunteers at blood drives and encourages loved ones, co-workers, neighbors and friends to donate regularly to replenish blood supplies.

“The Red Cross means saving lives,” she says, “and ‘True Blue’ means we stand with each other and for each other. This university taught me that before I went here, and because of blood drives like the one here every year, I was saved. Blood means life.”

Donors who want to “Bleed Blue” Nov. 13-15 can also use the “American Red Cross Blood” app, available at http://ow.ly/S39Ke, to make an appointment. They can save even more time on donation day by completing the “Rapid Pass” online health questionnaire at www.redcrossblood.org/rapidpass just before their appointments.

Walk-in donors will be welcome at the MTSU drive, but those with appointments will be processed first and finish their donations faster.

Ray Wiley, assistant director of MTSU Campus Recreation, a longtime Red Cross volunteer and one of the “Bleed Blue” drive coordinators, has more information on the upcoming event in the video below.

MTSU supporters are four-time champs in the “Bleed Blue, Beat WKU” challenge, helping to collect more than 6,800 total pints of blood with WKU since 2010. Because each unit of blood can aid three different patients, the six-year competition has helped more than 20,500 people across Tennessee and parts of Kentucky, Illinois and Missouri.

For updates and more information about the blood drive, follow @MTSUNews on Twitter with the hashtags #BleedBlueMTSU and #BleedBlueBeatWKU. For directions to the Rec Center, visit www.mtsu.edu/camprec/directions.php.

MTSU supporters can save lives, save time and show their True Blue colors by making an appointment today to donate blood Nov. 13-15 in the seventh annual blood drive competition with Conference USA rival Western Kentucky University.

Click the football to make an appointment to donate blood at MTSU Nov. 13-15.

Donors can schedule an appointment from 10 a.m. to 6 p.m. each day inside MTSU’s Campus Recreation Center by visiting www.redcrossblood.org and typing in “MTSUChallenge” or using the “American Red Cross Blood” app, available at http://ow.ly/S39Ke.

Walk-in donors will be welcome, but those with appointments will be processed first and finish their donations faster.

On donation day, donors can save even more time by completing the “Rapid Pass” online health questionnaire at www.redcrossblood.org/rapidpass.

MTSU supporters are four-time champs in the “Bleed Blue, Beat WKU” challenge, helping to collect more than 6,800 total pints of blood with WKU since 2010.

Because each unit of blood can aid three different patients, the six-year competition has helped more than 20,500 people across Tennessee and parts of Kentucky, Illinois and Missouri.

“Giving life, that’s what it is all about,” says Diane Turnham, MTSU’s senior associate director of athletics and a longtime donor and organizer for the annual community blood drive.

“While it’s always great to compete against Western on the football field, it is also very rewarding to help others in our own community. Each donation can save up to three lives.”

The drive is open to all MTSU students, faculty, staff and alumni as well as all MTSU neighbors and supporters across Murfreesboro, Rutherford County and the Midstate.

Click on the American Red Cross button to get the new blood donation app.

He adds that donors can visit the Red Cross website for more suggestions.

MTSU donors will have free reserved parking at the Rec Center Nov. 13-15, and each will receive a T-shirt while supplies last. For directions to the Rec Center, visit www.mtsu.edu/camprec/directions.php.

For updates and more information about the blood drive, bookmark this page and follow @MTSUNews on Twitter with the hashtags #BleedBlueMTSU and #BleedBlueBeatWKU.

University blood-drive leaders pose with the annual “Blood Battle” challenge trophy on MTSU’s Jones Field during the announcement of the winner of the 2016 competition between MTSU and Western Kentucky University in this file photo. From left are Dr. Gloria Bonner, assistant to the president in MTSU’s Office of Community Engagement; Olivia Higgins, WKU athletics marketing assistant; Todd Stewart, WKU director of athletics; Chris Massaro, MTSU director of athletics; and Diane Turnham, MTSU senior associate athletic director. WKU won the competition for the second time since 2010 with 414 successful donors in 2016. The 2017 blood drive challenge is set Nov. 13-15 at MTSU, and the winner will be announced Friday, Nov. 17, at WKU’s Smith Stadium during this year’s game. (MTSU file photo by Andy Heidt)