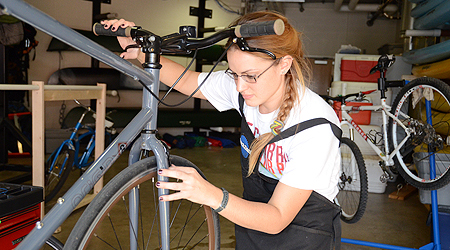 Natalee Lewis, an MTSU junior nutrition major from Murfreesboro, checks a brake pad on one of the Origin8 Cutler rental bicycles. She is a technician in the university’s new Bike Shop. (MTSU photos by News and Media Relations)

For $15 for the fall and spring semesters, MTSU students are getting a great on-campus deal for bicycle rental and repairs to help ease the pain of finding parking for their cars and trucks.

The new Blue Raider Bike Program, offered through the Campus Recreation Center, already is a huge hit with students. Faculty and staff can enjoy the benefits of the bike shop, too.

The program, implemented in late August at the start of the fall semester, encourages MTSU’s student population of 25,394 to ride bicycles instead of driving cars across — and around and around — campus.

Campus Rec has 15 Origin8 Cutler bicycles as well as mountain bikes available for rental from the bike shop. It’s open from 7:45 to 10 a.m. Monday, Wednesday and Friday and from 1 to 4 p.m. Tuesdays and Thursdays.

“The good of it,” Josh Stone, associate director of recreation programs, said of the 15 commuter bikes, “is they’re in high demand. The bad of it: They’re all gone.”

Stone was looking at a virtually empty bike rack on a recent morning. While checking the sign-out sheet, he said most of the 14 bikes were due back in by the end of the day. One bike, which needed repairs, was being held out of the rental fleet.

Junior Suzanne Sallaj of Murfreesboro is making use of the rental program.

“I use the rented bike for classes,” Sallaj said. “Since the campus is large and in-between time is condensed, a bike is the best transportation. Parking isn’t an issue, space of riding is available and the cost is nothing except for the per-semester $15 fee.”

“I think it’s terrific,” said Dr. Phil Oliver, an associate professor of philosophy who commutes via auto from his Nashville home.

“Along with the new dedicated bike/bus lanes, it makes our campus ‘greener’ and more navigable. It also models a form of transport we need to encourage in all our communities. This is one of the things we discuss in my environmental ethics course.”

“We expected it to be very slow and catch on eventually,” Stone said. “It was a snowball effect. All of a sudden, it became a blizzard.”

Word soon spread around campus about the one-speed bikes, which better accommodate MTSU’s flat campus and also have less upkeep and maintenance than two-wheelers with multiple gears.

“By the end of September, we were really busy, to the point where we were seeing empty racks where the bikes are supposed to be,” Stone said.

Oliver said he both rents from the bike shop and brings his own bicycle to campus.

“Having the option to rent will free me to ride on campus even on those days when I didn’t load the bike on the back of my car,” he said.

Oliver said he can use his bike to travel from his building, the James Union, “to the Rec Center, the Student Union Building, Walker Library and to class when it’s distant. Last semester, I had a hard time getting to classes in the (College of) Education Building on time, without a bike. This should solve that problem in the future.”

The $15-per-semester fee allows students an unlimited number of rentals and repairs “as long as it is normal wear and tear,” Stone said. The fee includes a helmet, lock and basket for carrying books or purchases.

Each rental is for 48 hours. When returned, after a 10-minute maintenance check, it can be renewed for another 48 hours based on availability.

Faculty and staff who own their own bikes can purchase a bike program card and their normal wear-and-tear repairs, such as flat tires and brake pads, will be covered.

Oliver said the shop performed a tune-up on his old Raleigh bike for $25 — half of his previous tune-up cost — and “they did a good job.”

Shelters that can accommodate 15 bicycles are expected to be built by the end of November in the Greenland Drive and Rutherford Boulevard parking lots. That will enable commuters to park near their cars and bike to their inner campus destinations.

Stone said they plan to pursue another grant next year that will double the number of bikes in the program.