In Memoriam and Baby Raiders

Blue Raiders 2013 Hall of Fame Class to be inducted Sept. 14 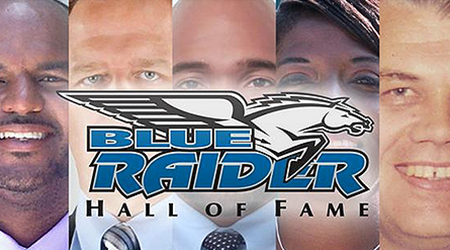 Two of the inductees, baseball’s Dewon Brazelton and football’s Dwone Hicks, are two of the youngest inductees. Both have just finished their careers in the past dozen years.

They are joined in this year’s Hall of Fame class by 1990s women’s basketball/volleyball standout Priscilla Robinson Murray, football’s Roger Carroll (1979-83) and 1950s two-sport star James “Doug” Shrader, who excelled on the baseball diamond as well as the basketball court.

Brazelton was MT’s highest Major League Baseball draftee when, in 2001, he was drafted third overall by the Tampa Bay Devil Rays. The Tullahoma High School alumnus earned that lofty status by being named to the elite Team USA national squad in 2000, as well as to five NCAA All-America first-team squads in 2001. He was also pegged the Sun Belt Conference’s athlete of the year in 2001.

At the end of his Blue Raider career, the talented right-hander owned both the single-season (154) and career (335) strikeout records for the school. His career complete games pitched, 22, and his career wins, 28, both rank second in school history, just one shy of each top spot. During Brazelton’s MTSU years, the Blue Raiders won an Ohio Valley Conference tournament championship and were regular-season co-champions of the Sun Belt Conference.

Inductee Hicks was a stalwart on the gridiron, ending his amazing career in 2002 as the all-time scoring leader for the famed Blue Raider football program. The four-year letterman amassed more than 4,300 all-purpose yards in his career, the second highest total in Blue Raider football history.

The Huntsville, Ala., native was named the Sun Belt Conference’s 2001 offensive player of the year and earned a place on the conference’s 30-year anniversary football team. Hicks was second nationally in scoring and 25th in rushing to cap a solid junior campaign.

Inductee Robinson is the 2013 torchbearer for the women’s basketball and volleyball programs and rightfully so.

Upon arriving on the Murfreesboro campus from Chattanooga, Robinson not only took charge of the basketball team but also was a leader in the Ohio Valley Conference from Day 1. She was the OVC freshman of the year in 1991, player of the year in 1992, a three-time all-tournament team member and a four-time all-conference selection as she led her Lady Raiders to an impressive 42-16 OVC record.

At the end of her basketball career, she ranked in the Top 5 in scoring, rebounding, field goal percentage, free throw percentage, field goals made, free throws made, games started and double-figure scoring games. She also took her athletic skills to the Blue Raider volleyball court, giving the team solid performances as a hitter/blocker and perfecting the art of the jump-serve.

Inductee Carroll, a native of Bradley, Fla., is a unique Hall of Famer in that he toiled in a position — football offensive guard — not linked to a bevy of personal statistics.

Carroll, who served as a team captain, was an integral cog in head coach Boots Donnelly’s successful rebuilding efforts from 1980 to 1983. He was honored by the American Football Coaches’ Association in 1983 as a first-team All-American. The All-OVC performer could do it all, from stopping defensive rushers head-on or running ahead of ball carriers to clear out the opposition.

Inductee Shrader is also a two-sport honoree, excelling in baseball and basketball for the Blue Raiders in the 1950s.

In 1955, he was selected to the All-Ohio Valley Conference teams in baseball and basketball and earned an All-American honorable mention on the hardwood. In his senior year, 1956, the Flintville, Tenn., native was the Blue Raiders’ basketball MVP, the baseball team’s player of the year, the Volunteer State Athletic Conference’s basketball player of the year and joined the Blue Raiders’ 1,000-point Club in basketball, in addition to again being named All-OVC in baseball.

The 2013 Blue Raider Hall of Fame induction ceremony will take place on the lawn of MT’s Rose and Emmett Kennon Sports Hall of Fame on Saturday, Sept. 14, before the Blue Raiders’ home football game against the Memphis Tigers.