New doctorate in education to .. 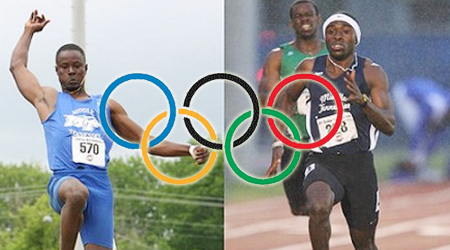 Middle Tennessee’s track and field program will be well-represented at the 2012 Summer Olympics in London: Two student-athletes will be participating in the games, and a part-time assistant coach also will be on hand.

MTSU’s Stanley Gbagbeke, shown at left, and Noah Akwu will be participating in the 2012 Summer Olympics in London. (photos courtesy MT Athletics)

Rising senior Noah Akwu will compete for his home country of Nigeria in the 200-meters event. Former Blue Raider Stanley Gbagbeke, a 2010 MTSU graduate, will join Akwu on the Nigerian team to participate in the long jump for his native country.

Part-time assistant coach Dr. Andrew Owusu,who also is a former Olympian, will be in London to help mentor the Ghanian squad.

Owusu has been associated with MTSU track since 1999 and participated in three Olympics: the 1996 games in Atlanta, Ga., the 2000 games in Sydney, Australia, and the 2004 games in Athens, Greece, for his home country of Ghana.

He is an assistant professor in the university’s Department of Health and Human Performance and specializes in health education and promotion.

Akwu and Gbagbeke become the 16th and 17th Olympians in Blue Raider track and field history, and the first since Owusu and three of his teammates participated in 2004.

“The biggest thing is that I always felt whenever there was a chance for any of our student-athletes to compete in the Olympics, world championships or any type of international competition, they should fully enjoy it,” said MT head coach Dean Hayes, who also is a former Olympic coach and referee. “They should be proud to represent their country, and especially if they are successful in it.

“Because of me having been an Olympic coach and having done all these international events for the United States, it was always great to represent the USA. I am always happy to have student-athletes from other countries that can represent their countries as well. It makes for a great experience, because they get to see and meet athletes from other countries and cultures. An experience like that you cannot measure, especially if they do it on a regular basis.”

Akwu’s most recent season saw him win the Sun Belt Conference 200-meters outdoor title with a time of 20.74 seconds, just three one-hundredths of a second off his personal-best time set at the NCAA Regional.

Akwu became the 85th All-American in MTSU’s history after placing sixth in the NCAA Championships at the conclusion of the 2010-11 indoor campaign. He was selected as the Sun Belt Trackman of the Year in 2011 after taking first place in both the 200 and 400 at the league meet.

During Gbagbeke’s final season with the Blue Raiders, he finished as the national runner-up in the long jump after capturing first place at the conference meet and at the prestigious Penn Relays.

His first All-American accolade came after the 2009 outdoor season, in which he also placed second at the NCAA Championships with a career-best mark of 26 feet, 3 inches (8.0 meters).

You can follow the Blue Raiders on Twitter at @MTAthletics for updates, or bookmark goblueraiders.com for more in-depth coverage.