In the News: MTSU experts comm..

MTSU students celebrate the return of the Blue Zoo...

‘MTSU On the Record’ guest lea..

MTSU students celebrate the return of the Blue Zoo [+VIDEO]

The scene at the event, with students holding aloft the banner — when the football team scores in Floyd or the basketball teams make a spectacular play in Murphy Center — is what Zoo President Kobe Hermann wants to see returned to home games. 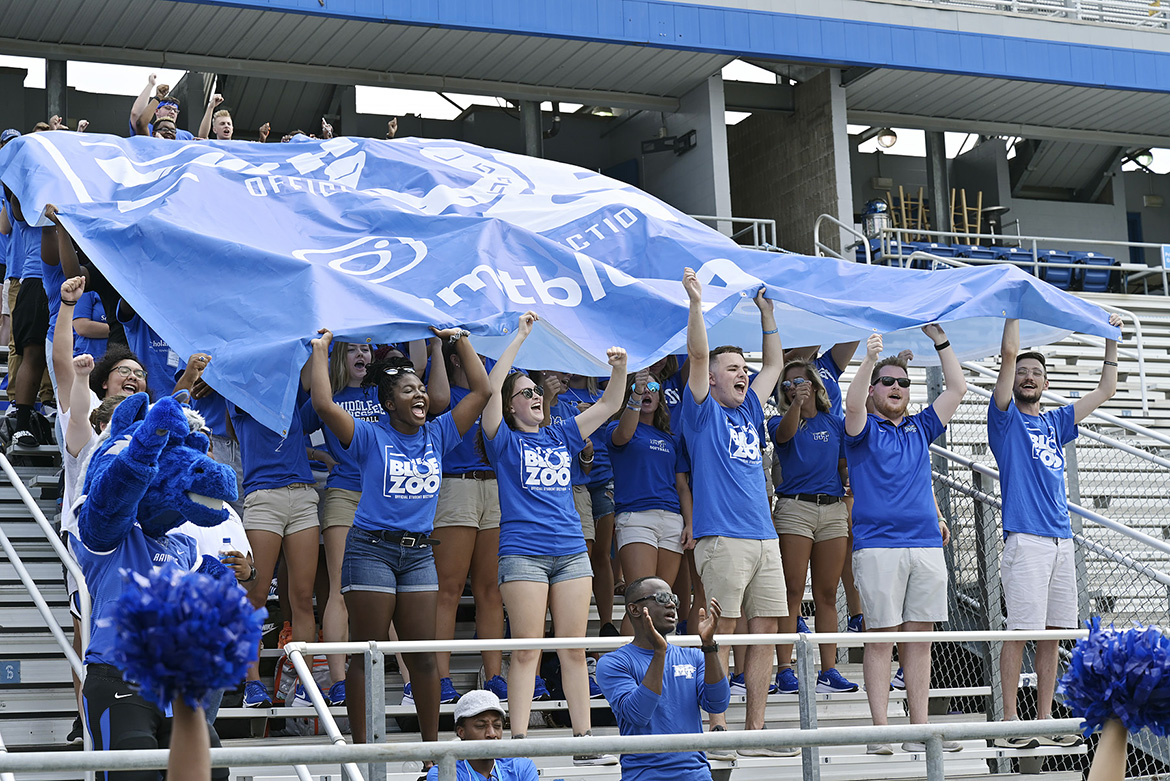 Officers and founders of the Blue Zoo, the newly revived student pep group at MTSU, stand in the first row of more than 300 students holding aloft the organization’s banner for the first time at an event Tuesday, Aug. 13, at Floyd Stadium. (MTSU photo by Andy Heidt)

It was MTSU’s now-legendary 2016 March Madness upset win over No. 2 seed Michigan State in the NCAA Tournament that helped Hermann confirm his decision to enroll on the Murfreesboro campus.

But it was the Blue Zoo, the loud and proud student section he found at Floyd Stadium and Murphy Center his freshman year, that made him a Blue Raider fan.

“The Zoo back then felt like the rowdy soccer sections you would see in games across Europe,” he said. “They created a great environment for all.”

But with the graduation of its co-founders, Brian Taylor and Aaron Grisham, the Zoo began to lose its mojo. Its once-active Twitter account cooled.

The huge banner once raised aloft by the Zoo when the Raiders scored vanished. The Zoo was becoming just a memory as its diehard supporters began to leave campus.

“I noticed last year that the Twitter account really wasn’t posting and the brand wasn’t as visible as it had originally been,” Hermann said. “Brian and Aaron had graduated, and the operation of the group was in limbo.”

Now a management senior in the Jones College of Business, Hermann decided to bring his passion for sports and interest in management into play by reviving the Blue Zoo.

A former student government senator, he pulled together a core of student leaders over the summer to revive the Zoo. And thanks to a strategy of targeting incoming freshmen and transfers in its first wave of memberships, the group is poised to become the largest registered student organization on campus. 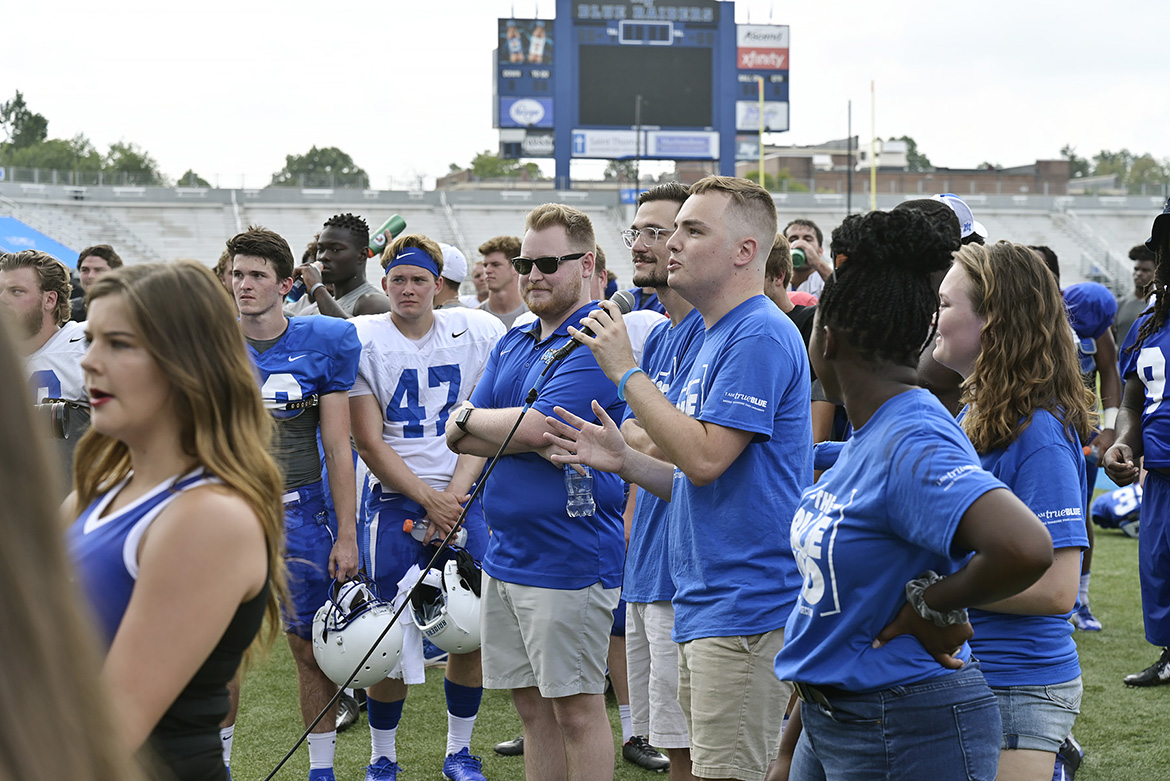 Kobe Hermann, president of the Blue Zoo, the newly revived student pep group at MTSU, speaks to the more than 300 students assembled Tuesday, Aug. 13, at Floyd Stadium to unfurl the organization’s banner for the first time. (MTSU Photo by Andy Heidt)

“The limbo status after the graduation of leadership is what sparked my interest in relaunching,” Hermann said. “I knew that registering the Blue Zoo as a student organization would provide it the structure it needs to go from year to year.

“So we wrote a constitution, named an outstanding faculty adviser — sports marketing guru Don Roy — and made an effort to target as much of campus as possible.”

Since the relaunch in May, Hermann and his team have targeted freshmen at CUSTOMS orientation sessions, registering more than 1,000 from the incoming class. “We plan to make an effort to connect with other student organizations and clubs to involve as many students as we can,” he added.

Treasurer Emily Oppmann, a junior and former senator, said that while the Zoo wants to attract all students to games, she believes incoming freshmen are the key to the Blue Zoo’s revival.

“If we can engage the class of 2023, encourage them to come to games and keep coming, we will have a solid start to the Blue Zoo,” she said. “From there, it will just keep growing.”

Athletics Director Chris Massaro said the new Zoo is “off to a great start, and we couldn’t be more pleased that it is tracking to be the largest student organization on campus.”

MT Athletics “will do anything and everything we can to support this endeavor while respecting the independence of this chartered student organization,” Massaro said.

Vice President Nate Parris, a junior and this year’s student Homecoming director, said he hopes the new Zoo will amplify the spirit of the Band of Blue and basketball pep band — and make games more compelling to students.

“I hope that we will be able to work together with the Band of Blue to celebrate their talents and hard work and add to the excitement to the student section that they bring,” said Parris, who is a former band member.

Secretary Micaela Griffin, a senior and also a former senator, wants to bring her communications experience as a student in the College of Media and Entertainment to help promote and market the new Zoo.

“Over the next few years, I hope the Blue Zoo grows to become a vibrant student section again that is always there to support our teams,” she said. “Helping fill the stands is my way of pitching in.”

Membership in the Blue Zoo is free — all students have to do is sit in the student section at Blue Raider games. Those wishing to be more involved and informed about the Zoo are encouraged to register as a member by going to https://mtsu.campuslabs.com/engage/organization/bluezoo. 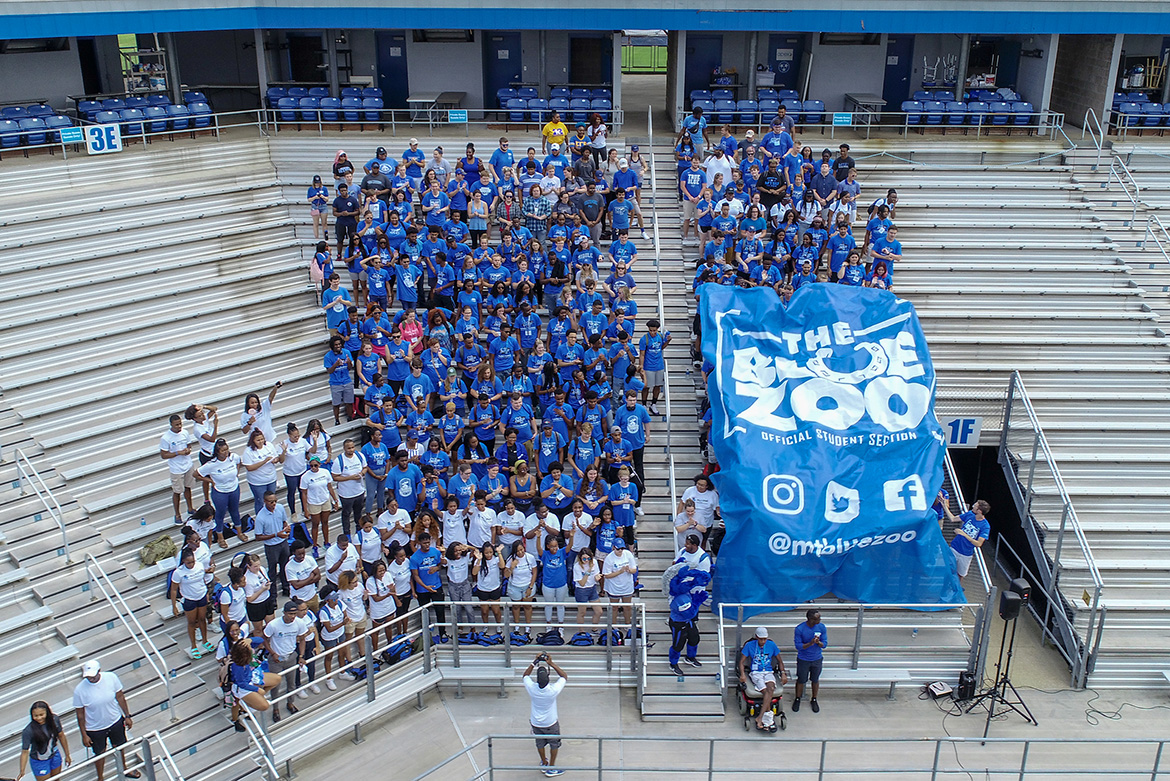 The huge banner for the Blue Zoo, the newly revived student pep group at MTSU, was unfurled for the first time Tuesday, Aug. 13, at an event at Floyd Stadium. (MTSU photo by Nathan Wallach)