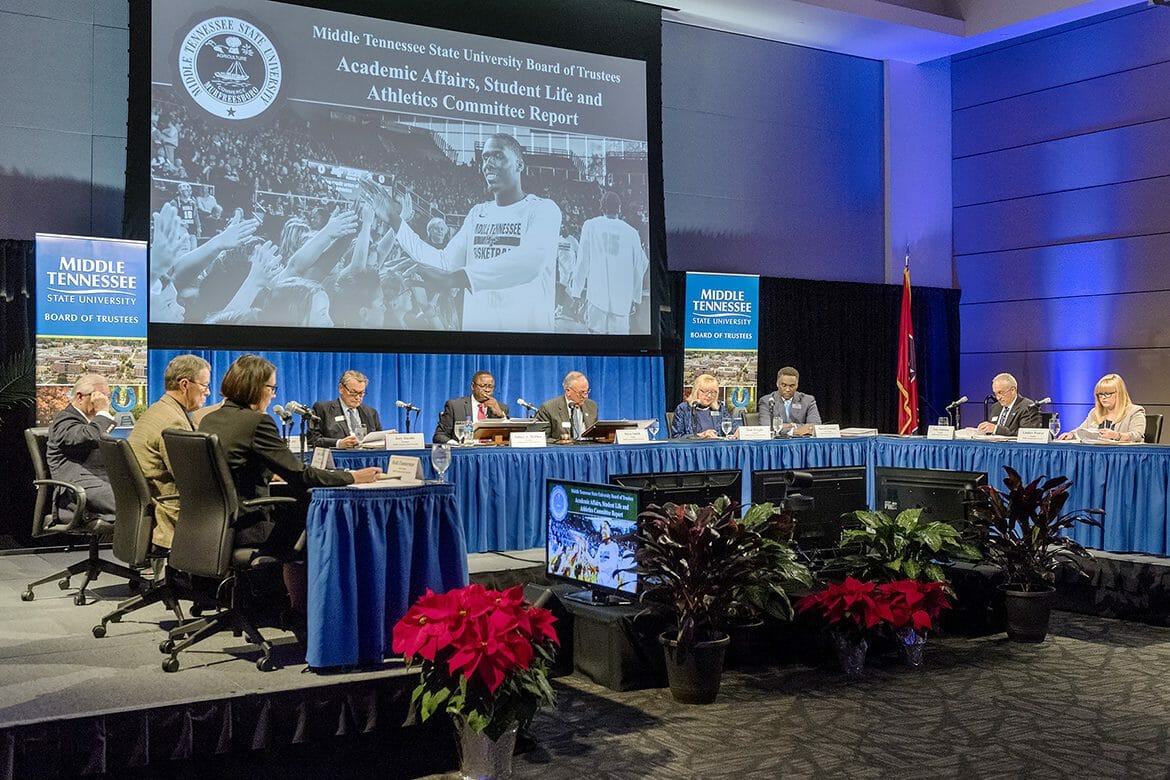 Trustees also approved reports of various committees, which included news that MTSU’s requests for state funding of two new campus buildings are No. 1 and No. 7 on the priority list of the Tennessee Higher Education Commission, or THEC.

The board approved a recommendation from the Academic Affairs, Student Life, and Athletics Committee to elevate the existing concentration in Insurance within the bachelor of business administration in fFinance degree to a free-standing degree in risk management and insurance, effective fall 2018.

MTSU President Sidney A. McPhee makes a point during the Dec. 5 Board of Trustees meeting in the Student Union Ballroom. At right is board chairman Steve Smith. (MTSU photo by J. Intintoli)

In other actions, the board:

McPhee, in his report to the trustees, thanked campus and area law enforcement, County Mayor Ernest Burgess and Murfreesboro Mayor Shane McFarland, as well as Rutherford County Sheriff Mike Fitzhugh and Murfreesboro Police Chief Michael Bowen, for their leadership in preparing for the planned October downtown protest rally that failed to materialize.

The president also said the Southern Association of Colleges and Schools Commission on Colleges Board reaffirmed MTSU’s accreditation after reviewing its change of governance from the Tennessee Board of Regents to the new Board of Trustees. For more information about the MTSU Board of Trustees, go to www.mtsu.edu/boardoftrustees.

Former longtime MTSU executive Patti Miller is all smiles after receiving special recognition at the Dec. 5 MTSU Board of Trustees meeting in the Student Union Ballroom. The board passed a resolution honoring Miller for her more than 25 years of service as MTSU’s assistant vice president for campus planning and architect. Miller joined the Tennessee Higher Education Commission this week in a systemwide facilities planning role. (MTSU photo by J. Intintoli)

The Middle Tennessee State University Board of Trustees announces the following committee meeting and full board meeting for Tuesday, Dec. 5:

• Board of Trustees: 1 p.m., Ballrooms A and B, Second Floor, Student Union Building. Agenda items include reports from board committees; approval of items including proposed rules and policies, president’s compensation, severance of procurement services from the Tennessee Board of Regents, 2017-2018 October revised budget, compensation strategies, award of expedited tenure, new academic program, and admissions application question; and information including the president’s report and, technical revisions made to policies and rules.