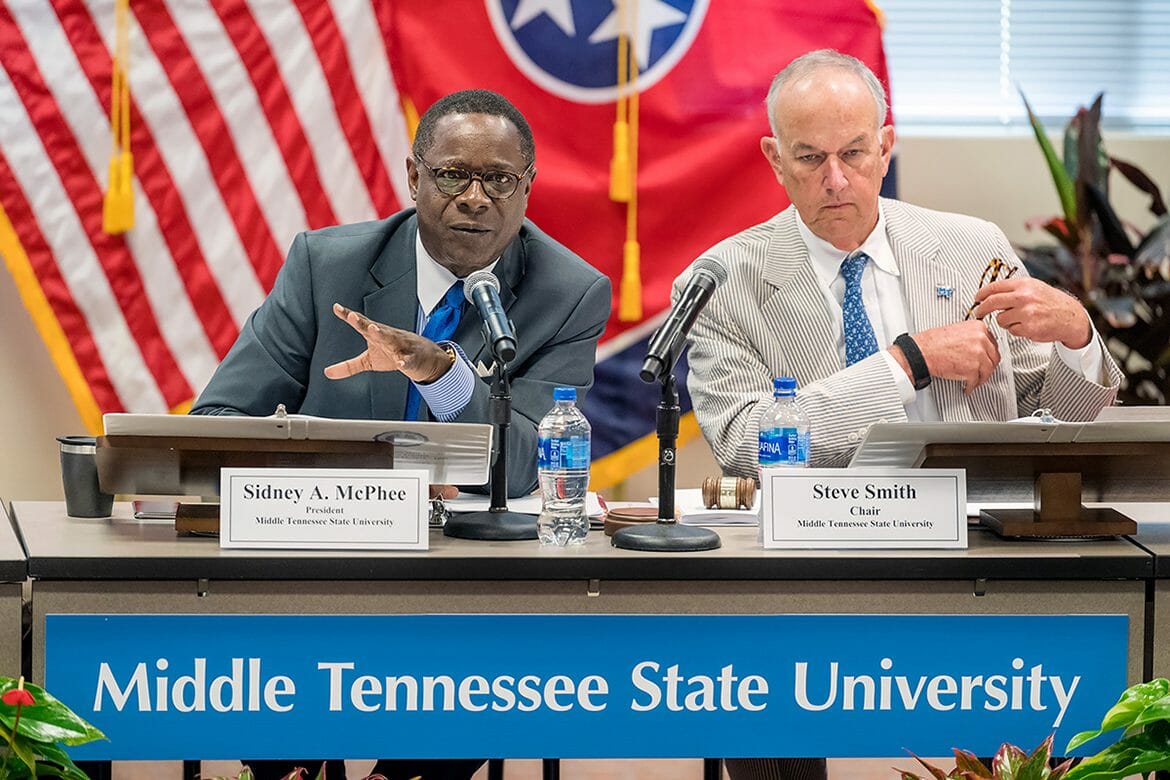 MURFREESBORO, Tenn. — Germany-based Siemens, one of Middle Tennessee State University’s partners in its mechatronics program, has given the institution software with a commercial value of $278 million to teach state-of-the-art computer-aided design.

President Sidney A. McPhee announced the donation, the largest in-kind gift in the university’s history, Tuesday, June 12, at the quarterly meeting of the MTSU Board of Trustees.

Trustees also approved tuition and fee rates for the coming academic year, a 1.5 percent pay increase for employees and a plan to adjust salaries based on market, and plans to seek a building for the School of Concrete and Construction Management. A new student trustee was also welcomed.

The Siemens Product Lifestyle Management Software grant will give MTSU access to the same technology that companies use to develop and manufacture robotic systems in a wide range of industries, including automotive, aerospace, machinery and high-tech electronics.

“This is one of the largest in-kind gifts that Siemens has awarded, and we are the only university in Tennessee to have access to such technology,” McPhee told trustees. “Students in our engineering technology and mechatronics programs will have the most advanced software for computer-aided design, modeling and systems simulation.”

Siemens, one of the world’s largest producers of energy-efficient, resource-saving technologies, is a leading supplier of efficient power generation and power transmission solutions and a pioneer in infrastructure solutions as well as automation, drive and software solutions for industry.

Dr. Walter Boles, chair of MTSU’s Department of Engineering Technology, told trustees that access to this software will help MTSU students be more competitive in the job market, since graduates with Siemens PLM software skills are highly valued by companies looking to fill advanced technology roles.

More than half of the top 1,000 manufacturing companies cited by Industry Week magazine use Siemens PLM software and, in the automotive, aerospace, machinery and high-tech sectors, the total is close to 80 percent.

NASA used the software to design Curiosity, the Mars rover; Calloway uses it to design golf clubs; and Space X used it to develop its Falcon rocket and Dragon space capsule.

Along with Boles, McPhee singled out two MTSU alumni, Judith Bevels, a senior service account executive at Siemens Building Technologies USA, and state Sen. Bill Ketron of Murfreesboro, for their work in helping the university obtain the gift.

The president also recognized Jimmy Davis of the Davis Groupe, a source for equipment used in all aspects of manufacturing, and Keith Hamilton, a retired training executive with Bridgestone Americas.

“The manufacturing climate in Tennessee, coupled with the need for highly skilled employees, is a huge factor, as Siemens is highly committed to educating a global workforce in digitalization and recognizes the incredible need in this area,” Bevels said.

Bevels said the gift also acknowledges efforts put into motion by the state of Tennessee for workforce education, including “Gov. (Bill) Haslam’s passion about these programs.”

The gift also supports and recognizes MTSU’s status as “the only Siemens Level 3 Certification Program in the U.S.,” she said, noting that the company was one of the stakeholders in the creation of the university’s mechatronics degree program.

Boles said the program, which accepted its first students in 2013, originally projected an enrollment of 50 by 2018 and now boasts 330 students. It is MTSU’s fastest-growing undergraduate degree program.

One of MTSU’s trustees, Chris Karbowiak, executive vice president of Bridgestone Americas, said the gift will be transformational.

“Our company is a beneficiary of the mechatronics program,” she said. “The work being done here is so tremendous and so influential.”

McPhee said the College of Basic and Applied Sciences will host Siemens officials this fall for a ceremony and demonstration of the software’s capabilities.

During the June 12 meeting, trustees also approved a 2.88 percent increase in tuition and fees for students beginning in the fall 2018 semester. The increase is within the range set by the Tennessee Higher Education Commission and next goes to THEC for final review.

MTSU’s full-time undergraduate tuition and fees of $9,206 for the Fall 2018 and Spring 2019 semesters will remain the lowest of the state’s three largest universities. The University of Tennessee-Knoxville charged $12,970 last year and has yet to set tuition and fees, while the University of Memphis will charge $9,701 in the coming year.

Judith Bevels, a senior service account executive at Siemens Building Technologies USA in Nashville, makes a point Tuesday, June 12, after the announcement of her company’s $278 million software donation to MTSU’s mechatronics program during the university’s summer 2018 Board of Trustees meeting in the Miller Education Center. (MTSU photo by J. Intintoli)

In other business, trustees:

• Approved a cost-of-living allowance of 1.5 percent, or $500, whichever is greater, for all full- and part-time employees as of June 30. The board also approved a compensation plan and provided money for market adjustments and related benefits based on the plan.

• Endorsed a plan to seek state funding for construction of a building for the School of Concrete and Construction Management. Private industry has raised or pledged money toward the project, McPhee said, noting the school’s strong ties to the workforce.

• Learned of plans to create two new academic programs, a bachelor of arts and master of arts degrees in art therapy, in the College of Liberal Arts

• Learned that freshman applications have exceeded 10,000 for the fall 2018 semester. It’s the first time that number has topped 10,000 since 2011. Also, registration at the university’s new-student orientation sessions this summer is up 10 percent for freshmen and 3 percent for transfer students.

• Learned that former MTSU President Sam Ingram, who led the university from 1979 to 1990, has decided to retire from his role as president emeritus effective June 30. Ingram has been in the emeritus role, serving as an adviser to the president, since he stepped down from the university’s top position.

• Welcomed Peyton Tracy, who graduated in May with his bachelor’s degree and will pursue an MBA degree this fall from the Jones College of Business, as the new student trustee, replacing Lindsey Weaver. Tracy, a former Student Government Association senator, was among three names presented by the SGA for McPhee’s consideration for the board. Weaver, a former SGA president who received her master’s degree from MTSU in May, is now assistant director of student leadership and engagement at Union University in Jackson, Tennessee.

MTSU President Sidney A. McPhee, left, explains the significance of Siemens Industry’s $278 million software donation to the university’s fast-growing mechatronics program Tuesday, June 12, during the university’s summer 2018 Board of Trustees meeting as board chairman Steve Smith listens in the Miller Education Center. The donation is the largest in-kind gift in the university’s history. (MTSU photo by J. Intintoli)

Members of MTSU’s Board of Trustees listen carefully as university President Sidney A. McPhee, seated at the left of the U.S. flag, explains significance of Siemens Industry’s $278 million software donation to the university’s fast-growing mechatronics program Tuesday, June 12, at the summer 2018 trustees meeting in the Miller Education Center. The group also approved tuition and fee rates for the coming academic year, a 1.5 percent pay increase for employees and a plan to adjust salaries based on market, and plans to seek a building for the School of Concrete and Construction Management, and welcomed a new student trustee. (MTSU photo by J. Intintoli)