MTSU on WGNS: WWII exhibit, on..

McPhee to Board of Trustees: MTSU top choice of Te...

McPhee to Board of Trustees: MTSU top choice of Tennessee Promise transfers

Middle Tennessee State University is the No. 1 choice of Tennessee Promise students who have transferred from one of the state’s community colleges to a four-year institution.

MTSU President Sidney A. McPhee made the announcement at the Tuesday, June 18, Board of Trustees meeting held inside the Miller Education Center on Bell Street.

McPhee shared with trustees recent data from the Tennessee Higher Education Commission that showed MTSU in the top spot for Tennessee Promise students seeking to earn a four-year degree. 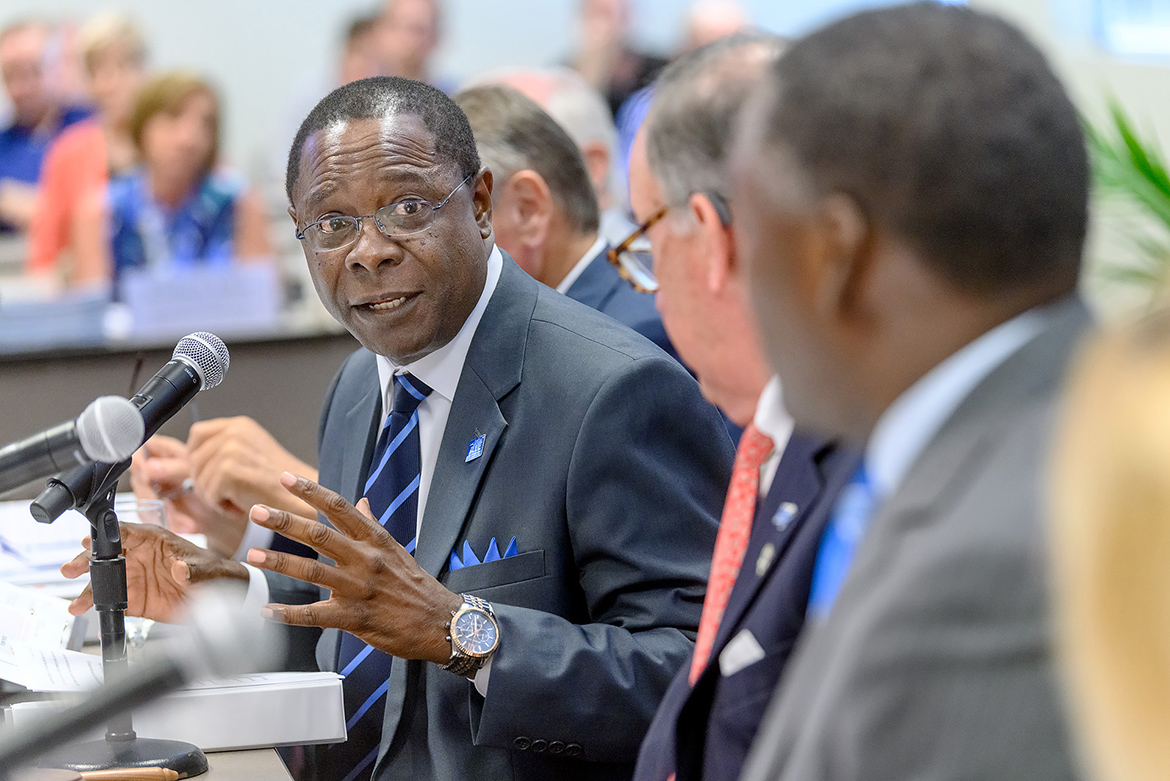 MTSU President Sidney A. McPhee, left, reports at the Board of Trustees meeting Tuesday, June 18, that MTSU i the top choice for Tennessee Promise graduates from community colleges who want to continue their educations at a four-year university. (MTSU photo by J. Intintoli)

“More Tennessee Promise students have transferred to MTSU than any other state university,” McPhee said. “This is consistent with our standing as the No. 1 choice for transfer students overall.”

The data shows MTSU received 21.5 percent, or 542, of the 2,528 students who took advantage of the free community college tuition through the Tennessee Promise program to seek an associate degree.

MTSU’s partnership with Motlow State Community College was also the most productive relationship between a two-year college and a four-year institution, McPhee said.

Motlow sent MTSU 255 of its students, THEC’s 2019 report on the Tennessee Promise shows. 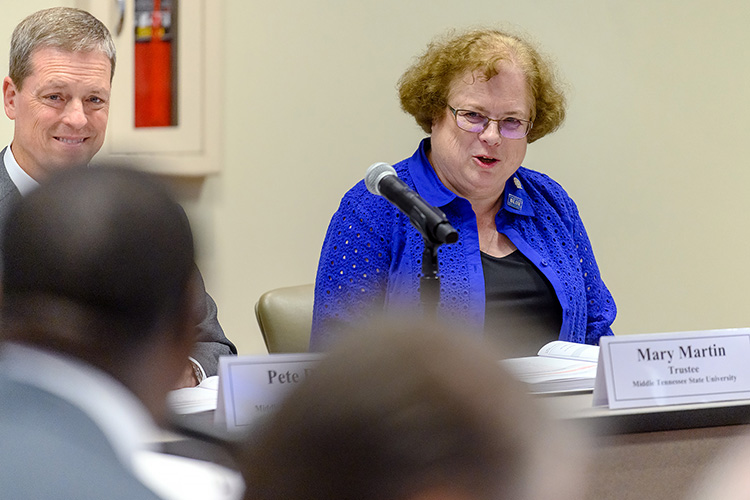 MTSU math professor Mary Martin, right, attends her first meeting of the MTSU Board of Trustees on Tuesday, June 18, at the Miller Education Center. Martin began her two-year tenure on the board as faculty trustee. (MTSU photo by J. Intintoli)

In other business, trustees approved a slight increase in tuition and fees this fall.

Joey Jacobs, chair of the Finance and Personnel Committee, said trustees “have given careful consideration to the impact that any increase will have on student affordability.”

He also said the committee “reviewed the tuition rates of other Tennessee public institutions, as well as peer institutions and found that even with the proposed fee increase, MTSU ranked as very affordable in comparison.”

In other business, trustees approved a new academic program, the Bachelor of Science in Public Writing and Rhetoric, a four-year interdisciplinary degree housed in the College of Liberal Arts.

Pam Wright, chair of the Academic Affairs, Student Life and Athletics Committee, said the degree will be the first of its kind in the region.

“Similar to degrees offered at many institutions, the degree will provide students with in-depth training in writing and rhetorical studies,” she said.

Wright said the degree will prepare students “for a range of writing-focused careers that involve analysis, creation, and editing of texts as well as for graduate study.

Trustees also learned about the creation of the Free Speech Center, a First Amendment advocacy hub that will be led by Ken Paulson, who is stepping down as dean of MTSU’s College of Media and Entertainment this summer.

“The center’s primary mission is one of public service, educating students and the public about the value of the First Amendment to a free society,” Wright said.

The center will be integrated into campus life and academics, fulfilling the university’s stated mission to educate students so that they “understand the proper role of free expression and civic engagement in our society,” she said.

For agenda details, to view the meetings livestreamed or for other information, go to www.mtsu.edu/boardoftrustees. 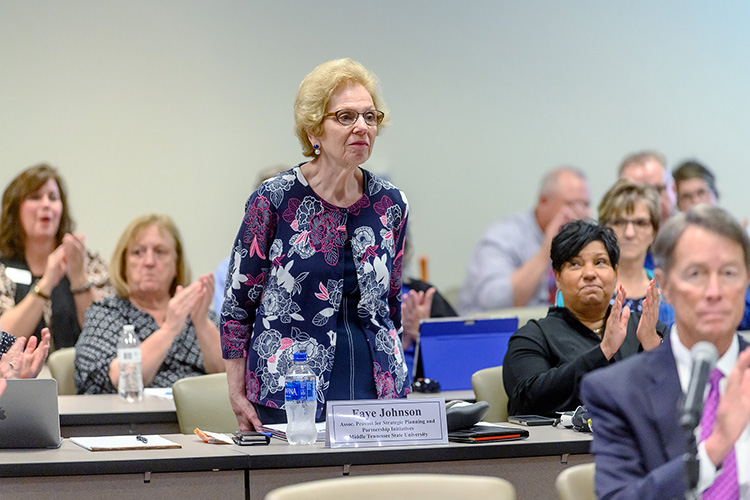 Attendees at the MTSU Board of Trustees’ Tuesday, June 18, meeting applaud longtime university employee Faye Johnson, associate provost for strategic planning and partnership initiatives, as she stands to be recognized. Johnson is retiring after 50 years of service on the Blue Raider campus. (MTSU photo by J. Intintoli) 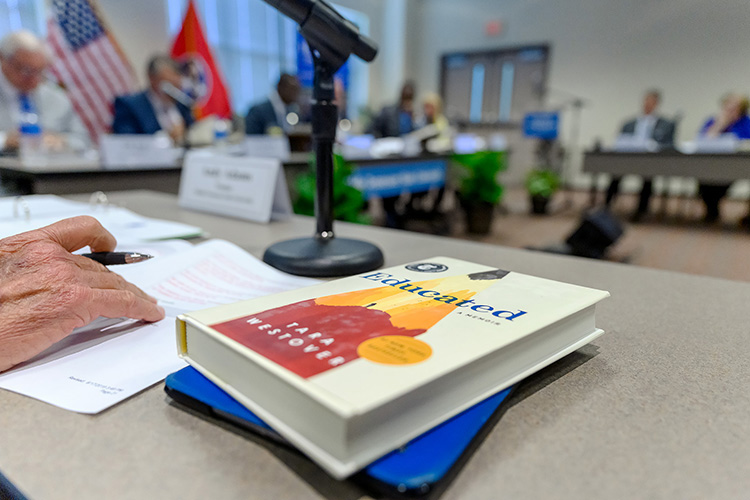 Members of the MTSU Board of Trustees received dopies of author Tara Westover’s book “Educated”, shown here, at their Tuesday, June 18, meeting at the Miller Education Center. MTSU President Sidney A. McPhee invited trustees to read the book along with incoming freshmen as part of the traditional Summer Reading Program. (MTSU photo by J. Intintoli) 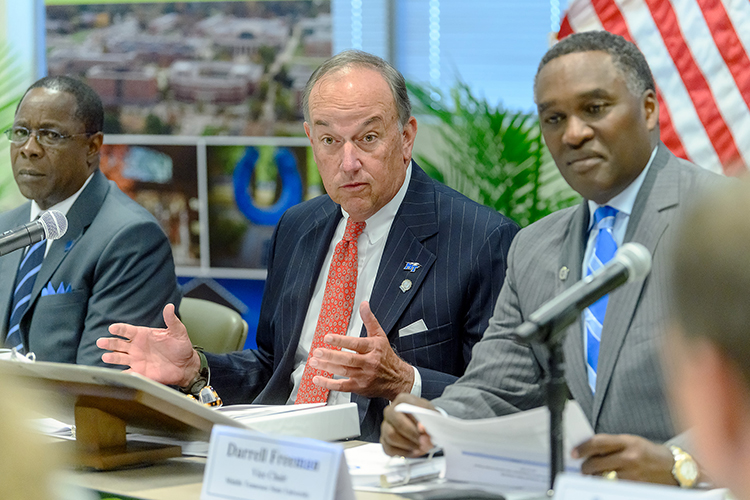 MTSU Board of Trustees Chairman Stephen Smith, center, makes a point Tuesday, June 18, during the board’s quarterly meeting inside the Miller Education Center on Bell Street. Seated next to him are MTSU President Sidney A. McPhee, left, and board Vice Chairman Darrell Freeman Sr. (MTSU photo by J. Intintoli)