MTSU Board of Trustees OKs extension of McPhee’s c...

McPhee has led MTSU through an extended period of academic progress and more than $1 billion in capital investment during his two decades at the helm while developing world-class programs that attract students from across the country and around the globe. 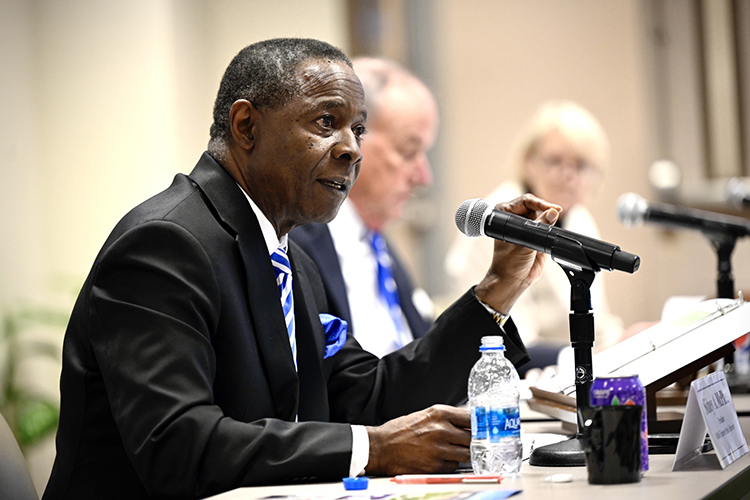 MTSU President Sidney A. McPhee makes a point during the Tuesday, April 5, Board of Trustees quarterly meeting inside the Miller Education Center on Bell Street. The board approved a contract extension for McPhee through December 2026. (MTSU photo by J. Intintoli)

His previous contract was set to expire in December 2023. The extension means McPhee, now in his 21st year as chief executive officer of the university, can serve until Dec. 10, 2026.

In other business, trustees approved requests for two new academic degrees: a Bachelor of Science in public writing and rhetoric and a Master of Science in supply chain management.

Provost Mark Byrnes, in materials prepared for trustees, said the public writing and rhetoric degree will be the first of its kind in Tennessee. The proposed program, which goes next to the Tennessee Higher Education Commission for final approval, will be a viable double major for students in other fields that require strong writing skills.

“Rhetorical skills, like process documentation and internal communications management, will continue to be needed as large companies establish new headquarters in the greater Nashville area.”

Byrnes called supply chain management “an important industry segment in the Midstate area,” adding that the Nashville Area Chamber of Commerce lists it as a target industry. 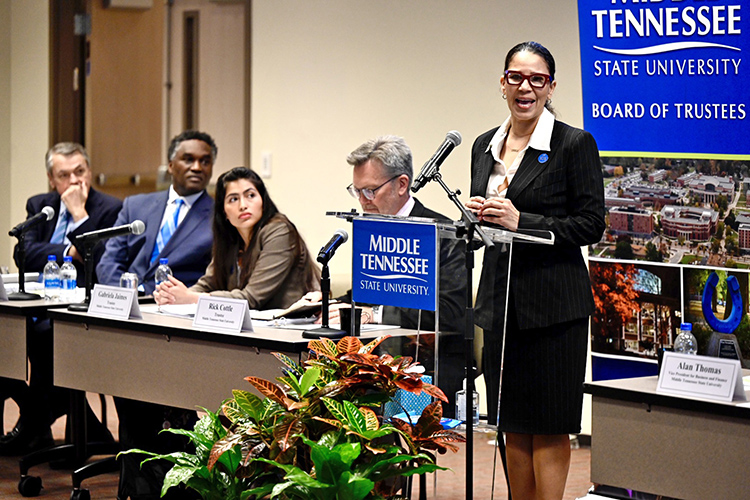 Monica Smith, MTSU’s new assistant to the president for community engagement and inclusion, expresses appreciation for being hired to her new role during the Tuesday, April 5, Board of Trustees quarterly meeting inside the Miller Education Center on Bell Street. Looking on, from left, are Trustees Joey Jacobs and Darrell Freeman, Student Trustee Gabriela Jaimes, and Faculty Trustee Rick Cottle. (MTSU photo by J. Intintoli)

• Approved McPhee’s recommendation to award honorary doctorate degrees to former Tennessee Gov. Bill Haslam and Philip Edward Davis, prime minister of The Commonwealth of The Bahamas, at the May commencement ceremonies.

• Approved the appointment of Monica Smith as assistant to the president for community engagement and inclusion. Smith was founder and president of a Nashville consulting firm and served engagement and service roles at Miami University in Oxford, Ohio, and Honda of America Manufacturing in Maryville, Ohio. 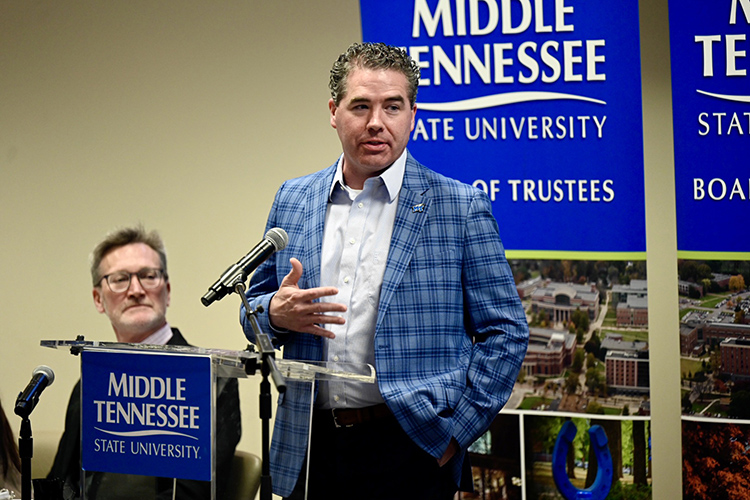 MTSU men’s basketball coach Nick McDevitt thanks trustees and the Blue Raider campus for its support during a highly successful turnaround season during the Tuesday, April 5, Board of Trustees quarterly meeting inside the Miller Education Center on Bell Street. McDevitt and women’s coach Rick Insell were both recognized for their teams’ success. Looking on, at left, is Faculty Trustee Rick Cottle. (MTSU photo by J. Intintoli)