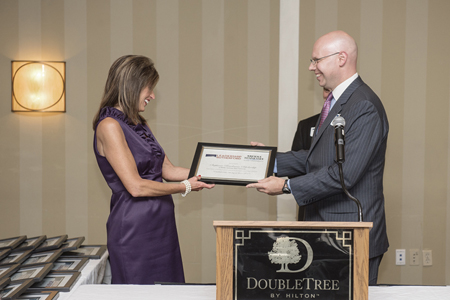 The 2013 graduating class of Leadership Rutherford has shown their appreciation for mentor Stephanie Brackman by establishing a one-time scholarship in her name for an MTSU College of Business student this fall.

The 2013 Leadership Rutherford class has established the Stephanie Brackman Scholarship in the Jennings A. Jones College of Business at MTSU. Pictured at this spring’s graduating ceremony when the scholarship was announced are, from left: Tom Keith, College of Business development officer; Nick Perlick, MTSU director of development; Stephanie Brackman, vice president of operations for the Rutherford County Chamber of Commerce; Lauren Fletcher, chamber director of events; and class of 2013 members Janet Bowman and Pam Jackson. (MTSU photo by Andy Heidt)

Sponsored by the Rutherford County Chamber of Commerce, Leadership Rutherford is an annual leadership development program in which participants gain a deeper understanding of the community around them through speakers, tours and team-building exercises. Brackman, vice president of operations at the chamber, has led the program since 1999.

After the 38 graduates from the 2013 class contributed the money and created the parameters of the fund, members contacted Nick Perlick, director of development at MTSU, who helped establish the scholarship through the university’s Jennings A. Jones College of Business. The scholarship was announced at Leadership Rutherford’s June graduation and has been awarded for the fall semester.

“Stephanie is a tremendous leader in our community,” Perlick said. “She has guided the Leadership Rutherford program to great heights, and we are proud to help honor her contributions with this scholarship that will be awarded in her name.”

The $1,000 scholarship was awarded to incoming freshman Itasca Liddell of Murfreesboro, who met the scholarship qualifications of achieving academic excellence and displaying exceptional leadership qualities while in high school. The student also had to be pursuing a degree in business and be a resident of Rutherford County.

“I am very honored and humbled that the class of 2013 established this scholarship,” Brackman said. “Leadership is a passion of mine, and to be able to help a young person along with their journey is an incredible feeling.”

Brackman is also a 1997 graduate of Leadership Rutherford and served on the board of directors before officially taking over in 1999. Prior to her work at the chamber, Brackman was employed at MTSU for six years, serving on special projects for the Athletic Department and in the President’s Office.

Established in 1986, Leadership Rutherford is aimed at early to mid-career professionals, with participants learning about the judicial, educational, criminal justice and social welfare systems. Gaining insight into these different industries provides networking opportunities, both with peers in the same cohort, as well as with current business leaders and officials.