'MTSU On the Record' examines ..

The long-awaited move to an established, nationally recognized Football Bowl Subdivision conference clearly elevates the standing, competitiveness, and stature of MTSU’s athletics program. Concurrently, support for MT athletics is one of four main goals of the University’s ongoing $80 million Centennial Campaign. Success in raising new dollars for athletics will be crucial to the program’s ability to attract the best student-athletes and provide adequate facilities as a member of the highly competitive C-USA. 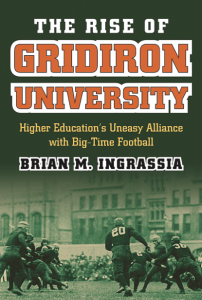 MTSU’s emphasis on growing its athletic programs is clear. Interestingly, one professor’s recently published book chronicles how universities placed similar emphasis on growing their own brands through sports—particularly football—over a century ago. In The Rise of Gridiron University, history professor Brian M. Ingrassia explores how university presidents—including those from the Ivy League—hastened the rise of college football in America. According to Ingrassia, these academic leaders saw football as a “spectacle” useful in helping their universities “reach out to the public.” He explains that it was a way to “help show taxpayers and nonacademics” what they were doing, as well as “get their name out there” so they could “keep getting funding and the publicity needed to turn into larger institutions doing useful things for society, like research and education.”

“The late 1800s and early 1900s was a time when university scholars began to see athletics as almost like the department of public engagement,” Ingrassia concludes. (Little did they know at the time, he writes, how such athletic programs would become the fixtures on college campuses that they are today.)

The alignment of universities into athletic conferences also has historical roots. The first conference, the Big 10, formed around the turn of the last century, Ingrassia says, to “pool competitive resources” and “control and maximize revenues from the sport”—all of which is still its function today. More than a century later, MTSU’s own brand potential and financial prospects are boosted by smartly tapping into C-USA—specifically the conference’s significant national and regional television exposure and revenue sharing through partnerships with CBS Sports, Fox Sports, and ESPN.

The positives for students, alumni, and the community alike are clear, Ingrassia says. “Elevating sports conferences maintains good relations with alumni. Plus, students want to attend universities with big-time football and athletics, and it’s also a way for the public to connect.” And even though he stresses that academic programs are a central component of a university like MTSU, Ingrassia concedes that other campus entities are unable to create a sense of community the way intercollegiate athletics do.