Crushing Your MTSU Finals: A G.. 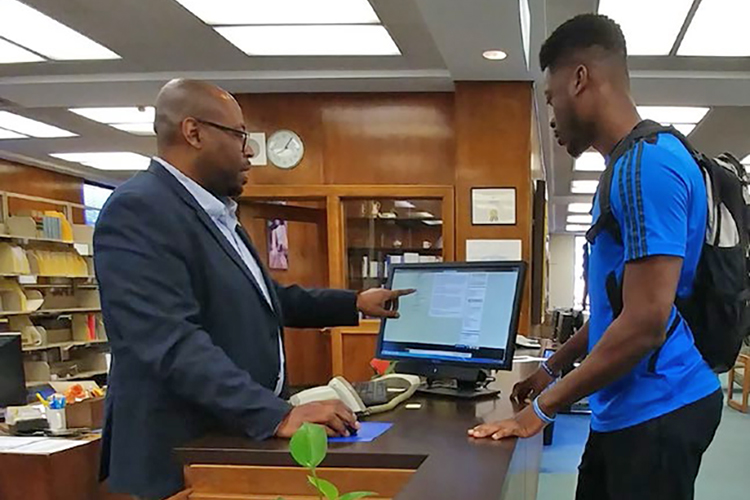 Brandon Owens is on a mission. He wants to connect the American public with African American history and culture through his work at the library of a historically black university in the Midstate.

He’s already doing that to degree as assistant librarian for technical services at the John Hope and Aurelia E. Franklin Library at Fisk University in Nashville, Tennessee, where he provides leadership, management, direction, and oversight for all aspects of technical services including cataloging, serials and collection development, binding, and book repair.

This is a recent promotion for Owens, who just completed Middle Tennessee State University‘s Master of Library Science program, a fully online offering that is increasingly popular among former educators and those hoping to become academic librarians.

In this undated photo, MTSU alumnus Brandon Owens assists a student in his role as assistant librarian for technical services at the John Hope and Aurelia E. Franklin Library at Fisk University in Nashville, Tennessee. Owens is a graduate of MTSU’s Master of Library Science online program. (Photo courtesy of Clarke Bagsby/Fisk University)

Owens also manages the library’s collection of printed materials and electronic books and databases for Fisk students. Before working and being promoted at Fisk, Owens was at another HBCU, Alabama State University in Montgomery, where he was the cultural heritage manager at the library there. He said the MTSU MLS program helped him understand the industry a whole a lot better.

“I worked in two academic libraries prior to enrollment, but I was never a professional librarian. There were still some fundamental library concepts and terminology I did not understand,” said Owens, who also lives in Nashville. “The MLS program at MTSU gave me a deeper understanding of the profession and the core values of librarianship.”

The program being completely online meant Owens would be taking the first such classes of his academic career. He said the professors made the adjustment an easy one since they took the time to outline detailed objectives and goals. He also liked that the professors shared their grading rubric, which he says gave him a clear understanding of how his work would be evaluated.

Since the classes were outlined in the syllabus, Owens said he was able to sync up his assignments’ due dates with his work and personal calendars, so he’d never miss a deadline. Like most online students, he said being on top of time management was key.

“I was able to set aside time for learning on my own terms, in the late evenings, early mornings, and weekends,” Owens said. “With proper planning, it was much easier than I thought.”

While getting organized was easier for him, Owens said the classes were more rigorous than he expected.

“At first, I assumed taking online courses would be much easier than taking traditional courses on campus. The coursework, however, was not necessarily easier,” Owens said. “You can view lectures and participate in discussion forums at your own convenience, but you must be prepared to spend at least three hours per week per course to read, watch instructional videos, and engage in discussions.”

Because of the HBCU libraries and their importance to the community and to himself, Owens decided to pursue a Ph.D. in public history at MTSU while simultaneously working on the MLS degree.

Because of MTSU’s MLS program and his appreciation of HBCU libraries and their role in America, Owens’ goal is to become dean of an HBCU library once he finishes up his professional residency at Fisk. 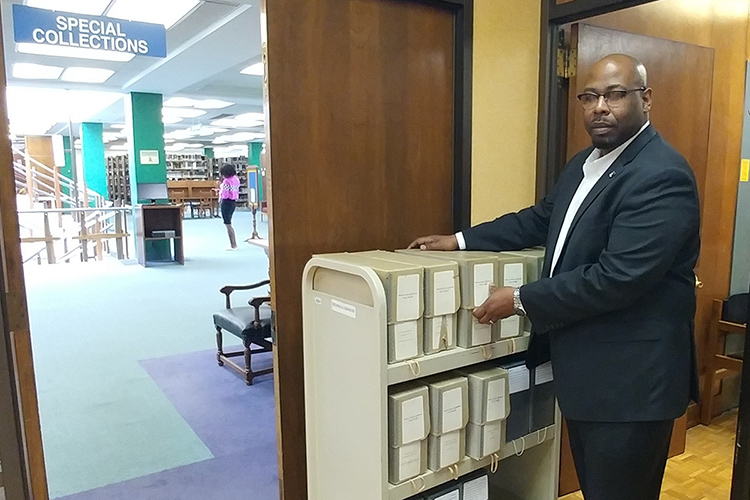 MTSU alumnus Brandon Owens is shown on the job as assistant librarian for technical services at the John Hope and Aurelia E. Franklin Library at Fisk University in Nashville, Tennessee. Owens is a graduate of MTSU’s Master of Library Science online program. (Photo courtesy of Clarke Bagsby/Fisk University)