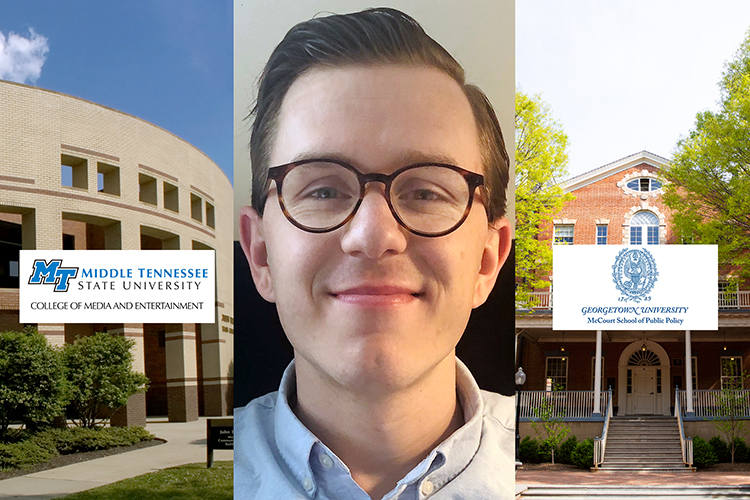 An MTSU media master’s graduate is ready for another master’s degree … and a doctorate … and a headfirst educational immersion in American government, all in that political vortex known as Washington, D.C.

And Ben Burnley is eager to dive in when classes begin Aug. 26 at Georgetown University’s McCourt School of Public Policy.

The former Nashville resident and his wife packed up this summer and moved to their new home in Virginia, across the Potomac River from Washington and the university.

Georgetown is starting its fall 2020 semester online with a limited number of on-site courses.

Burnley is starting his adventure with a course load that includes microeconomics, an “insider’s view” of political campaign management, public policy process, statistical methods for analyzing policy and more. It’s all part of his plan to earn a second master’s degree, this time in public policy, and a doctorate in American government — at the same time.

He and his fellow scholars will have unique access to policy research, experts and opportunities, including learning from McCourt fellowship holders who’ve served in Congress, led presidential campaigns, worked in internationally renowned media and advised presidents.

Perhaps it’s also an opportunity that the current health environment will limit his nonacademic distractions to trips like getting outside to gaze at the Washington Monument or masking up in the visitors’ galleries of the House and Senate to watch the sausage of government grind along.

“One of the things that really drew me to Georgetown as an option was the close proximity to literally every element of the government,” Burnley said of his choice.

“Different schools offer different things, whether it be focuses of research, or different faculty members that are prominent in different parts of the field, but to me one of the draws of Georgetown was the ability to be so close to so many things, whether it’s ‘I want to go see what’s going on in Congress! Does the university have a way to get a spot in the gallery?’ Or ‘Hey, someone’s doing a talk at a think tank tonight; I’d love to make my way over there.’

“It’s something that feels like a whole additional educational amenity to going to Georgetown, so I’m thrilled and … I think it’s going to really benefit the educational element of it.”

Burnley’s path from French horn performance major at Florida State University to Nashville-based touring musician to 4.0 scholar calculating social media’s effect on politics in MTSU’s College of Media and Entertainment is a fascinating one.

The Orlando, Florida, native’s lifelong love of playing music led him to a Bachelor of Arts degree from Florida State.

After graduation, a friend took a job in Nashville and Burnley joined him, intending to “do the Nashville singer-songwriter thing, and I ended up getting a gig playing guitar with a band that I knew from Orlando.”

He also worked as a digital rights administrator for a music publisher, ensuring that its artists received accurate royalties for their work.

He heard about nearby MTSU and its internationally renowned Department of Recording Industry, too.

“As that band was deciding to go our separate ways, I really plugged in to the 2016 election and was really trying to understand more of what was going on, both in policies and in the media,” Burnley said, “and it sort of aided that transfer from music to political communication and political science.”

In MTSU’s School of Journalism and Strategic Media he found the Media and Communication Master’s Program, where he wanted to focus his studies on how closely social media users, particularly on platforms like Facebook and Twitter, follow different types of news.

“The main finding was simply that those that use Facebook tend to have a smaller scope in their news salience — that is, their awareness of what’s going on,” Burnley said.

“Facebook is really helpful in keeping you interactive with ‘neighborhood news’ — the news of the people that are closest to you, the goings-on of people that maybe you see every day.

“The opposite was true with Twitter followers. … Simply by using this site, your awareness of international and national news picks up much above the average individual. … Twitter, simply by design, encourages behavior that is more like news consumption.”

His MTSU master’s thesis, published shortly before his May graduation, is an especially timely look into how social media has — and may again — affect U.S. voting decisions. “Social, Mediated Democracy: Modeling the Effects of Social Media Use and Deliberative Behaviors on Voting” is available here.

He admits that he was “terribly afraid of the math side of things” when he started his MTSU degree. He credits media college professors Ken Blake and Jason Reineke, along with political science professor Andrei Korobkov, with nudging him toward his new focus.

“I came into the program as a former musician, and leaving I feel like a junior social scientist, and I think that speaks to their ability to not only teach in a classroom but to really build the skills I needed to succeed in this program and going forward,” Burnley said. “The three of them absolutely changed the trajectory of my career.

“I came to Nashville for music, and I ended up finding MTSU and having it become sort of this big transformational thing.”