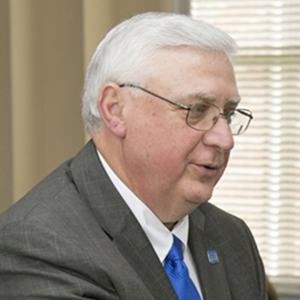 Family, friends and colleagues of Dr. Jim Burton gathered recently inside the Tom H. Jackson Building to celebrate his tenure as dean of the Jennings A. Jones College of Business.

Burton announced last fall that after 14 years, he would be stepping down as head of the business college on June 30 and moving into an emeritus position.

A capacity crowd gathered in Cantrell Hall of the Jackson building Thursday, April 18, to offer words of thanks and praise for the straight-talking leader of the nationally recognized business program.

Dr. Mike Boyle, dean of University College, noted that Burton was among the faculty leaders who mentored him about what it takes to be a college dean when he came to MTSU.

“I think everybody in here knows him and knows his communication style,” Boyle said of Burton. “You do not misunderstand Dr. Burton. He will give it to you exactly as he thinks. He blows no smoke. It will be raw; it will be unvarnished.

President Sidney A. McPhee praised Burton for his “incredible leadership” in making the Jones College of Business “one of the best, most highly regarded colleges of business in the world.”

“I can’t think of a better person to point out who has given significantly to this university, from an academic leadership standpoint, as dean,” McPhee said, calling Burton “an individual who is known around this state in both the nonprofit and for-profit world.”

Dr. Charles Baum, chair of the Department of Economics and Finance, lauded Burton for leading the college with integrity and conviction while strongly supporting department chairs and faculty with needed resources.

“I’ve been very grateful and reassured to know that I was working for a good man, a man of faith and a man of high values,” Baum said.

Among those Burton thanked for supporting him was his wife of 45-plus years, Nancy, who was in attendance along with several other family members, as well as numerous faculty, administrators and community members he’s worked with over the years.

Burton emphasized the role his Christian faith has played in his personal and professional life.

“My faith is important to me,” he said. “I intend that my faith should influence who I am and what I do and how I do it.”

Outgoing business dean Dr. Jim Burton, left, receives a gift and congratulations from Dr. Charles Baum, chair of the Department of Economics and Finance, during a celebration reception in Burton’s honor.

He also thanked his family — “To my family I owe everything” — as well as MTSU colleagues and friends he’s worked with during his 23 total years at the university, saying, “You have quite regularly amazed me.”

Burton gave special thanks to Dr. Barbara Haskew, who hired him as an accounting professor in 1990 and was provost when Burton was selected as dean.

“Thank you for starting me on my now 23 years at MTSU,” he said.

Citing a scripture used recently by his pastor, Burton said he planned to spend the coming extra time on his hands thinking on “whatsoever is true, noble, pure, lovely, admirable or praiseworthy.”

And, drawing laughter from the crowd, he noted that he could do those things “at the lake.”