Back from Spain, MTSU outdoor .. 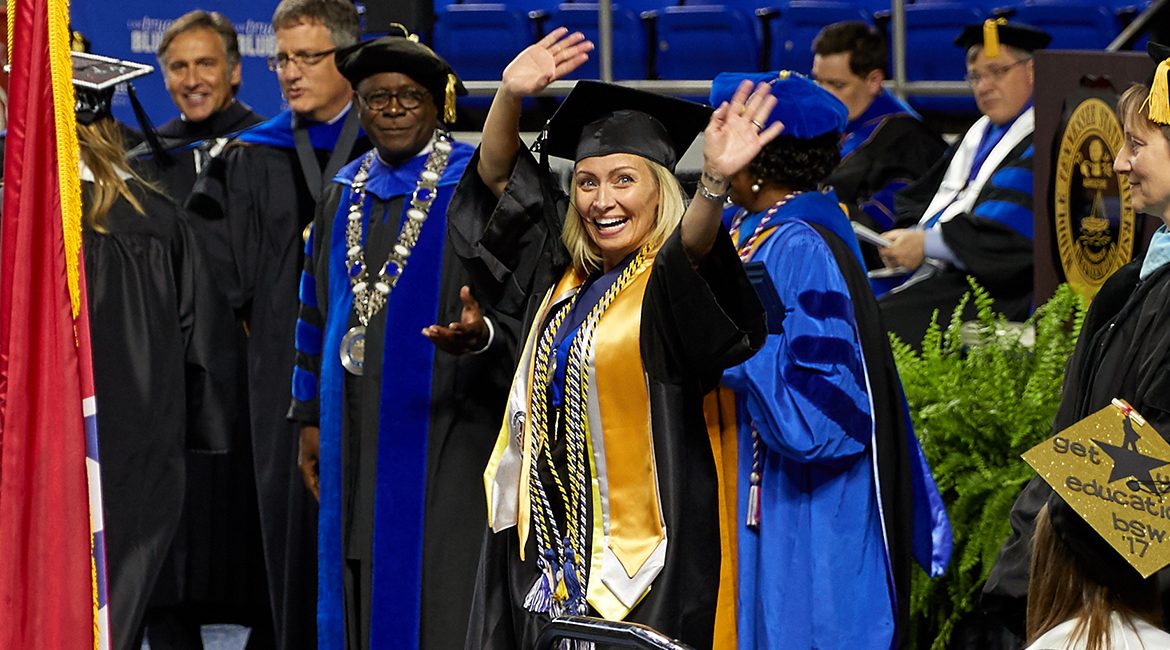 The woman behind a successful construction and development business is using an MTSU education to build a new life for herself.

Jamie Butera is taking some time off before she builds upon her 2017 MTSU bachelor’s degree in psychology to pursue a master’s degree on the way to a counseling career.

She’s earned the time away from her studies.

“It means so much to me,” said Butera. “I worked really hard, and, I guess because I’m an older student … I took things so much more seriously maybe because they were more valuable to me.”

After marrying her high-school sweetheart, Butera first became a mother at 18. But the marriage soured, she said, leading to a turbulent divorce and custody battle for their 9-year-old daughter.

With few resources at her disposal after divorce proceedings, Butera worked for a cupcake company to make ends meet while trying to get sole parental rights.

“The process was so daunting and so lonesome and so confusing,” said Butera.

A second daughter became gravely ill with diabetic ketoacidosis while Butera was trying to study, forcing her to put her education on hold while the girl fought her way back to health.

Butera’s eldest daughter encouraged her mother to take a class with her at MTSU. Together, they enjoyed a wine appreciation course taught by Dr. Tony Johnston, a professor in the School of Agribusiness and Agriscience.

That was the catalyst for Butera’s decision to go for a bachelor’s degree at last.

“I really loved MTSU,” said Butera. “I didn’t know how much I would love it.”

Butera was inducted into the MTSU chapter of Phi Kappa Phi, the nation’s oldest collegiate honor society, as a result of her academic prowess and near-perfect 3.918 GPA.

She somehow made time for extracurricular work as well, supporting her criminology minor by joining the university’s 2016-17 Forensic Anthropology Search and Recovery Team, or FASR, led by Dr. Hugh Berryman of MTSU’s Forensic Institute for Research and Education. The student team assists law enforcement agencies in recovering, identifying and documenting skeletal remains from crime scenes and participates in community outreach and research.

Her eldest daughter, 24-year-old Lauren, graduated from MTSU in 2014. Middle daughter Bella, fully recovered from her illness, is now 16. The youngest daughter, Sophie, is 13.

Butera’s Franklin, Tennessee-based business, American Development Partners, and her family are the focus of a more serene life now.

She said the difficult times in her life inspired her to look seriously at counseling trauma survivors after she achieves the necessary credentials.

“Just seeing the effect of counseling and how it can change the outcome after trauma made me want to focus on doing the same for other people,” said Butera.