Boosting Your Degree with Rese..

NPT documentary will show how Tennessee made histo... 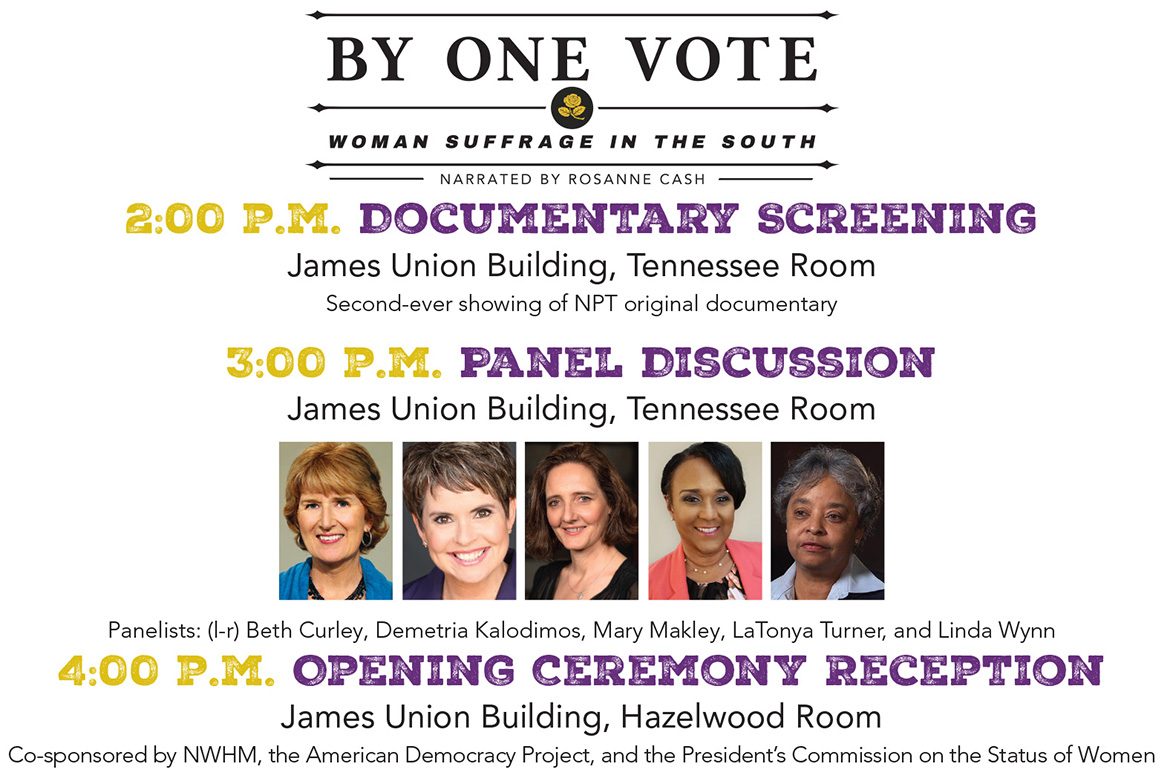 Tennessee’s pivotal impact on the passage of the 19th Amendment to the U.S. Constitution is chronicled in a film to be screened on the MTSU campus.

For only the second time ever, the documentary “By One Vote: Woman Suffrage in the South” will be shown at 2 p.m. Tuesday, March 3, in the Tennessee Room of the James Union Building. The event is free and open to the public.

Off-campus visitors attending the event can obtain a special one-day permit at www.mtsu.edu/parking/visit.php.

Limited parking will be available in the Ingram Building lot off Middle Tennessee Boulevard with golf cart shuttle service to the James Union.

Overflow parking, with bus shuttle service, will be available from the Rutherford lot on the east side of campus. A searchable campus map is available at http://tinyurl.com/MTParkingMap.

Produced by Nashville Public Television and narrated by country singer Rosanne Cash, the film guides the viewer through the events leading up to the all-male Tennessee General Assembly’s vote to approve the amendment on Aug. 18, 1920.

The amendment reads, in full, “The right of citizens of the United States to vote shall not be denied or abridged by the United States or by any state on account of sex. Congress shall have the power to enforce this article by appropriate legislation.”

Before the screening, MTSU will conduct the official opening ceremony of its National Women’s History Month celebration at 1 p.m. in the Tennessee Room. The official theme of this year’s observance is “Nevertheless She Persisted: Valiant Women of the Vote.” The film’s executive producer, NPT President Emerita Beth Curley, will introduce the documentary.

“Beth will be talking about the making of that film, the planning of that film, the efforts that it took, how the producers put it together,” said Dr. Mary Evins, coordinator for the American Democracy Project at MTSU and associate professor of history in the University Honors College.

A select group of women “trailblazers” from among MTSU’s faculty, staff, students and alumnae will be honored during this time

“By One Vote” has only been shown publicly once before, during an event at the Tennessee State Museum in November 2019.

“They were gracious to come to us back in the fall even before the showing at the Tennessee State Museum to ask if MTSU would be the university host for it,” Evins said.

“They know what a civically engaged campus we are, how much we care about voting and how much we advance the scholarship of women’s suffrage.”

Following the documentary, Curley will participate in a panel discussion titled “By One Vote: Woman Suffrage in the South 100 Years Later.”

Joining Curley will be longtime broadcast journalist and executive producer of the new Nashville Banner Demetria Kalodimos, independent producer/editor Mary Makley and Fisk University professor Linda Wynn at 3 p.m. in the Tennessee Room. NPT journalist LaTonya Turner will moderate the event, and a reception will follow the discussion at 4 p.m.

The event is sponsored by the President’s Commission on the Status of Women, the National Women’s History Month Committee and the American Democracy Project.