In the News: Professor's colum..

Their Eyes are on the Sparrow 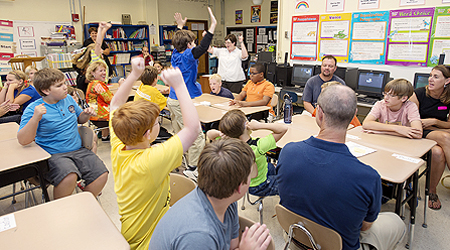 Students, parents, faculty and staff at Homer Pittard Campus School enjoyed a cyber-celebration on Aug. 27 along with other top performing schools across Tennessee.

The K-5 public school, which is jointly operated by MTSU and Rutherford County Schools as a laboratory school, has been deemed a “Reward School” under the state’s new accountability system. That means Campus is among the 10 percent of schools statewide with the highest achievement or overall growth on standardized tests scores.

Homer Pittard Campus School fifth-graders in Jamie Starling’s class react to learning that they are a “Reward School,” placing among the top 10 percent of Tennessee schools under the state’s new accountability system. Campus students scored in the top 5 percent of students on the TCAP test. (MTSU photo by Andy Heidt)

Campus School’s designation was based on achievement, with its students scoring within the top 5 percent statewide.

Gov. Bill Haslam and First Lady Crissy Haslam joined other state officials for the announcement, made at Brentwood’s Kenrose Elementary School and streamed live by MTSU to 100-plus other schools across the state, including Campus School.

“Thank you for working hard,” Haslam said. “Thanks for showing that Tennessee students can be as great as students anywhere else.”

“It feels wonderful,” said Campus School Principal Chontel Bridgeman after her intercom announcement of a schoolwide celebration on Tuesday, Aug. 28. “My teachers work hard every single day, and our parents are so supportive of us. It’s just nice for them.”

Campus and other schools received the new designation as part of the Tennessee Department of Education’s new accountability report. The report is part of the state’s request for a waiver from the original accountability measures written into the No Child Left Behind law.

Under the waiver, Tennessee proposed to raise overall school achievement by 3 to 5 percent and to cut achievement gaps in half over an eight-year period. To track progress, the U.S. Department of Education required Tennessee to identify three groups of schools:

“I’m very proud to be a teacher in Tennessee right now,” said Campus School fifth-grade teacher Jamie Starling, “but I also want to say that we do focus on using the data from testing to make sure we’re giving each student what they need at their level.

“The children here are stupendous … They know that school is difficult, but that the rewards are worth it.”

Bridgeman said the MTSU partnership is important because education majors who work with Campus teachers are able to provide extra attention to students within the classroom.

“One of the requirements for my teachers is that they supervise (MTSU) practicum students, so we work with a lot of students going through the education program,” she said. “We get them prepared for their student-teaching experience.

“I expect my teachers to be able to use research-based strategies because they are influencing those who will be going into the profession.”