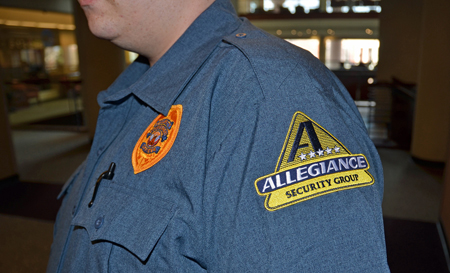 MTSU students returning to campus in the new year will notice an extra security presence in high traffic areas.

Christopher Cunningham of Allegiance Security Group patrols outside the James E. Walker Library earlier this month. Cunningham is one of two security guards MTSU has hired to patrol high-traffic areas on campus, such as the library. (MTSU photo by News and Media Relations)

“We are doing this in order to provide more contact with our community members in specific areas of campus … namely, a few areas where we expect more people to congregate and use in the typical business work week,” MTSU Police Chief Buddy Peaster said.

The university is contracting with Allegiance Security Group LLC to provide the unarmed guards, who began working just after Thanksgiving and typically will work Monday through Friday from 8 a.m. to 4:30 p.m.

“The main thrust initially is to have uniformed security guards to interact with the public to answer questions and to help with problems,” Peaster said.

“They also will be a part of crime deterrence strategies in that they will maintain a visible security presence and can contact MTSU Police with any concerns or problems.”

Peaster explained that regular MTSU Police officers have to respond to calls for service and cannot easily be stationed in one location. The security guards will be used in specific areas and can be dedicated to smaller concentrated areas, he said.

The cost runs between $40,000 and $50,000 for two security guards for an entire year, an expense Peaster says “is a less expensive way to utilize a security presence in specific areas of campus.”

Other universities, such as the University of Memphis, Vanderbilt University and the University of Tennessee-Knoxville, already use security guards within their staffs, Peaster said, adding that most of Allegiance Security’s college campus clients are in Florida. Allegiance has guards at Hillsborough Community College in Tampa and at Polk State University in Winter Haven.

In addition to MTSU, Allegiance Security currently places personnel in several locations in Tennessee, including Memphis, Nashville and Chattanooga. Allegiance Security has security guards working locally at the Nashville International Airport, Fleet One in Antioch and Cinram in La Vergne.

MTSU Police Sgt. David Smith serves as liaison between the university and Allegiance Security and meets with the guards each morning to discuss assignments.

Smith emphasized that the guards don’t have police authority and that their purpose is to alert university police officers about problems or potential problems. The guards are equipped with two-way radios and are in constant contact with university police.

“It frees us up,” Smith said. “It’s impractical for patrol officers to do extended periods of foot patrol like security guards could.”

“We have a problem of unattended items getting stolen on a regular basis,” said Smith, recalling a backpack theft inside the university bookstore on the first day of classes last fall, resulting in the student victim losing a tablet computer, a laptop, books and several other items.

“We think it will be a deterrent and a good policing effort on our part to make the campus community feel a bit safer,” Smith said.