Though he considers himself an introvert who grew up in a camping trailer in the middle of the desert behind a garage and experienced a tough upbringing, Civil Air Patrol Maj. Gen. Mark Smith’s extroverted side brought motivation and inspiration to an overflow Middle Tennessee State University classroom.

The national commander of the U.S. Air Force auxiliary group spoke of mentorship, servant leadership and “rising from the ashes and learning from failure” Friday (March 22) as he talked to more than 100 students, faculty and staff in the Business and Aerospace Building. 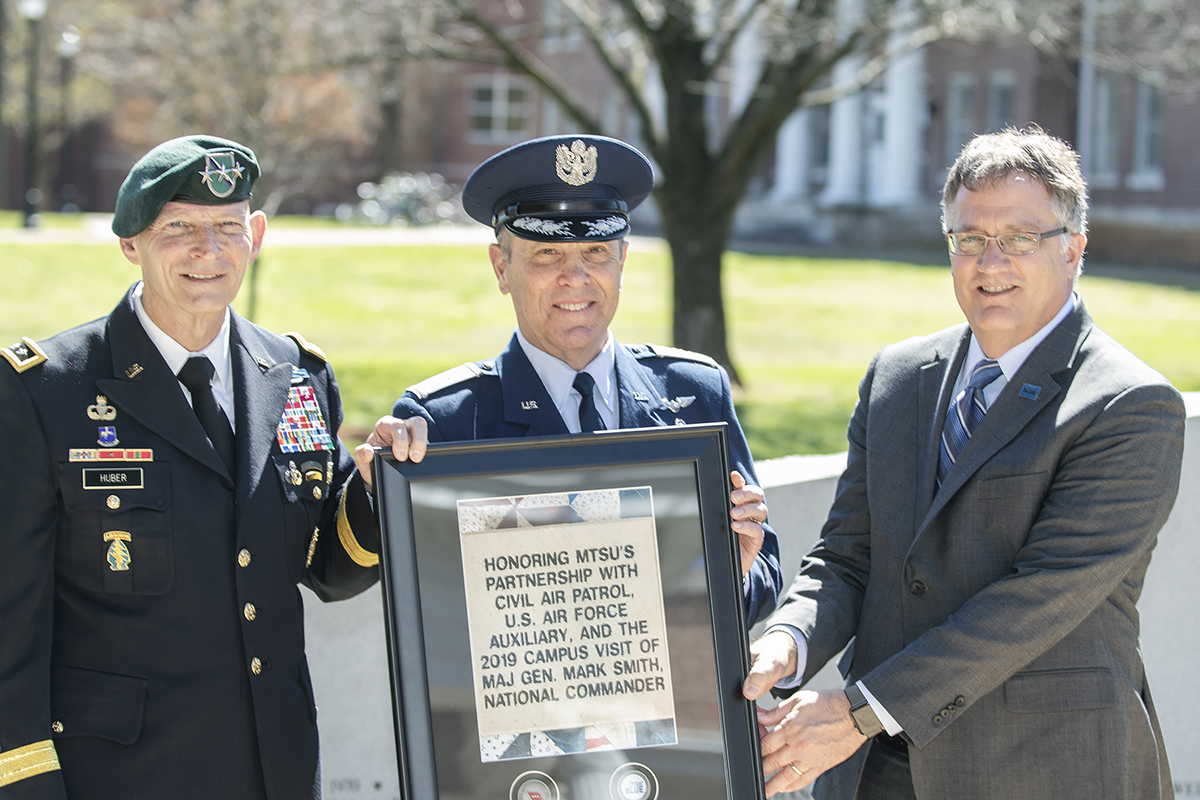 “All of you will be leaders (one day),” Smith shared near the end of his 45-minute lecture and before fielding several students’ questions. “I’m jazzed for you. I would love to be in your position.”

Smith, who lives in Albuquerque, New Mexico, said U.S. Air Force Lt. Col. Ray Powell mentored him to be able to attend the Air Force Academy. “He invested in me personally, allowing me to achieve my dream. The power of mentorship is an amazing thing.”

“Hopefully, at MTSU,” he continued, “you have someone investing in you and helping you out, to help you achieve your dream and get you where you are going.”

Smith, who favors a “servant leadership” style, suggested students “pay it forward, to help those coming behind you to make it happen (for them). Find someone, talk to them, develop a road map from Point A to Point B. Invest in them with your talents as well.”

The Civil Air Patrol leader said his low point came May 23, 1993. While up for a promotion to colonel, he was stopped by authorities and charged with drinking and driving.

“It was a self-inflicted wound and it was all on me,” he told the captive audience. So he took responsibility and regrouped. The former pilot eventually became colonel and he retired in 2000.

Victoria Crouch, 20, an aerospace professional pilot major from Maryville, Tennessee, considered the talk “very inspirational, especially for somebody wanting to go into a leadership position. I hope to be a captain for an airline. And seeing someone with failure (in their past), it was inspiring and shows me I can overcome my own failure.”

Naomi Shannon, 15, of Springfield, Tennessee, a sophomore at Greenbrier High School and a cadet in the USAF auxiliary, said she “was interested to hear about his past. The fact that he flew those planes and that you can learn from people’s mistakes and not try and make the same mistake.”

Smith was introduced by Casey Brinegar, an MTSU senior with academic ties to both the Honors College and College of Behavioral and Health Sciences. After his talk, she presented him with a framed photograph from ODK and the Honors College. 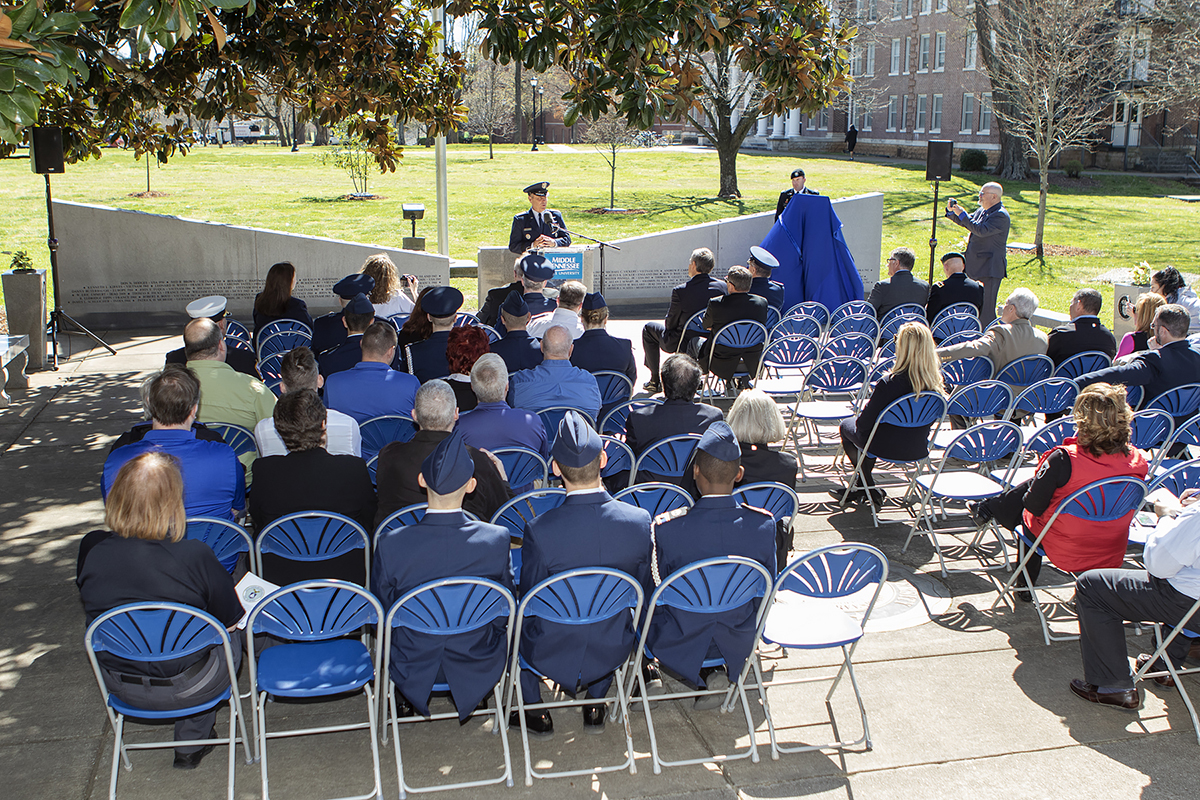 Civil Air Patrol CEO and national commander Maj. Gen. Mark Smith tells an audience gathered Friday (March 22) outside the MTSU Veterans Memorial how appreciative he is for the partnership between the two organizations. A ceremonial brick was placed at the memorial site to recognize him and the CAP. (MTSU photo James Cessna)

An afternoon recognition ceremony for Smith at the MTSU Veterans Memorial included the placing a brick “Honoring MTSU’s Partnership with Civil Air Patrol, (the) U.S. Air Force Auxiliary and the 2019 Campus Visit of Maj. Gen. Mark Smith, National Commander,” the brick and a commemorative plaque given to him read.

“I consider receiving this brick from MTSU as an amazing honor, not for me, but for the Civil Air Patrol,” he said. “It celebrates the partnership MTSU and the Civil Air Patrol has had for a number of years, something to help equip young people for success.”

“I believe that the existing partnership we have is outstanding, but there’s opportunities for us to grow and expand that partnership in a manner that’s mutually beneficial to both organizations,” he added.

The College of Basic and Applied Sciences and its aerospace department signed a partnership with the CAP’s Tennessee Wing in 2014, providing cadets ages 12 to 18 with opportunities to interact with faculty and explore the Murfreesboro campus.

MTSU hosted the Tennessee Wing Cadet Encampment in 2016, 2017 and 2018 and welcomed the 2019 encampment’s leadership cadre to campus earlier this month. The university has also helped lure the Engineering Technology Academy away from Auburn University. 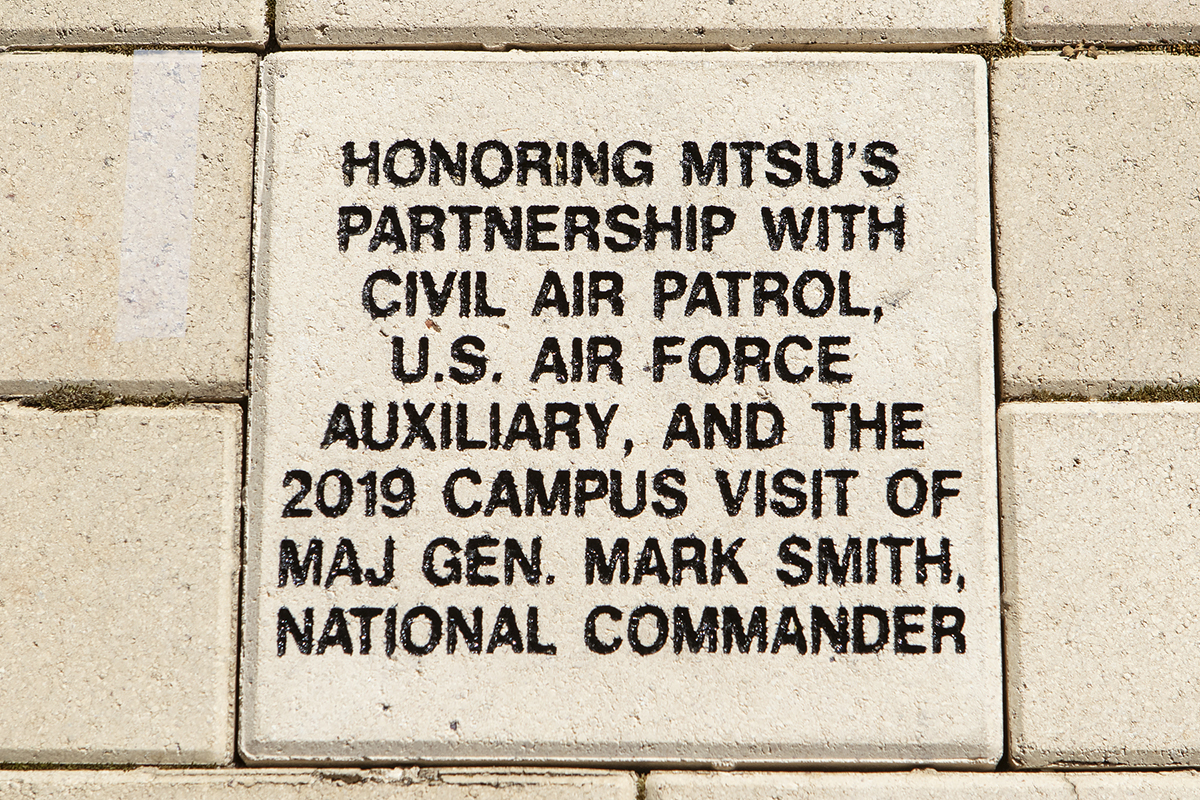 A special brick recognizing the partnership between MTSU and the Civil Air Patrol has been placed at the MTSU Veterans Memorial. A recognition ceremony was held Friday (March 22). (MTSU photo by James Cessna)

Earlier in the day, Smith and a Civil Air Patrol group with him toured the aerospace department’s air traffic control and other facilities. They saw MTSU’s Flight Operations at Murfreesboro Airport before Smith left to return home.

MTSU has more than 300 combined undergraduate and graduate programs. Aerospace is one of 11 College of Basic and Applied Sciences departments. 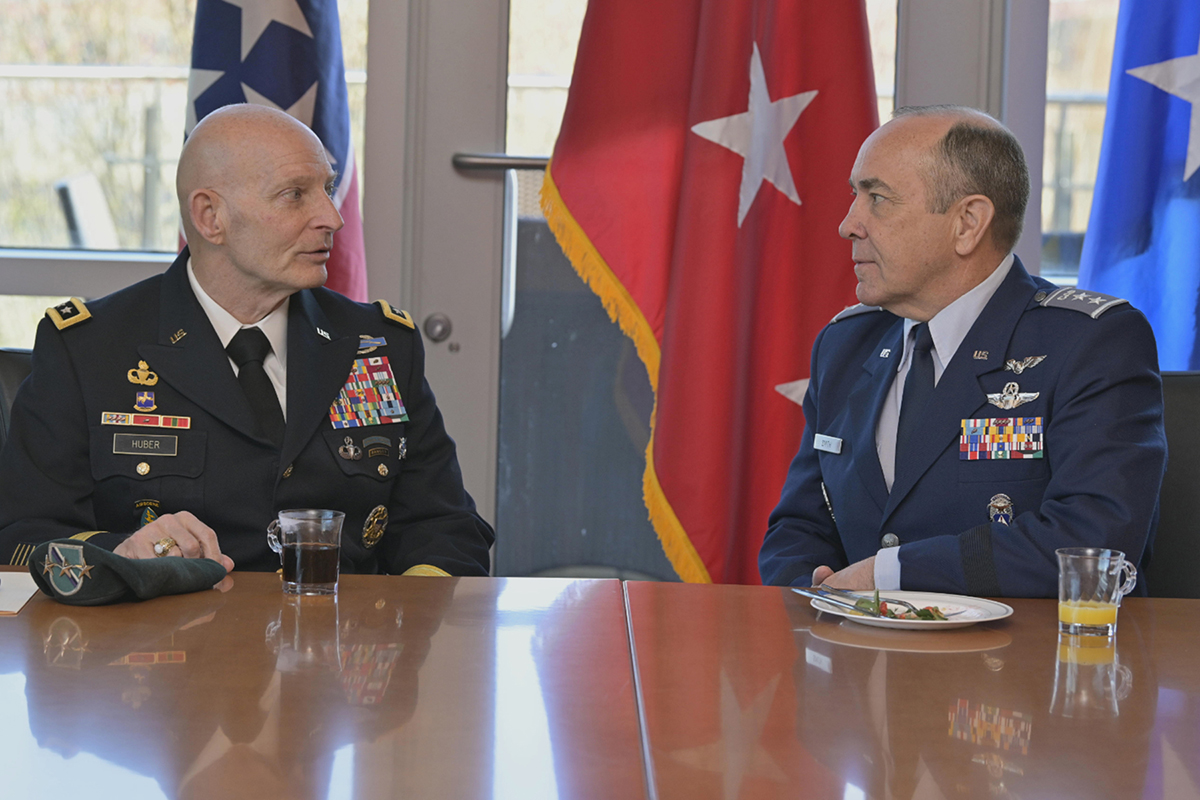