‘MTSU On the Record’ focuses o.. 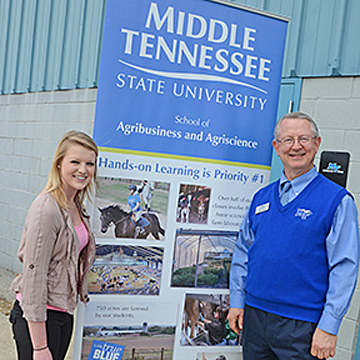 The event, held in the Tennessee Livestock Center, drew nearly 200 MTSU students and 11 companies and organizations.

“We were really pleased,” said Dr. Warren Gill, director of the school, which is part of the College of Basic and Applied Sciences. “Attendance was good with both employers and students, too.”

Gill said the event, held March 5, is both a career and an internship fair.

MTSU junior agribusiness student Ashleigh Nash, left, visits with Dr. Warren Gill, director of the School of Agribusiness and Agriscience, during the recent Ag Career Fair, which attracted nearly 200 students to the event in the Tennessee Livestock Center. (MTSU photo by News and Media Relations)

“I’ve never been to one,” said Ashleigh Nash, a junior agribusiness major from Bell Buckle, Tenn., talking about the career fair. I’ve learned a lot about internships and possible jobs, networking and the things I’ve never thought about before.”

Tyler Mowery, a senior animal science major from Ooltewah, Tenn., said the fair “gives a great opportunity for seniors and juniors to look at prospective jobs once they graduate.”

Gill and the ag school coordinated the fair with MTSU’s Career Development Center.

For more on the School of Agribusiness and Agriscience program, visit www.mtsu.edu/abas.

To learn about other career fairs on campus, visit www.mtsu.edu/career/.