World-renowned Islamic studies scholar to give public lecture at MTSU 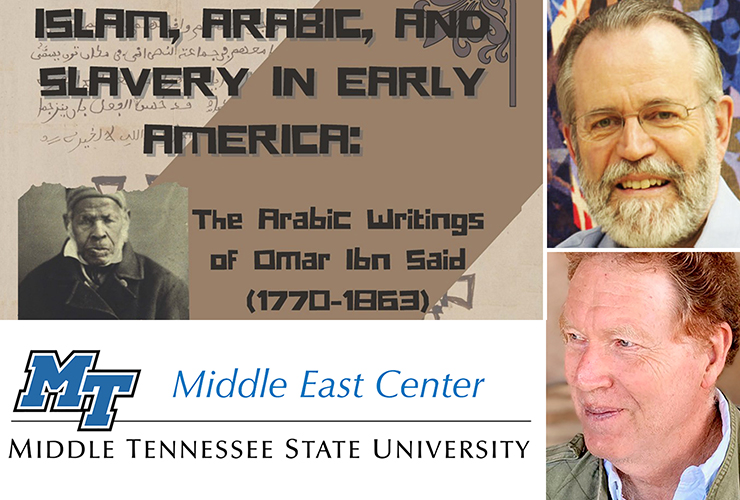 Renowned Islamic studies scholar Carl Ernst will visit Middle Tennessee State University on Tuesday, Oct. 4, to talk to classes and give a public lecture on his latest research project: translating the Arabic writings of an enslaved African.

Ernst is the William R. Kenan Jr. Distinguished Professor Emeritus of Islamic Studies at the Department of Religious Studies at the University of North Carolina at Chapel Hill.

Titled “Islam, Arabic, and Slavery in Early America: The Arabic Writings of Omar ibn Said (1770-1863),” Ernst’s lecture is based on his current project translating manuscripts by Said, an African scholar who was enslaved and transported in 1807 from Futa Toro, a West African region in present-day Senegal, to the U.S., where he wrote theological and autobiographical works in Arabic.

“Dr. Carl Ernst is the real thing. He has, through his writings, established himself as an expert in Islamic traditions, particularly Islamic mysticism (particularly Sufism),” noted Dr. Allen Hibbard, director of the Middle East Center at MTSU and a professor in the Department of English.

“He has also done marvelous translations of mystical poetry from Arabic. He’ll be speaking about his present project (especially exciting) that … fills in a gap in our historical understanding. We are very fortunate to have him visit MTSU.”

Ernst’s extensive global travels in India, Pakistan, Turkey and Malaysia, among other places; knowledge of Urdu, Arabic and Persian; and time spent in libraries and archives have enabled him to develop penetrating perspectives on pre-modern and contemporary Islam. He is especially known for his expertise on mystical traditions.

In addition to his classic study on Sufism, “The Shambala Guide to Sufism,” published in 1997, Ernst’s books “Following Muhammad” (2003) and “Hallaj: Poems of a Sufi Martyr” (2018) have gained wide acclaim and an appreciative readership inside academia and among the broader public.

A campus parking map is available at http://bit.ly/MTSUParking. Off-campus visitors can obtain a one-day permit at https://mtsu.edu/parking/visit.php or park free in the university’s Rutherford Boulevard Lot and ride the Raider Xpress shuttle to the Business and Aerospace Building.

Sponsors of the event with the Middle East Center include MTSU’s Africana Studies Program, the College of Liberal Arts, Department of Global Studies and Human Geography, the Department of Philosophy and Religious Studies and the Distinguished Lecture Fund.