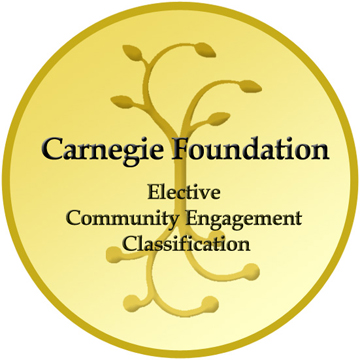 Middle Tennessee State University has been recognized nationally for its community engagement efforts by a higher education research center.

MTSU is among 240 colleges and universities across the country to receive the 2015 Community Engagement Classification from the Carnegie Foundation for the Advancement of Teaching.

MTSU is also among 157 of those institutions that was re-classified for the designation after having first achieved it in either 2006 or 2008. Meanwhile, 83 institutions received the classification for the first time for 2015, according to the Carnegie Foundation.

Professor Bob Gordon, shown standing fourth from right in the second row, and his student team from MTSU’s Department of Electronic Media Communication worked on the filming and production of the 2012 Capitol Street Party in downtown Nashville featuring headliner Luke Bryan. The students gained valuable experience through a partnership between the university and Capitol Records. (MTSU file photo)

For the latest classification, MTSU submitted examples and outcomes of more than a dozen projects in recent years that involved strong community engagement from a variety of academic disciplines. Among them:

“MTSU prides itself in fostering relationships beyond our campus that allow our students, faculty and staff to participate in projects and educational initiatives that advance our academic mission,” MTSU Provost Brad Bartel said. “This classification by the Carnegie Foundation is motivation for the university to continue these efforts and expand them.”

According to Carnegie, unlike its other classifications that rely on national data, community engagement is an “elective” classification — institutions participate voluntarily by submitting required materials describing the nature and extent of their engagement with the community, be it local or beyond. This approach enabled the foundation to address elements of institutional mission and distinctiveness that are not represented in the national data on colleges and universities.

The New England Resource Center for Higher Education, or NERCHE, at the University of Massachusetts-Boston and the Carnegie Foundation partner to administer the classification. The Carnegie Foundation is an independent policy and research center that “supports needed transformations in American education through tighter connections between teaching practice, evidence of student learning, the communication and use of this evidence, and structured opportunities to build knowledge,” according to www.nerche.org.

“The importance of this elective classification is borne out by the response of so many campuses that have demonstrated their deep engagement with local, regional, national, and global communities,” said John Saltmarsh, director of NERCHE. “These are campuses that are improving teaching and learning, producing research that makes a difference in communities, and revitalizing their civic and academic missions.”

A listing of the institutions that hold the Community Engagement Classification can be found at www.nerche.org.

“This is the first time that there has been a re-classification process,” noted Amy Driscoll, consulting scholar for the Community Engagement Classification. “And we are seeing renewed institutional commitment, advanced curricular and assessment practices, and deeper community partnerships, all sustained through changes in campus leadership, and within the context of a devastating economic recession.”