Caelan Cox looked completely different standing inside the MTSU President’s House, Student Union Ballroom and other campus locations Monday, Feb. 18, than he did in October 2018 in his hometown of Chattanooga, Tennessee, when he attended the university’s True Blue Tour event.

Maybe blue face paint had something to do with it. 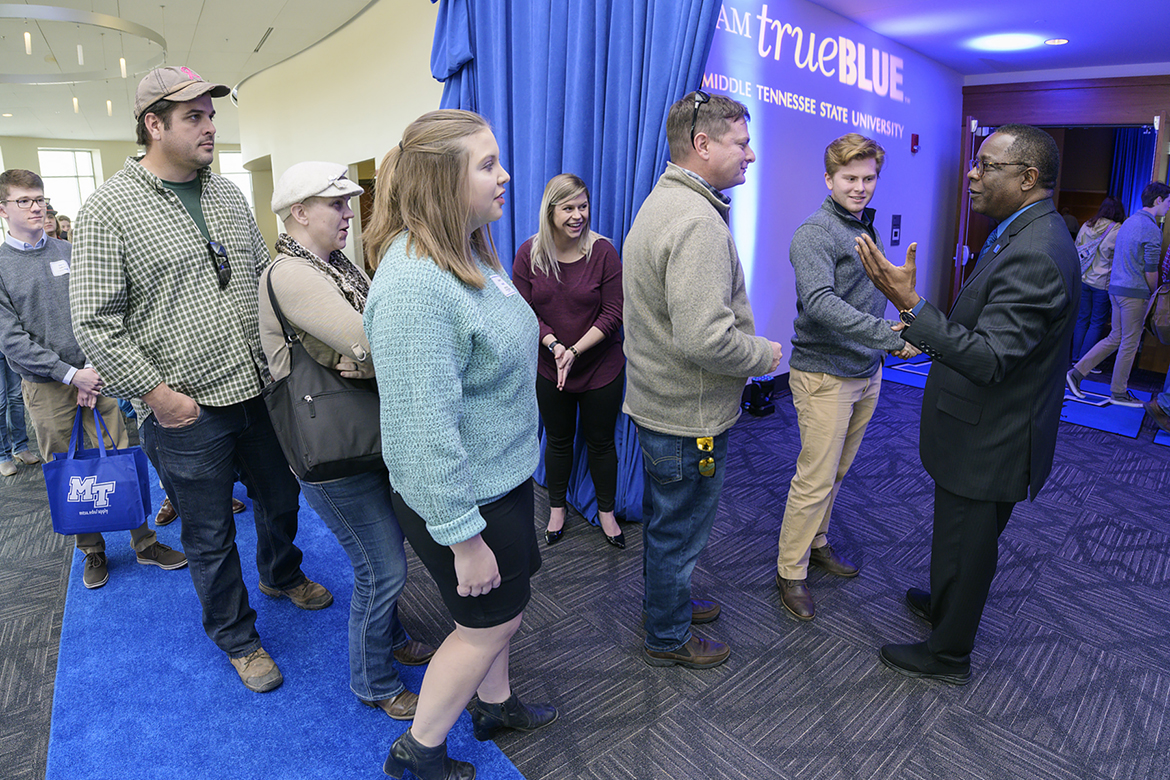 On the blue carpet outside the Student Union Ballroom, MTSU President Sidney A. McPhee, right, greets guests arriving for the Feb. 18 Celebration of Scholars event for prospective students who have been offered Trustee and Presidential Scholarships. (MTSU photo by Andy Heidt)

Cox had his face painted MTSU blue for the tour event at the Chattanooga Convention Center. He also sported a College of Media and Entertainment T-shirt that night as he joined fellow students and their parents or guardians for the university’s annual recruiting event.

Monday, minus the paint, he joined other major scholarship recipients on campus for MTSU President Sidney A. McPhee’s Celebration of Scholars, recognizing nearly 115 high-ability students who have been offered Trustee and Presidential Scholarship awards to attend the university starting this fall.

Scholarship recipients came from Georgia, Kentucky, South Carolina, Alabama, Mississippi, Florida, Virginia, North Carolina, Texas and from all across Tennessee. McPhee met visitors at the blue carpet entrance, then later shared how he hoped they would make MTSU their home for the next four years.

Cox, 19, is homeschooled by his mother, Trish Cox, and plans to study animation. He received a new Presidential Scholarship offer — $18,000 for four years, or $4,500 per year. The scholars must decide by May 1 whether to accept the offer and attend the university, but Cox said he’s already set on MTSU.

“It has a beautiful campus and all of the staff are friendly and approachable,” Caelan Cox said of MTSU, adding that he was looking for an animation degree “and this college has it.”

“He has toured several schools,” said Trish Cox, who has homeschooled him for 2½ years. “This is the place that’s had his heart. It’s the gold standard.”

She admits that her suggestion to paint his face blue probably helped him obtain another $1,500 scholarship that night in Chattanooga.

“The technology he saw (at MTSU) made his eyes light up,” added Trish Cox, who said her son had a similar reaction during the 2018 Chattanooga tour event when he and Department of Media Arts chair Billy Pittard discussed opportunities in animation at MTSU.

“Billy asked Caelan a technical question,” she said. “Caelan’s face lit up because it was the first time in his life someone was speaking his language. I stood there in amazement because I didn’t understand a thing they were saying. I honestly think he was sold on MTSU that very moment.”

At the President’s House, McPhee gave Cox a signed copy of his hardcover book, “China Through the Eyes of an American University President,” filled with McPhee’s photographs from various visits to the country. 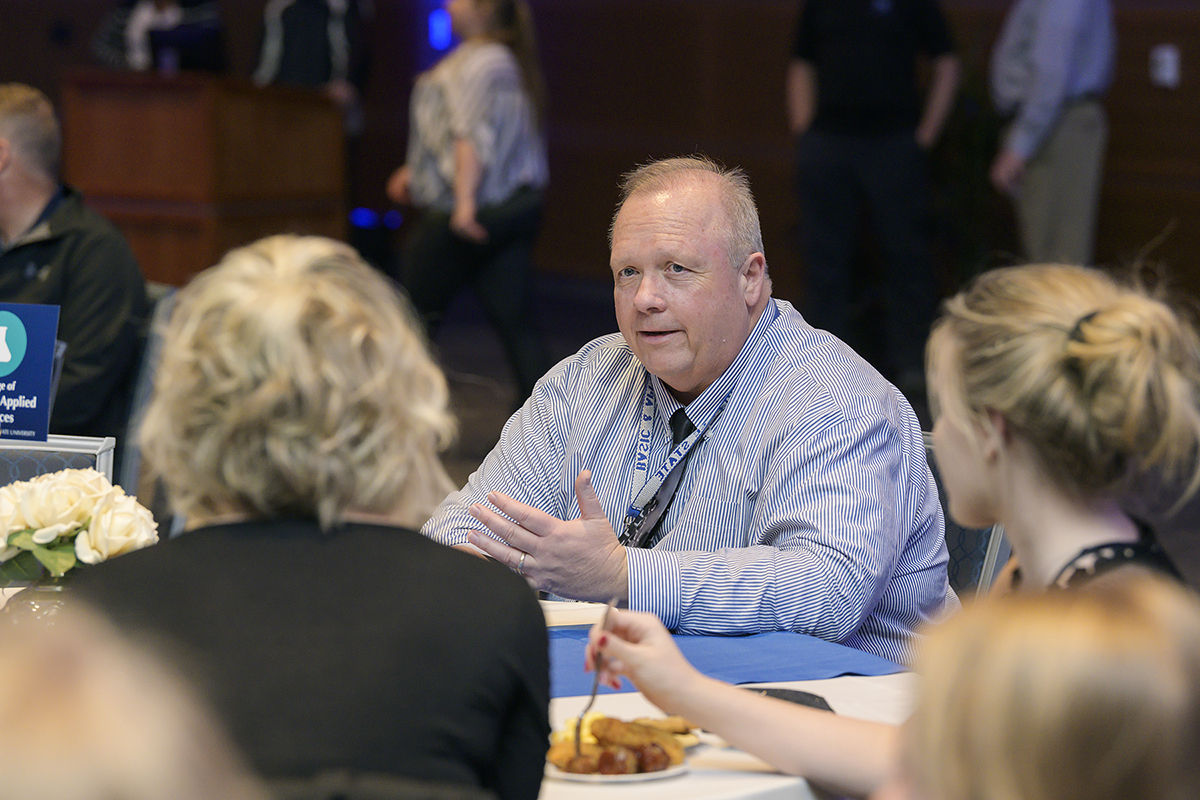 MTSU College of Basic and Applied Sciences Dean Bud Fischer, center, talks with a prospective student and her mother Feb. 18 during the Celebration of Scholars event in the Student Union Ballroom. The university hosted Trustee and Presidential Scholarship recipients for a “blue carpet event” to recognize their academic achievements. (MTSU photo by Andy Heidt)

Janelle Valdez, 18, lives in Smyrna, Tennessee, and is a senior at Central Magnet School, located just down East Main Street from MTSU. The Presidential Scholarship recipient plans to major in physics and minor in Spanish.

“I like that it’s huge and there’s a lot of things to do here,” Valdez said. “My home is close by. The library is really big. There are things I can research here, and I really like the Science Building. A lot of my friends are going to go here, so I won’t feel alone.”

Matthew Valdez, her older brother, is a senior in the Jones College of Business.

After the Celebration of Scholars event, Janelle Valdez toured of the Department of Physics and Astronomy with chair Ron Henderson.

Brentwood, Tennessee, resident Meya Swaminathan, 17, also will be following a sibling to MTSU. She plans to study computer science.

“I like the diversity of the programs and how concentrated they are. There are lots of options to choose from,” said Swaminathan, a Brentwood High School senior who was accompanied by her father, Kris “Swami” Swaminathan, at the event.

“I love the community aspect (of campus). Everyone is very close,” Meya Swaminathan added.

Rick Chapman has a dual perspective as both director of MTSU’s Student Health Services and as a parent of an incoming student. His son Houston Chapman will be a freshman this fall studying media management.

Houston Chapman, who received a Presidential Scholarship offer, is currently a member of the Ravenwood High basketball team. He was unable to attend the scholars event.

“He visited here twice,” Rick Chapman said. “Our son said MTSU was far ahead of other schools in labs. The intramural program is where you can get plugged in. And the new scholarship program made it a no-brainer.”

MTSU boosted the value of and broadened the eligibility for its Presidential Scholarship last fall, a move that more than doubled the amount awarded to high-ability freshmen who enroll by Dec. 1 and meet all eligibility criteria. Students who’ve earned a 3.5 minimum high school GPA and an ACT score of 30 or higher are guaranteed to receive MTSU’s Trustee Scholarship, which pays $20,000 in four annual installments of $5,000.

MTSU senior Kami Dyer, a Buchanan Scholar and biochemistry major, talked about “so many opportunities” the university has provided, including three study-abroad trips.

For more information about undergraduate scholarships at MTSU, visit www.mtsu.edu/financial-aid/scholarships. 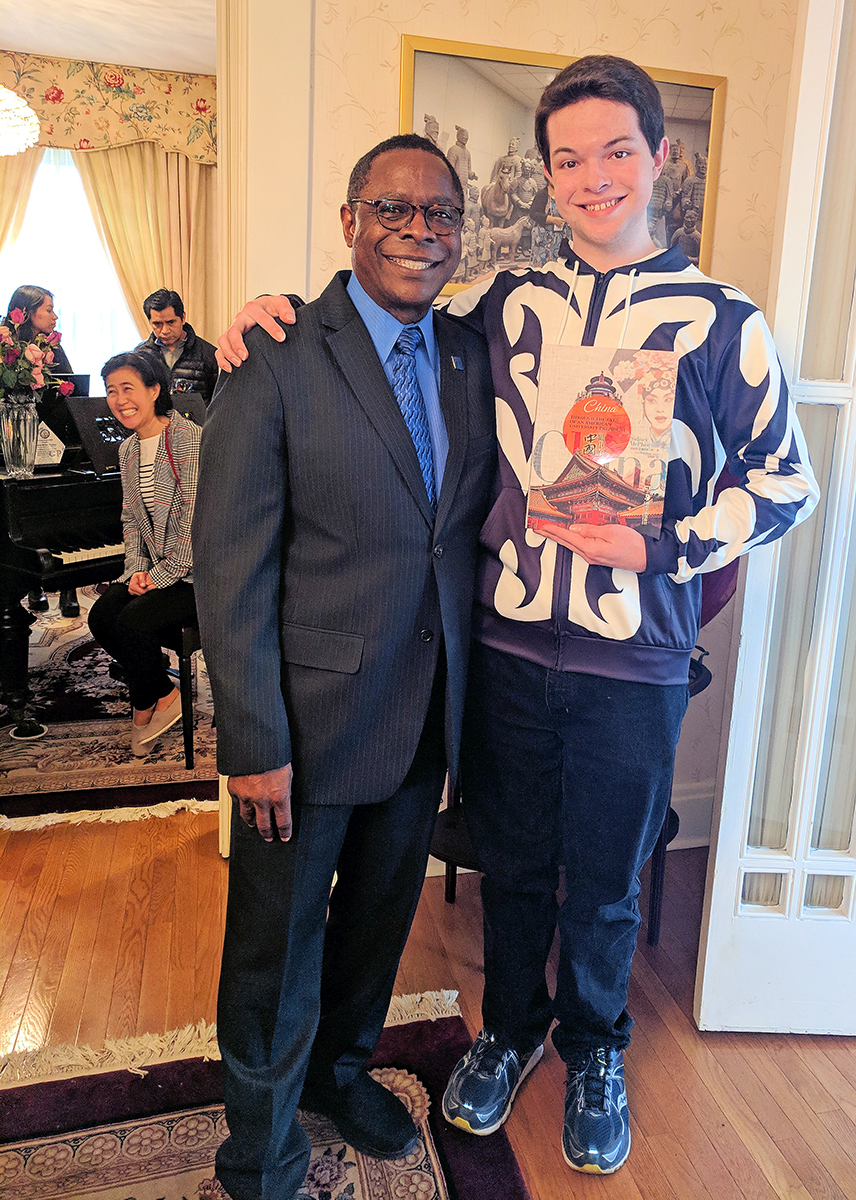 MTSU President Sidney A. McPhee, left, presents Presidential Scholarship recipient Caelan Cox with a copy of his book of photographs from visits to China Feb. 18 during the Chattanooga, Tenn., teenager’s visit for the Celebration of Scholars event. The pair originally met at the MTSU True Blue Tour event in Chattanooga in October 2018 when Cox painted his face blue for the occasion. (Photo by Trish Cox) 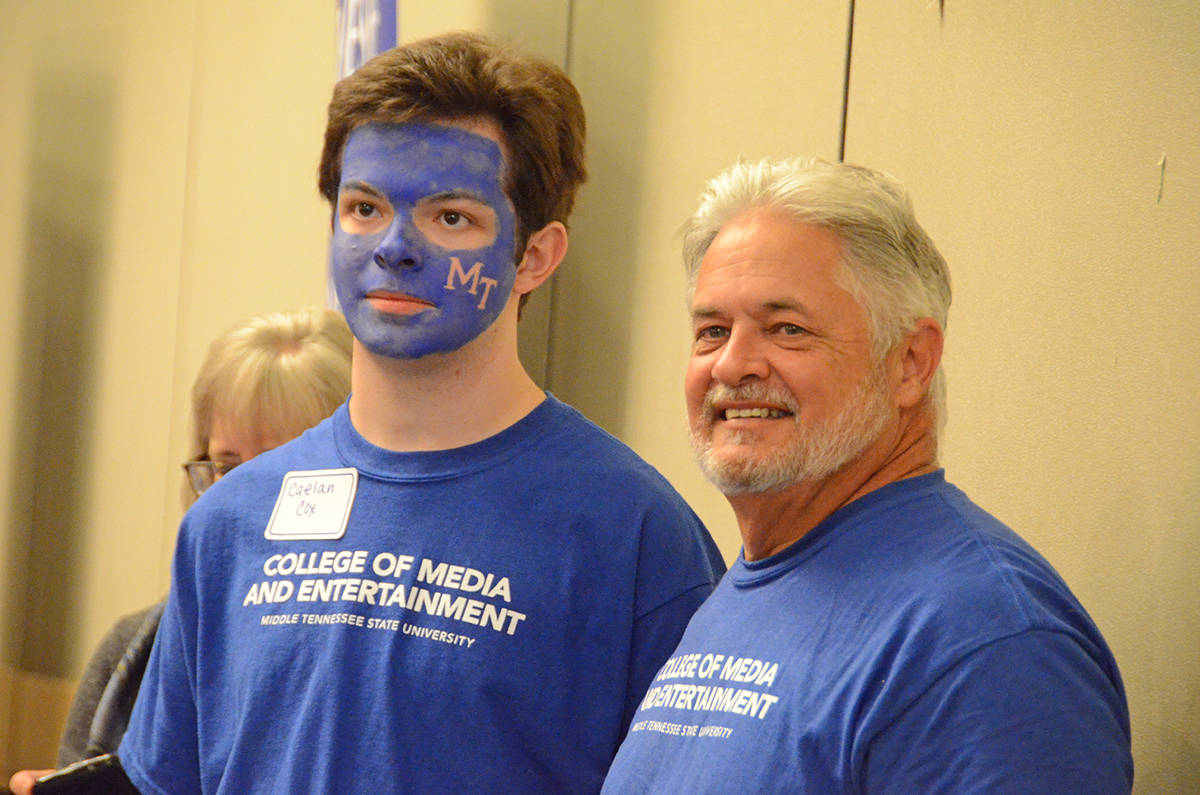 Caelan Cox, left, was all in last October during MTSU’s True Blue Tour visit to Chattanooga, Tenn., sporting a painted face and wearing a College of Media and Entertainment T-shirt for the special event. Homeschooled by his mother Trish and planning to study animation starting this fall, he is shown with his father, David Cox. (MTSU file photo by Randy Weiler)