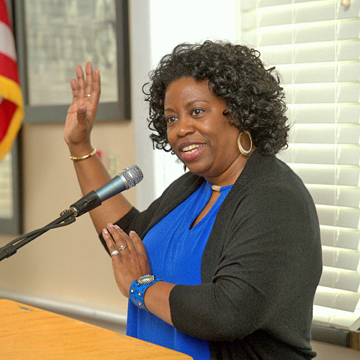 “It’s one thing to give honor … but you also have to learn to receive honor.”

Those words came Thursday from an “overwhelmed” Dr. Michaele Chappell, who knows how to receive honor—with gratitude.

The MTSU professor received multiple kudos from faculty, students and community leaders in receiving the 2015 John Pleas Award, presented annually to a black faculty member who has demonstrated excellence in teaching, research and service.

Chappell, a professor of mathematics education and program coordinator for the Masters of Science in Teaching program, was presented with the honor in a Feb. 26 ceremony in the Tom Jackson Building as part of MTSU’s celebration of Black History Month.

In accepting the award, Chappell said, “When colleagues take the time to honor you for your work, for your efforts, all I can think about is what my mom used to teach me … just to be grateful.”

Dr. Bud Fischer, dean of the College of Basic and Applied Sciences, praised Chappell in prepared remarks as “a first-rate scholar, teacher and co-learner.”

Chappell has authored or edited five manuscripts or books, authored more than two dozen academic articles and book chapters and given more than 65 presentations at conferences.

“Dr. Chappell has been a wonderful mentor during my graduate studies and her guidance has provided me with experiences that have supplemented my coursework nicely,” said Derek Smith, a Nashville-based graduate student in MTSU’s Mathematics and Science Education program.

Among the grants Chappell has been awarded is the $2.3 million National Science Foundation’s Robert Noyce Teaching Scholarship, for which she is co-principal investigator.

Chappell also has served in multiple positions with the Benjamin Banneker Association, enabling her to mentor STEM teachers working in African-American communities.

“You are strong, accomplished, you are stable and wise, and, in my words, you are a ‘bad chick,’” said graduate student and Rutherford County Schools teacher Melnequa Holloway of Antioch, Tennessee.

Chappell, who has worked at MTSU for 14 years, earned her bachelor’s and master’s degrees from Georgia Southern University in 1981 and 1983, respectively, and her doctorate from Florida State University in 1991.

The John Pleas Faculty Award was established in 1997 to honor Dr. John Pleas, MTSU professor emeritus of psychology and recipient of an MTSU Outstanding Teaching Award in 1999.

Previous winners of the Pleas Faculty Recognition Award since its inception are:

For more information, contact Jonell Hinsey, director of the Intercultural and Diversity Center and chair of the MTSU Black History Month Committee, at 615-898-5797 or jonell.hinsey@mtsu.edu.