“This campuswide effort shows what it really means to be ‘True Blue,’” said MTSU President Sidney A. McPhee. “The fact that we set another record for giving shows the caring nature of our faculty and staff and reflects a collective acknowledgement that it’s important to give back to this great community.

“I again applaud the volunteer team that organized this year’s very successful effort.”

MTSU’s annual Charitable Giving Campaign is a monthlong effort by faculty and staff to support worthy causes. The campaign is fueled largely by monthly payroll deductions from employees over the next year but also allows one-time, lump-sum gifts at the donor’s discretion.

During the Oct. 1-Nov. 1 campaign, participants designated gifts to organizations from a list of 10 independent charities and three federated groups of charities, including Community Health Charities, Community Shares, and local United Way organizations.

Throughout the month, participants were eligible for weekly drawings for a variety of “True Blue” swag and reserved parking spaces. All employees were eligible for the drawings, regardless of donation decision, as long as they registered at the campaign website, which was updated this year by the university’s Information Technology Division. 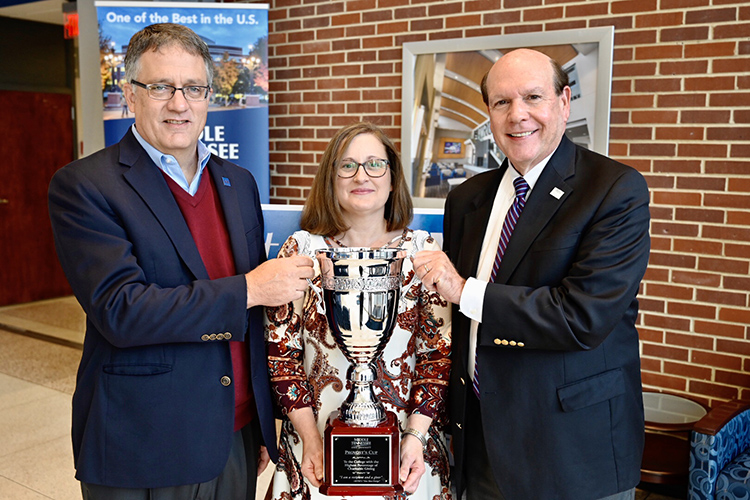 MTSU Provost Mark Byrnes, left, presents the 2019 Provost Cup to the Jennings A. Jones College of Business, represented by Teena Young, center, operations administrator for the college, and Dean David Urban for the college’s seventh straight win. The Provost Cup is a friendly competition between academic units donating to the university’s annual Employee Charitable Giving Campaign that is awarded to the college with the highest percentage of employee participation.(MTSU photo by Andrew Oppmann)

Provost Mark Byrnes again thanked the faculty and academic units for their tradition of participation in the campaign and — for the seventh straight year — presented the Provost Cup to Dr. David Urban, dean of the Jennings A. Jones College of Business.

The Provost Cup competition is a friendly one between academic units. The cup is awarded to the college with the highest percentage of employee participation.

“This is a reflection of the high level of concern Jones College faculty and staff have for the broader community,” Urban said. “They have big hearts, and I’m extremely proud of them.”

Urban, who is current Board of Directors chair of one of the campaign’s beneficiaries, the United Way of Rutherford and Cannon Counties, said that the funds MTSU employees contribute to charitable organizations such as United Way help improve the health, education and financial stability of those served by the numerous nonprofit community service agencies in the area.

“Even though we’re a very prosperous community that’s growing really quickly, that just means the needs that people have are that much greater,” he said.