Furry friends can take part in.. 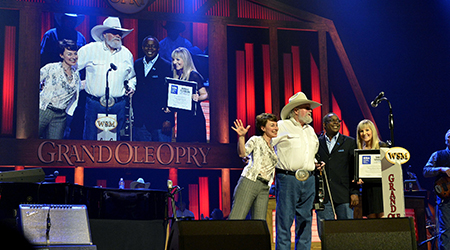 MTSU President Sidney A. McPhee surprised Daniels with a presentation on the stage of the Grand Ole Opry Saturday night that formally announced the Charlie Daniels Scholarship at the Murfreesboro university.

“On behalf of 26,000 students at Middle Tennessee State University, it is my honor and privilege to announce this scholarship that will benefit the students in our recording industry management program,” McPhee said, adding that the scholarship “honors one of the outstanding musicians” in the music industry.

Starting in fall 2014, a $1,000 scholarship will be awarded each year to a student in the MTSU College of Mass Communication’s Department of Recording Industry.

The International Entertainment Buyers Association established the MTSU scholarship in honor of Daniels with a $25,000 endowment. The IEBA is a Nashville-based, nonprofit trade organization for live entertainment industry professionals.

“Charlie Daniels spends his life giving, so it’s an honor to have the opportunity to give on his behalf,” said IEBA Executive Director Pam Matthews. “This scholarship helps ensure his legacy will continue through the next generation of music business leaders.”

“I am so honored,” said Daniels, who has lectured at MTSU in the past. “It was such a surprise. I have the greatest respect for higher education. To be a part of somebody getting their education, especially in that industry … is special to me.”

Joining McPhee and Daniels on stage for the presentation was MTSU student Jordan Todd, a junior recording industry major from White Oak, Texas.

“MTSU is such a great school. I think it’s awesome for students to have an opportunity to get scholarships like this, and having his name on the scholarship is really special,” Todd said.

“Having that financial aid is amazing because it allows students to focus on what they’re in school for.”

Daniels has been honored by MTSU before. In 2009, MTSU presented him with the Joe M. Rodgers Spirit of America Award, an honor presented to a businessperson who has demonstrated the best of the spirit of America through significant contributions in government, education and/or civic and charitable organizations.