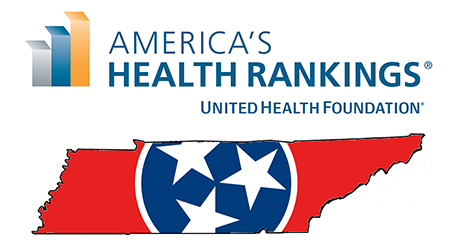 The director of MTSU’s Center for Health and Human Services says the latest state-by-state health ratings show Tennessee has made definite progress in some areas but continues to struggle in others.

Dr. Martha Jo Edwards says she is encouraged by Tennessee’s overall rank of 39, an increase of two positions, in the 2012 “America’s Health Rankings” released Dec. 11 by the United Health Foundation.

You can read the report on Tennessee by clicking on the “America’s Health Rankings” logo at right.

Edwards, who also holds the Adams Chair of Excellence in Health Care Services, notes that Tennessee is tops in the nation for a low percentage of binge drinking. The state also has higher per capita public health funding, 21st in the country, than most states.

While the state ranks 48th in sedentary lifestyle and 45th in infant mortality, the center has been ahead of the curve in working to improve public awareness of healthy lifestyles to lower these numbers.

“For three years, the center has funded community workshops in diabetes self-management,” says Edwards. “We address nutrition, diet and other factors in a six-week program.”

The “Yes I Can Diabetes Self-Management Program,” administered with the Primary Care & Hope Clinic in Murfreesboro, empowers residents diagnosed with Type 2 diabetes and pre-diabetes to manage their conditions.

And on Nov. 30, in partnership with the Tennessee Department of Health, the center conducted a training workshop for professionals who teach parents in high-risk populations how to care for their babies.

Edwards says a surprising number of infant deaths in Tennessee occur due to their parents’ failure to adhere to proper sleeping habits.

The center also encourages women of childbearing age to be good to their babies before they’re born. Through a program funded by the March of Dimes, the center uses social media and on-campus gatherings to talk to young women about getting their bodies ready for healthy pregnancies down the road.

The CHHS also is in the second year of a three-year grant to fund the “Tennessee Anti-Tobacco Advocacy Initiative,” a project to improve smoking cessation in adults and youth at the grass-roots level.

“By collaboration with state agencies, organizations and volunteers, we can change risky behaviors by getting the right information into people’s hands,” Edwards says.

For more information about the center’s efforts, contact Edwards at 615-898-2905 or martha.edwards@mtsu.edu.