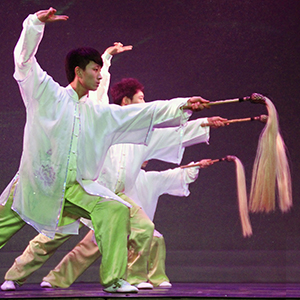 Fans of the martial arts have a treat in store at Middle Tennessee State University, thanks to the Confucius Institute at MTSU.

Performers from the Beijing-based Capital University of Physical Education and Sports demonstrate the use of “fu chen,” which is a weapon but also as a common instrument in Taoism rituals to sweep away vulgarity. This is part of a performance titled “Kai Yuan,” which will be demonstrated at the Martial Art Extravaganza Monday, April 22, in Murphy Center. (Photo submitted)

The Capital University of Physical Education and Sports will present an exhibition of Chinese kung fu at 7 p.m. Monday, April 22, at Murphy Center.

Composed of faculty and students from the Beijing-based institution, many members of the performance troupe are national and international champions of various styles of martial art.

Among the performers will be Fengmei Li, who has been a stuntwoman in several movies and was the choreographer for Zhang Ziyi, the leading actress in the movie “Crouching Tiger, Hidden Dragon.”

The event, which is presented by MTSU’s Confucius Institute and sponsored by the Chinese Language Council International, is free and open to the public.

For more information, contact the Confucius Institute at 615-494-8696 or cimtsu@mtsu.edu. For parking information, go to http://tinyurl.com/MTParkingMap12-13.