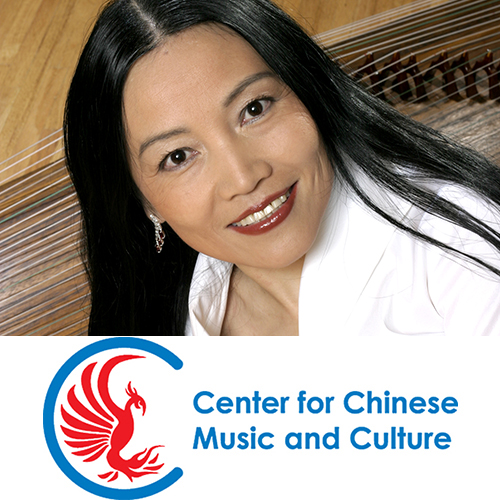 The Orient is going to the orchestra in Music City USA.

Dr. Mei Han, director of the MTSU Center for Chinese Music and Culture, poses with the 21-string instrument called a zheng that she plays professionally in addition to her academic expertise. Han and three other musicians will perform Saturday, Oct. 22, at the Schermerhorn Symphony Center’s Free Day of Music Saturday.

The MTSU Chinese Music Ensemble will perform at the Nashville Symphony Orchestra’s Free Day of Music from 2:30 to 3:15 p.m. Saturday, Oct. 22, in the Curb Family Music Education Hall at Schermerhorn Symphony Center, One Symphony Place in Nashville.

Dr. Mei Han, director of the MTSU Center for Chinese Music and Culture, will join three guest instructors for an afternoon concert of Chinese instrumentals.

Han is a world-renowned performer on the zheng, a 21-string instrument known as a long zither.

The other three musicians are Li Zengguang on the Chinese bamboo flute, Ji Jie on a two-string fiddle called an erhu and Mi Xuanye on a yangqin, which is a dulcimer played with a hammer instead of being plucked.

All three are instructors funded by the Confucius Institute at MTSU, which works to create opportunities for exchange and collaboration between communities in Tennessee and China.

“My goal is to give (the general public) this opportunity to know about Chinese music, but also for the symphony people to see the quality of our musicians,” said Han.

The Center for Chinese Music and Culture at MTSU exhibits Chinese musical instruments, hosts visiting scholars and artists, presents concerts and workshops and offers outreach school and community programs in the area.