‘MTSU On the Record’ compares .. 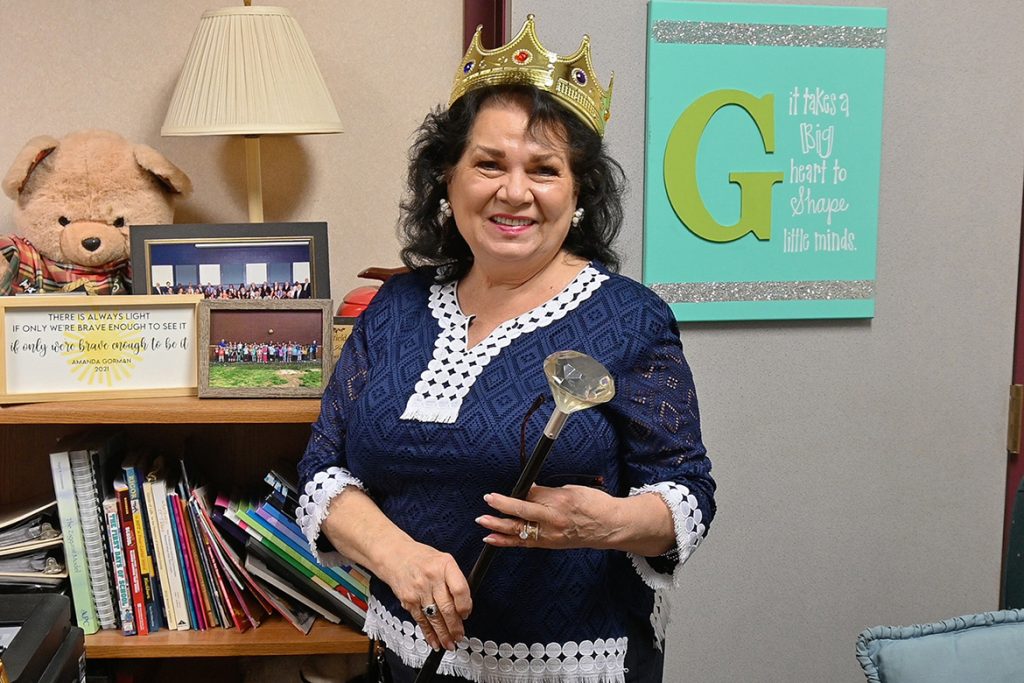 Judy Goodwin, principal of Barfield Elementary School and a Middle Tennessee State Elementary School alumna, celebrates in her office March 10, 2021, with a crown and scepter presented by her school after she was named Principal of the Year for Rutherford County Schools. (MTSU photo by Stephanie Barrette)

Stefanie Edgell, another College of Education alumna and fifth-grade teacher, was recognized as Teacher of the Year at Christiana Elementary. 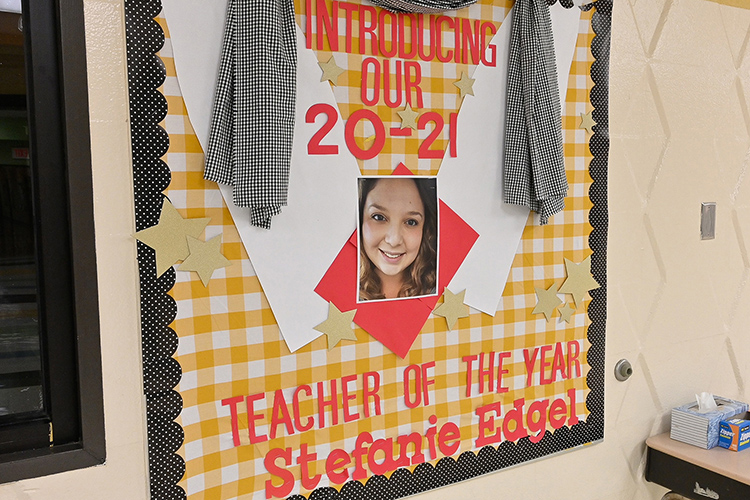 A colorful bulletin board celebrates MTSU alumna Stefanie Edgell, a fifth-grade teacher at Christiana Elementary School, who won the Teacher of the Year Award at her school this year. (MTSU photo by Stephanie Barrette)

“It’s very humbling for the second time to represent not only Barfield, but Rutherford County Schools, as well,” Goodwin said. “I am only as good as the people that have supported and continue to support the work that I seek to do…. I always want to live up to the trust that those folks have placed in me.​”

Goodwin has been the principal of Barfield Elementary for 21 years. She began her career in education after graduating from MTSU in 1970 and was the first member of her family to go to college when she attended MTSU as part of the Honors Program at 16 years old.

“Becoming part of campus life and being introduced to post-secondary courses gave me a thirst for more, and I couldn’t wait to get back to MTSU,” Goodwin said. “Majoring in elementary education allowed me to take a range of classes that prepared me for the teaching profession taught by legendary professors, such as Dr. Mary Tom Berry.”

Beginning her relationship with MTSU first as a student and then continuing it as a school administrator over the past 20 years, Goodwin has witnessed the College of Education evolve to meet the demands of a changing education environment.

The college “remains current with educational trends and practices, consistent with state requirements for teacher evaluation and increased its hands-on experiences in a variety of environments,” she said. 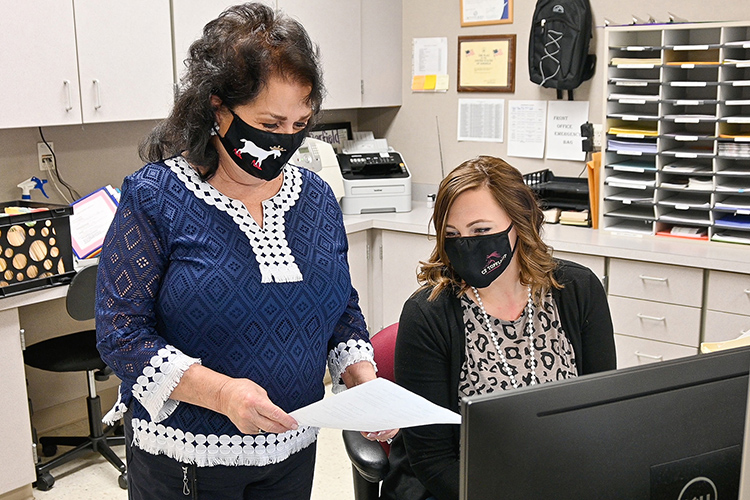 Edgell, a fifth-grade teacher, was excited, overwhelmed and humbled by the honor. (The school captured the moment her administrators surprised her with the award on Twitter here.)

“It was announced to me in a surprise over the intercom and with my students,” Edgell said. “They went crazy like we just won the Super Bowl, and they were all trying to give hugs and cheers, and I was doing everything I could not to cry. It was a wonderful experience.”

Edgell earned her degree in the College of Education as part of the job-embedded program. 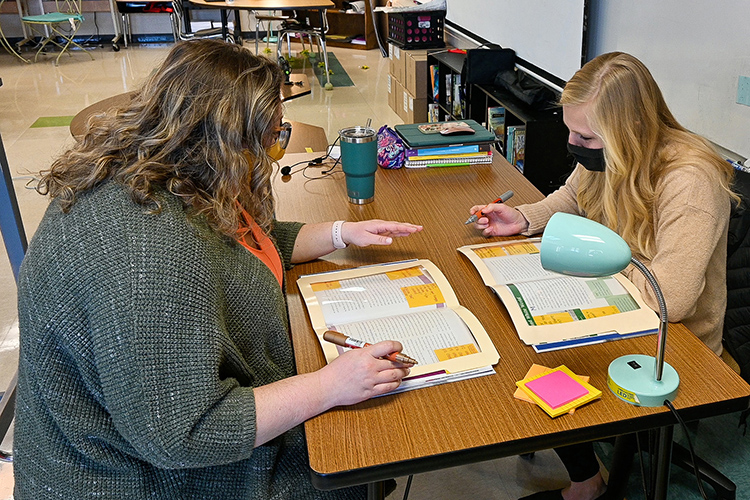 MTSU alumna Stefanie Edgell, left, a fifth-grade teacher at Christiana Elementary School who recently won the Teacher of the Year Award, plans lessons with her student teacher, right, in her classroom on March 10, 2021. (MTSU photo by Stephanie Barrette)

Patti Agnew, the job-embedded intake coordinator for the college, explained that it is a unique degree path toward teacher licensure that allows educators to fulfill licensure requirements, essentially taking education classes at MTSU, while being employed as a teacher in their own, real classroom at the same time.

Good candidates for the program must meet a list of requirements, such as having a bachelor’s degree, to qualify. For more information, visit MTSU’s Office of Teacher Licensure webpage here. 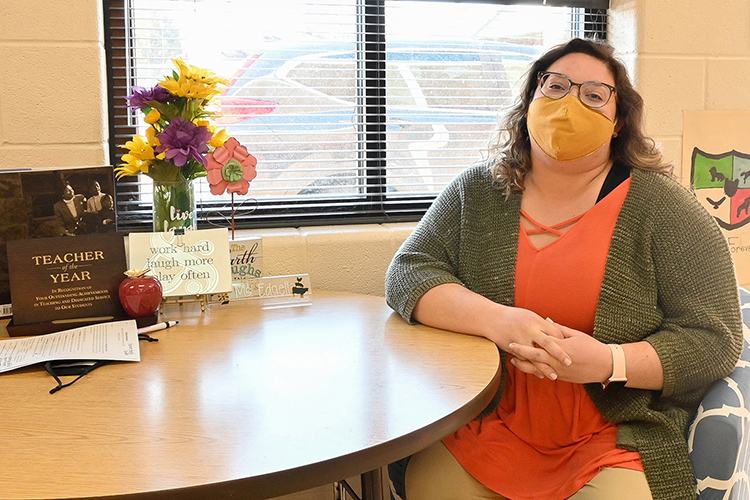 Stefanie Edgell, a Middle Tennessee State University alumna and fifth-grade teacher at Christiana Elementary School, discusses winning the Teacher of the Year Award during a visit to her classroom on March 10, 2021. (MTSU photo by Stephanie Barrette)

For Edgell, the program was an amazing fit because she could directly implement her knowledge from the MTSU classroom into her elementary classroom the very next day.

“It (combined) that real life experience that you want when you’re student teaching, but it was my (own) classroom,” Edgell said. “Then I could come back and share that with my peers and get feedback and make changes.”