In the News: Capitol rioting, ..

College of Basic and Applied S.. 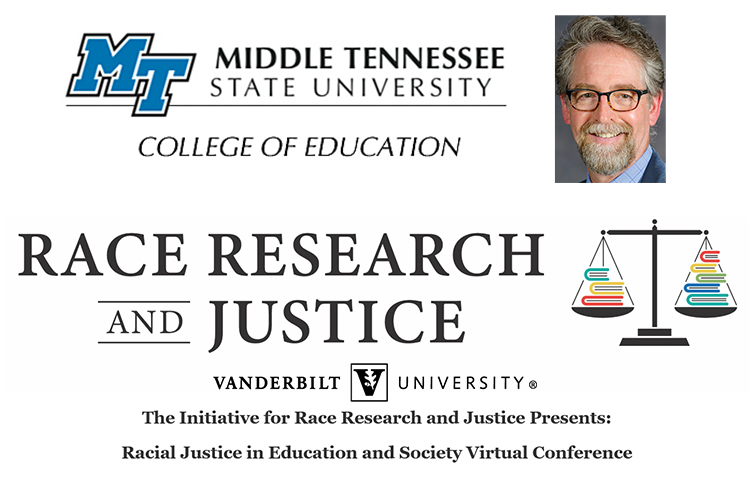 MTSU’s College of Education continues to evolve from its foundational role in the university’s beginnings to explore the challenges and complexities surrounding education both inside and outside the classroom in the 21st century.

In a year in which racial and social justice issues have remained at the forefront of the national dialogue, the College of Education joined numerous institutions from throughout the country in co-sponsoring the inaugural Racial Justice in Education and Society Virtual Conference hosted by Vanderbilt University.

The daylong conference was held in early December, drawing participants from throughout the nation and world, including a strong representation from MTSU and the College of Education, which continues to serve as one of the top producers of teaching graduates in the state.

MTSU College of Education interim dean Rick Vanosdall said the conference provided a great professional development opportunity for faculty and staff, with the sponsorship also allowing participation from other colleges across the university, local school district educators and those involved in organizations such as the Tennessee Educators of Color Alliance.

Vanosdall said the education profession has long recognized an imbalance of sorts within the teaching profession, particularly within K-12 education, where classrooms are predominantly led by white females even as the country’s student population becomes more diverse and where cultural competencies between teacher and student don’t always match — whether racially and/or socioeconomically or in terms of issues such as ablism and life experiences in general.

“A key skill for a classroom educator is to be able to connect with their students, and even if they don’t have the same experiences, to be able to listen, to learn and to engage,” Vanosdall said. “We’re there to do more than simply convey the conventions and disciplinary content information of the dominant culture. We’re there to encourage free thought, critical thinking, and reflective action.”

Vanosdall said he was encouraged to get the college involved in the conference by colleagues within the educator’s alliance, where he serves on a statewide advisory panel, and Louis Woods, associate professor of African American history and MTSU’s inaugural Presidential Fellow for Social Justice and Equality. Woods was very familiar with the work of the conference organizer, Richard Milner, director of Vanderbilt’s Initiative for Race Research and Justice and Cornelius Vanderbilt Professor of Education. 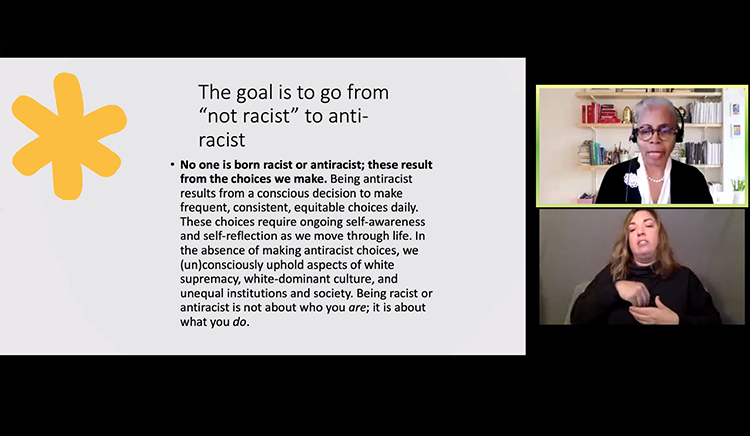 This screen grab from the the inaugural Racial Justice in Education and Society Virtual Conference hosted by Vanderbilt University on Dec. 5 shows Dr. Gloria Ladson-Billings, top right, president of the National Academy of Education, one of three keynote speakers during the daylong event, which was co-sponsored by the MTSU College of Education.

‘… classroom teacher as a calling’

The conference agenda featured a roster of experienced researchers, educators and thought leaders, including keynote addresses by Marc Lamont Hill, who is Steve Charles Professor of Media, Cities and Solutions at Temple University; Gloria Ladson-Billings, president of the National Academy of Education and professor, emerita, and former Kellner Family Distinguished Professor in Urban Education at the University of Wisconsin-Madison; and Bettina Love, an award-winning author and Athletic Association Endowed Professor at the University of Georgia.

Hill, whose livestreamed address drew close to 1,000 viewers, focused a good part of his presentation on the severe damage that mass incarceration has inflicted on Black people and communities of color, calling for a dismantling of the school-to-prison pipeline that snuffs out so much potential in those communities across this nation.

“Prison culture has people conditioning bodies for prison life rather than education and democratic citizenship,” Hill told the audience. “We have to create a pedagogy that is not yet. We have to imagine radical and new possibilities. … We fight for the world that is not yet, yet we can’t ignore the realities of the world right now.”

In addition to the keynote addresses, breakout sessions were available throughout the day as expert moderators discussed topics ranging from culturally responsive STEM practices to race and sports and from anti-racist leadership in education to restorative practices in communities, schools and legal systems.

“The conference brought forth voices that I’ve been reading for decades,” Vanosdall said. “These kinds of conversations have been within the research community and in pockets across the country. But I think there’s been an energy and level of interest and awareness among predominantly white educators in this country that we have to do more.”

Vanosdall noted the College of Education’s ongoing collaboration with the State Collaborative on Reforming Education, also known as SCORE, through a three-year renewable agreement signed last summer to develop an innovative strategy for college to continue to improve and evolve the program to ensure graduates receive excellent teacher preparation.

Within recent months, MTSU’s clinical practice program for student teachers was among only 33 traditional elementary programs out of more than the 1,100 evaluated nationwide to earn an “A” grade in the National Council on Teaching Quality’s 2020 “Teacher Prep Review.”

But the college’s work with SCORE has also highlighted the need for the college and the state overall to focus on diverse learners and the need to diversify the teaching ranks in Tennessee, Vanosdall said. That means taking a hard look at the College of Education’s programs and practices to make sure that it’s not only welcoming to people of color, but that it is also positioned to well prepare every teacher candidate to be effective for every student they will serve in their classroom roles.

With a wave of teacher retirements ongoing and the stressors that make a career in education a daunting choice, recruiting future educators poses its challenges, Vanosdall said. But the pandemic’s impact, with widespread virtual learning forcing parents across the country to face the realities of what teachers face daily in their classrooms and now in this Zoom-dominated environment, may enhance the overall society’s appreciation for such a noble and critical profession.

“I do see education and being a classroom teacher as a calling,” he said, adding that the college is looking into pursuing “grow your own” pathways to expand opportunities for nontraditional candidates to become classroom teachers.