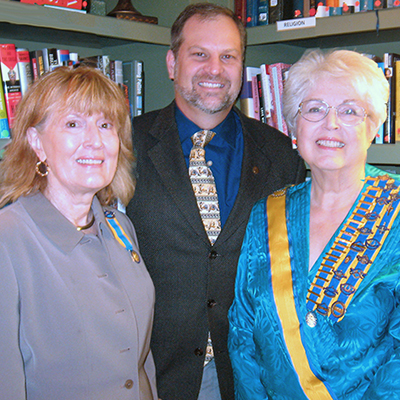 For the past 20 years, the Dorothy Williams Potter Scholarship for American Historic Preservation has enabled scholars to achieve careers as historians.

Bob Beatty, an MTSU doctoral student in MTSU’s public history program, is the 2015 recipient of the $500 stipend.

Beatty, who works full-time and is the father of two children, also is chief operating officer of the Nashville-based American Association for State and Local History. He calls the scholarship “manna from heaven.”

The Tennessee Society Colonial Dames XVII Century established the scholarship in 1993 to honor Potter for her service to the organization. The first scholarship was granted in 1995, and the stipend amount varies.

The Thomas Lygon and Prudhomme Fort chapters, whose members are descendants of patriots who provided some service to what eventually became the American colonies before 1700, solicit and manage the funding.

“It has to be documented with, we hope, primary sources,” said Potter of the members’ lineage.

A former scholarship chairman of the national Colonial Dames organization, Potter is the author or editor of more than 100 historical and genealogical publications and has been listed in Who’s Who of American Women.

The group houses the scholarship at MTSU’s Center for Historic Preservation at her request.

“We have good people,” Potter said. “We need to take care of them.”

Beatty professes a love of history that goes back to family tales of a seafaring great-grandfather who was the captain of a ship called the Lindhurst.

“History was a part of the stories that we heard,” Beatty said.

Within the next two to three years, Beatty hopes to have earned his doctorate. He is using MTSU’s Center for Popular Music as a resource for his dissertation on the Allman Brothers Band and its place in American music.

From visiting “The Big House,” a Victorian-style dwelling where the band once lived in Macon, Georgia, to digging for rare interviews with the late band members Duane Allman and Berry Oakley, Beatty said he knows he has his work cut out for him.

“Sources are going to include student newspapers and the alternative press,” he said. “It’s going to be a challenge because there are not a lot of sources from that era.”

To contribute to the Dorothy Williams Potter Scholarship Fund, contact the MTSU Office of Development at 615-898-2902 or devofc@mtsu.edu or go to www.mtsu.edu/development.

To find out more about the Center for Historic Preservation, go to www.mtsuhistpres.org.