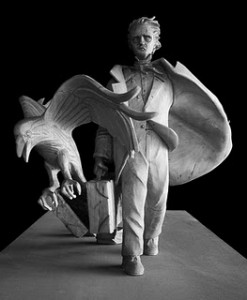 Earlier this month in Boston, Massachusetts, on the campus of Emerson College, Boston Mayor Thomas Menino unveiled the design proposals by the three finalists of the Edgar Allan Poe Square Public Art Project. Selected from a pool of 265 artists from 42 states and 13 countries, the finalists hope their work will be chosen for installation in the city-owned plaza located at the southeast corner of Boylston Street and Charles Street South — a place named Edgar Allan Poe Square. And seated front and center at the unveiling of the public art proposals was MTSU professor and Boston Athenæum Research Fellow Dr. Philip Edward Phillips.

Phillips, interim associate dean of the University Honors College and a noted Poe scholar, is among just a handful of dignitaries – mostly from Boston — seated on the Poe Square Public Art Committee, the group spearheading the legendary writer’s long-overdue public art recognition in his home city. Others on the committee include Sam Cornish, Poet Laureate of the City of Boston, Paul Lewis, noted Poe scholar and professor in the Department of English at Boston College, and Dan Currie, president and co-founder of the Edgar Allan Poe Foundation of Boston.

How does an MTSU professor end up in such a prominent position caretaking the legacy of one of America’s greatest writers in one of America’s greatest cities? Phillips’ Poe credentials are substantial. His research on Poe’s oftentimes vindictive relationship with his home city, and specifically Poe’s appearance at the Boston Lyceum 1845, have garnered Phillips deserved attention among Poe scholars and enthusiasts. Phillips’s work appears in Poe Studies, The Edgar Allan Poe Review, and the MLA Approaches to Teaching Poe’s Prose and Poetry. Formerly a member of the editorial board of the Edgar Allan Poe Review, Phillips was recently elected to the executive committee of the Poe Studies Association.

Very little attention has been paid to Poe’s relationship to the city of his birth. And, in fact, most people associate Poe more strongly with the city of Baltimore — a place that celebrates Poe’s literary achievements with far greater visibility than Boston. Witness the naming of that city’s professional football squad, the Ravens, a reference to Poe’s famous macabre poem. 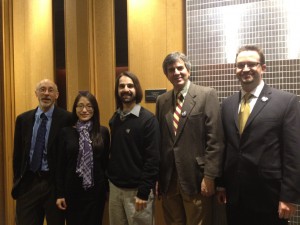 Dr. Phillips with other Edgar Allan Poe Foundation board members at recent meeting in Boston.

The reason is that Poe’s relationship with Boston could perhaps best be described as love-hate in nature. “Poe didn’t particularly like the Boston literary establishment, including writers like Henry Wadsworth Longfellow and Ralph Waldo Emerson, whose aethestic notions were very different,” Phillips explains. “There was a sense that many New England writers came from affluence, that they had the leisure to write, while Poe existed in crushing poverty, and was always an outsider.” Poe even accused many New England authors, notably Longfellow, of plagiarism.

But there was another side to Poe’s relationship with Boston as well. “Poe’s mother, whom he adored and idealized, and who died while Poe was a child, left him a portrait on which she wrote for him always to remember Boston, the city of his birth, and where she had so many friends. That always stuck in Poe’s mind,” says Phillips. “So when he left Richmond, Virginia, after he had a falling out with his foster father, John Allan, he went to Boston. That was where he went to establish himself as a writer, and eventually, where he first published poetry.”

Phillips’ research in these areas led to his appointment in 2008 to a fellowship from the Athenæum library in Boston. That, in turn, led to a relationship with Boston College professor Paul Lewis, who initiated the idea of naming a square in Boston after Poe, curated an exhibition Poe and Boston at the Boston Public Library, and also convinced the Boston Art Commission to sponsor a work of art commemorating Poe in the city – a new landmark sure to last hundreds of years.

The end result? When it comes to keeping alive the legacy of great American poet Edgar Allan Poe, Middle Tennessee State University professor Philip Edward Phillips is right in the middle of it all.