In the News: Venezuela, Grammy..

Ana Cannon of Clarksville, Tennessee, and Joseph Howard of Murfreesboro are firmly committed to attending MTSU starting this fall.

Prospective Buchanan Scholar Emma Beard of Clinton, Tennessee, also wants to come to the Murfreesboro university, but with a 35 ACT score and a 4.47 GPA, other in- and out-of-state public and private schools are still knocking on her door. 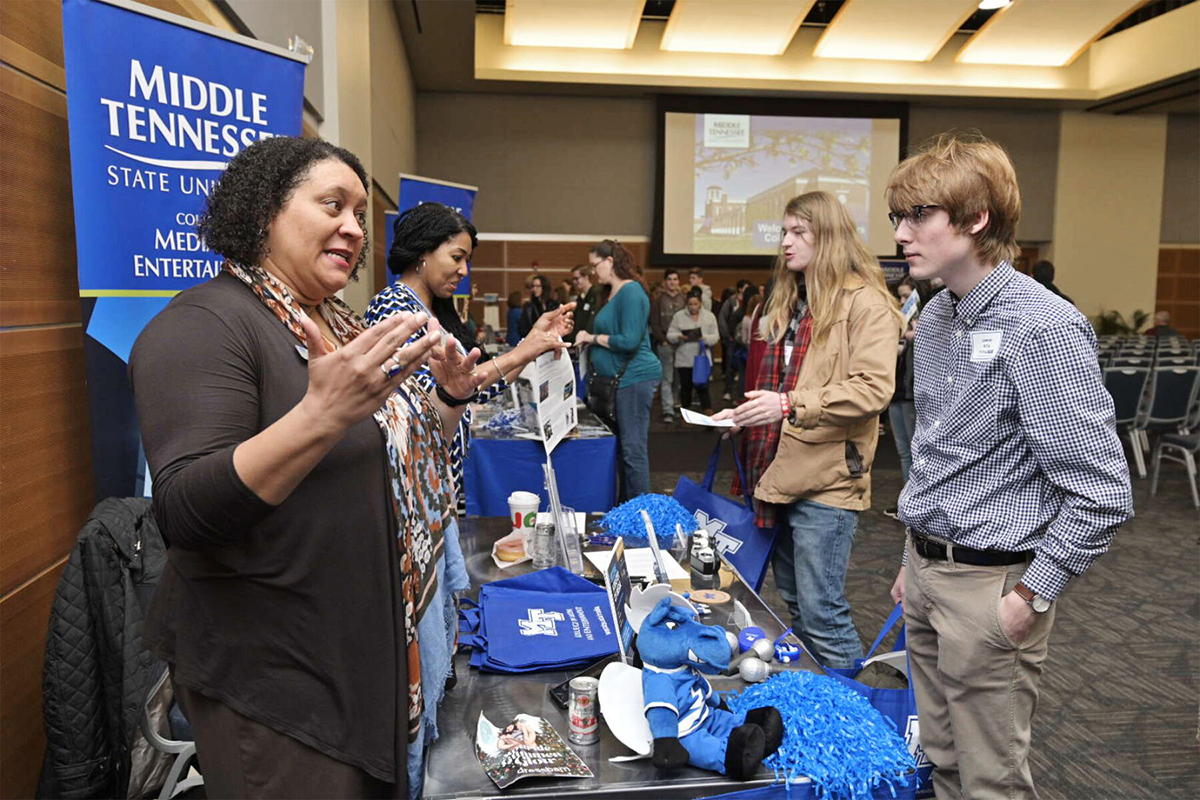 For prospective students, the Honors College provides the academic excellence and nurturing environment of a small, select, private liberal arts college within the setting of a major university. It also provides expert faculty, unique curricular and extracurricular experiences and “Collage,” an award-winning arts and literary magazine.

“I’m committed to come here,” said Howard, 18, a Siegel High School senior with a 3.8 high school GPA, 4.0 dual-enrollment GPA and 24 ACT who’s awaiting his second ACT results. “I toured other colleges and waited for something to click (during his visit) for it to feel right. This place really feels like home.”

Howard, who plans to study political science or history and minor in sociology, attended the open house with his mother, Daphne Howard.

Cannon, 17, a West Creek High senior and salutatorian with a 4.0 GPA and 26 ACT, said she “really liked the atmosphere and the campus life. It has a big feel, but it seems small.”

“MTSU really wanted me to come. They were always mailing me information. You don’t get that from larger schools,” said Cannon, who attended the open house with her father, David Willequer, a U.S. Army chief warrant officer at Fort Campbell, Kentucky.

She added that she plans to study graphic design in the College of Liberal Arts. 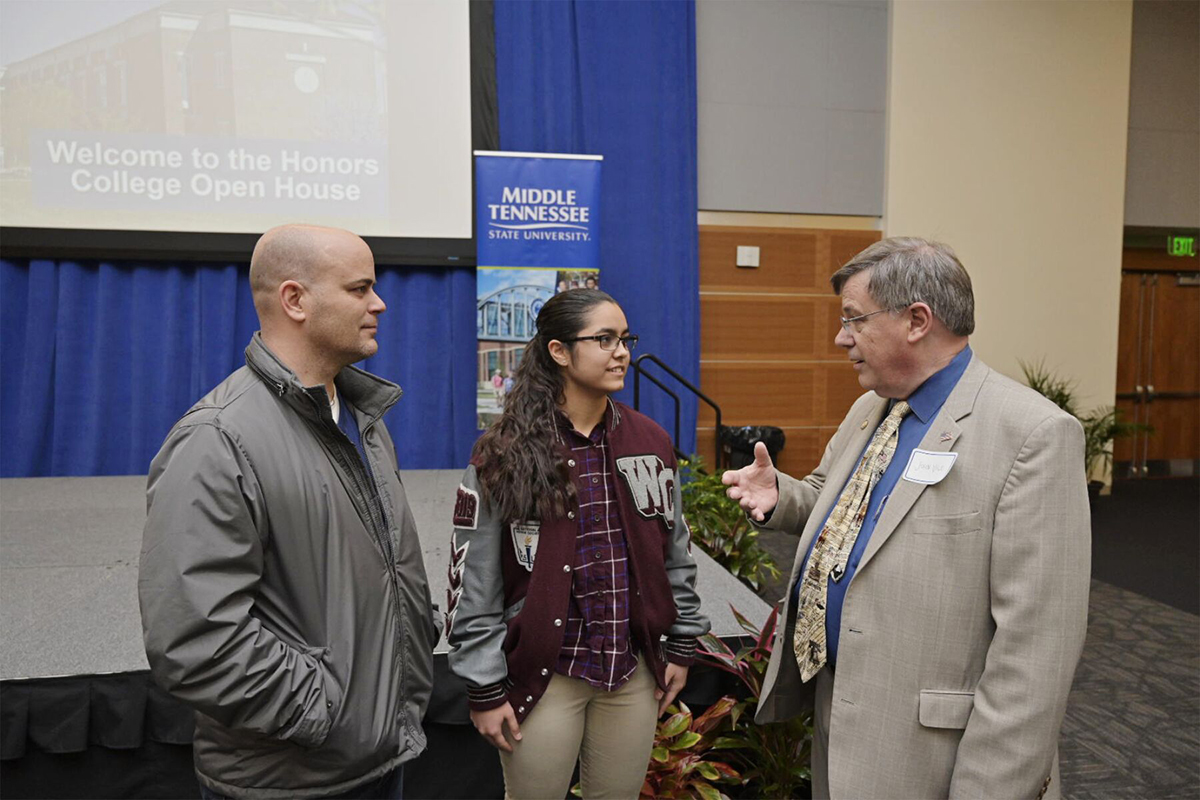 David Willequer, left, and his daughter, Ana Cannon, both of Clarksville, Tenn., listen as MTSU Dean John Vile discusses the University Honors College, which held an open house Feb. 18 for prospective students in the Student Union Ballroom and other campus venues. (MTSU photo by Andy Heidt)

Beard, 18, an Anderson County High School senior and valedictorian, attended a special breakfast held for Buchanan Scholars. It’s the university’s top scholarship and is limited to 20 recipients each year.

“But I haven’t decided on MTSU yet,” she cautioned. “I am waiting on other scholarship offers. So far, MTSU is the sweetest offer I have been given.”

Beard said she “loves the study abroad opportunities” MTSU provides and plans to make her college decision by May 1.

“Students looking at a potential college should look at what they most want in life, and I want to travel. I’m interested in Fulbright,” she continued, referring to the renowned international research study program. 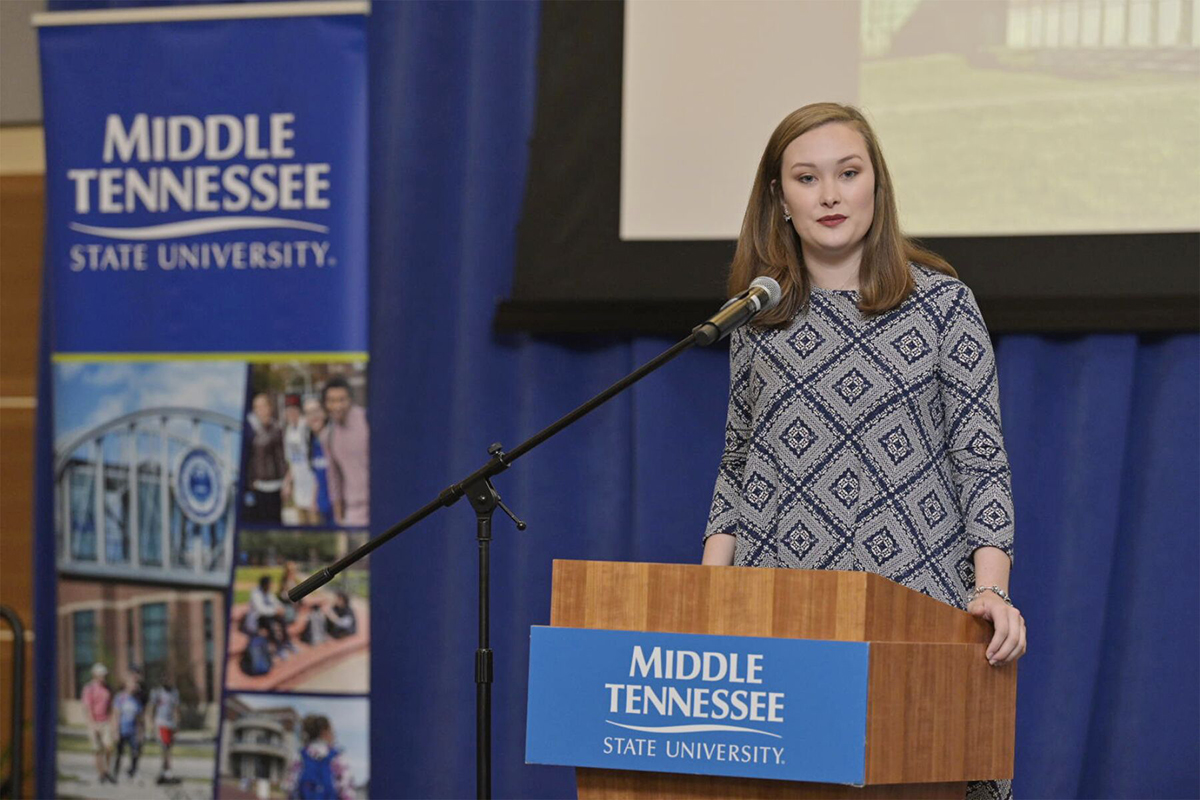 MTSU junior Emily Oppmann, 19, a Buchanan Scholar and biology major and global studies minor, told the guests that she remembered being in the same setting two years ago.

“I have been able to fulfill my dream of study abroad and biology research,” she said, mentioning MTSU’s $147 million Science Building as an incentive to her learning.

“I have been very involved at MTSU,” she continued, referring to her services as a Student Government Association senator at large, Blue Elite Tour Guide and men’s tennis manager. “That’s one of the many reasons I love this school. … I hope you leave excited about the opportunities that await you when you return.”

Visitors learned about campus departments including the School of Music, MT One Stop, the Department of Military Science, the Center for Student Involvement and Leadership and more.

MTSU admissions will offer another MTSU Preview Day on Saturday, March 23. To register for any preview day or other special events, visit www.mtsu.edu/rsvp. 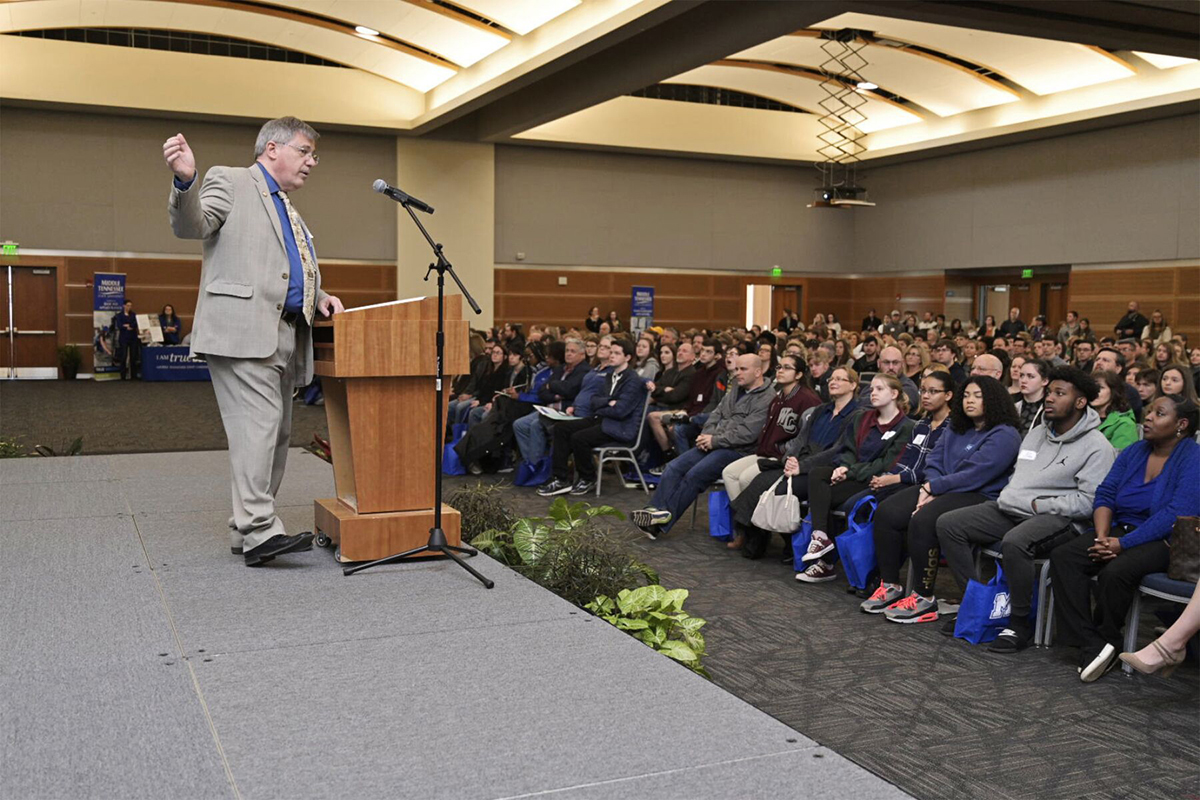 Speaking to a packed crowd of guests, MTSU Dean John Vile discusses the variety of opportunities available to students who are a part of the University Honors College Feb. 18 during the annual Presidents Day Open House. (MTSU photo by Andy Heidt)